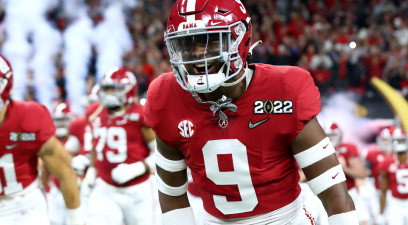 When you’re a fan of a prominent sports team, you think of the players, the coaching staff, and the play-by-play announcers. So when we think of the University of Alabama Crimson Tide, we think of power rushers like Derrick Henry or Josh Jacobs and staff like current head coach Nick Saban and legendary coach Paul “Bear” Bryant. Bama has been considered barely a level below the NFL for a long, long time. But then, those who follow Alabama Football closely, also think of the radio play-by-play broadcast voice of the Crimson Tide, Eli Gold.

Gold has been the voice of Alabama football since 1988. The 68-year-old Brooklyn, New York native, has been a true mainstay in college football since going to Tuscaloosa. Inducted into the Alabama Sports Hall of Fame in 2014, Gold has been both calling football games and hosting two radio shows on the Crimson Tide Sports Network.

Unfortunately, in 2020, Gold’s over 400-game streak ended due to contracting COVID-19. He even had multiple shoulder replacements and managed to never miss a game. But now, Eli Gold’s is going to be out of the radio booth for the length of the football season due to health issues. Bama hasn’t gone into detail as to what the health issues are, however.

In his absence, Alabama basketball play-by-play announcer Chris Stewart is going to step into his shoes for football broadcasts. He’ll also take over hosting duties of “The Nick Saban Show” and “Hey Coach,” Gold’s two radio shows. On “The Nick Saban Show,” the head coach will discuss the team and go into their upcoming weekend opponents throughout the season. “Hey Coach” gives fans the opportunity to get up close with Saban.

Eli Gold started his broadcast career with NASCAR Motor Racing Network before moving on to the Birmingham Barons baseball team, and ultimately landing with Alabama Athletics. He has worked with CBS, NBC, and ESPN as well. Gold has been named Alabama Sportscaster of the Year four times and is as synonymous with Alabama football as the football team itself.

Those will be large shoes to fill, but Stewart will be ready to do so. It will be odd for those tuning in to the radio broadcast for Alabama’s next bid for a national championship to not hear Gold’s iconic voice have the opportunity to call a touchdown against those the likes of Auburn. We hope Gold has a speedy recovery — and whether or not you follow Bama, we’re all waiting for the next time we get to hear him exclaim, “ROLL TIDE!”