Some of the most legendary professional athletes of all time at one point served in the military. From Arnold Palmer's Coast Guard days to a bevy of baseball players like Willie Mays, Jackie Robinson, Ted Williams, Roberto Clemente and Joe DiMaggio, many superstars have sacrificed parts of their careers to serve and protect the United States.

Pat Tillman put his NFL career with the Arizona Cardinals on hold to join the Army and serve overseas. Longtime Alabama head coach Bear Bryant once turned down a head coaching job to join the Navy following the Pearl Harbor attacks. For guys like Tillman and Bryant, some things are more important than tossing the pigskin on a football field.

Glen Coffee, former Alabama running back from 2005-08, deserves respect for doing the same. 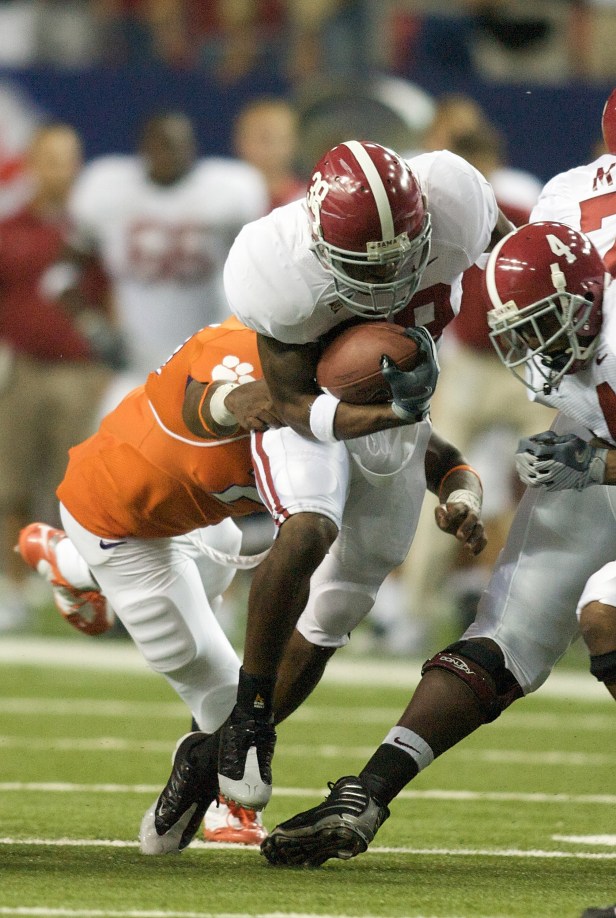 The running back saw little action as a freshman in 2005 and redshirted in 2006. When Nick Saban arrived in 2007, Coffee began to show the SEC and NCAA what he could do.

Coffee built on his 545 rushing yards in '07 with nearly 1,400 rushing yards and 10 touchdowns in 2008. The Associated Press All-SEC First-Team halfback declared for the 2009 NFL Draft and was taken in the third round by the San Francisco 49ers.

2008: Glen Coffee explodes? for career-long 87 yard TD against Arkansas. The junior finished the game with 162 yards and two scores? in 49-14 rout of Razorbacks.#RollTide ?? pic.twitter.com/JdaBpRqQGn

Primarily Frank Gore's backup, Coffee rushed for 226 yards and one touchdown across 14 games his rookie season in 2009. His promising NFL career, even if it was as a backup, was just getting started.

Why Glenn Coffee Chose The Army

Suddenly in 2010, just before the start of the NFL preseason, Coffee announced his retirement from the game. He fell out of love with football and said God wanted him to take a different path. As he put it, there was more to life than the pursuit of money.

"As far as the NFL goes, I have a hard time putting it like this because it sounds kind of harsh, but I feel like it ruins a lot of lives more than anything else. And that goes for people who have short careers in the NFL and long careers in the NFL," Coffee told the Sacramento Bee in 2011. "Because what happens is they see that as success. And money throughout your life has nothing to with your salvation in Christ. A lot of players get that money. And they chase that money, man, and I feel that they're really missing the true meaning of life. So I'm constantly afraid for the NFL and the players because kids growing up nowadays, they see that as the end all, be all. And that's just not the case."

Immediately after retiring, he went home to the Florida panhandle. He spent time with his young daughter, but he had no idea what he wanted to do for a career. But the military made sense for a man as strong and able both mentally and physically as he.

So Coffee decided he'd take his 6-foot-1, 200-pound frame and put it to use in U.S. Army Ranger School. He graduated from the Army's Airborne School in Fort Benning, Georgia, in 2013. Coffee trained as an army paratrooper and was assigned to the 6th Ranger Training Battalion.

In a Washington Post story, he said he chose the military for a "wow factor" similar to playing in the NFL. He also said he wanted to serve his country.

However, after taking such a long break from football, no team picked him up.

Glen Coffee returned to the University of Alabama in Tuscaloosa, the place he first garnered a reputation. He went back to finish his degree in 2017 and took a position as a student assistant with the running backs for Saban's football team.

"As a 31-year old being around them, it's kind of like, I'm trying to tell them that they're young without telling them that they're young," Coffee told the Montgomery Advertiser. "I'm a guy who's been there, seen that and done that. I can kind of steer them in the right path so you don't make the same mistakes I made."

One of those mistakes: leaving school a year early. Coffee stressed he wishes he would've stayed an extra year to have more time with friends and finish up his degree. Saban also won his first national championship at Alabama in 2009.

Coffee isn't sure what his future holds. It could be coaching, but he definitely wants it to include his daughter, who still lives in Florida. As for his athletic pursuits, he's chosen a new sport to keep him in great shape: boxing.

"When I quit the league, when I quit the NFL, I wanted something that would kind of force me to stay in shape," Coffee told the Advertiser. "I love working out, but sometimes it gets boring. So, I walked in to a boxing gym just for cardio purposes, and I fell in love with the sport as a whole."

Coffee's story is an inspiring one. When NFL players find themselves in dark places -- whether that includes drugs, alcohol or trouble with the law -- many think playing football is the only way to combat that. But Coffee following his own dreams and ambitions should serve as a reminder that we can and should do whatever we want with the short time we have on this planet.

This article was originally published October 22, 2019.