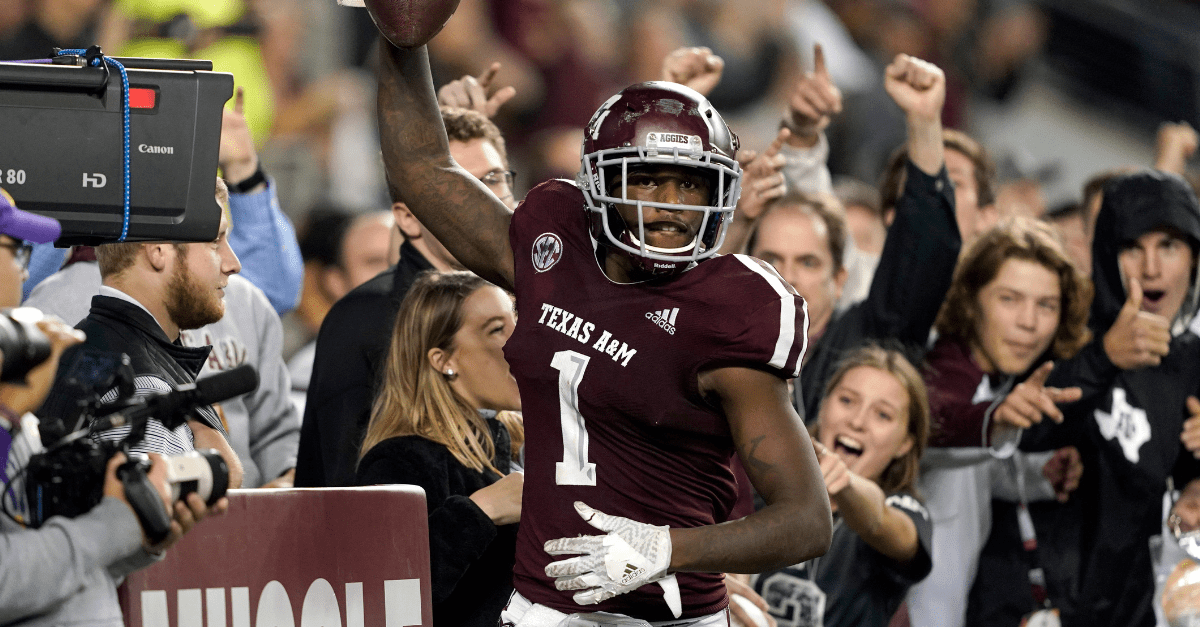 COLLEGE STATION, Texas (AP) ? With Texas A&M’s game with No. 8 LSU tied at 72-72 in the seventh overtime on Saturday night and the Aggies set to attempt a 2-point conversion, receiver Kendrick Rogers was frantically being tended to on the sideline for severe cramps in his calves.

Rogers was able to get himself together just in time to get back in the game and grab Kellen Mond‘s 2-point conversion pass that gave A&M at 74-72 victory in a game that tied the NCAA record for most overtimes in an FBS game.

“These are moments you live for, so no matter what’s going on with your body you want to be out there,” Rogers said. “So, you just have to talk yourself out of it, just mentally fight through it.”

Mond connected with Quartney Davis on a 17-yard throw to tie it at 72. Greedy Williams was called for pass interference on the first 2-point conversion try, giving the Aggies (8-4, 5-3, No. 22 CFP), another shot. After a false start by Texas A&M, Mond found Rogers for the conversion to end it.

Throngs of fans rushed the field to celebrate after the grab by Rogers.

“We showed as a team that we’re never going to quit, and we did that for four quarters and way more,” Mond said.

“You had two teams out there refusing to lose and we just made one more play,” Texas A&M coach Jimbo Fisher said.

The 74 points LSU allowed are the most ever given up by a ranked team, eclipsing the 73 No. 24 Fresno State gave up to Northern Illinois on Oct. 6, 1990, and the first seven overtime game involving a ranked team.

The 146 combined points are the most in an FBS game in NCAA history and the second-most in college football history behind the 161 points Abilene Christian and West Texas A&M scored in Abilene Christian’s 93-68 win in 2008.

“I lost track of overtimes … it is the craziest game ever,” Fisher said looking a bit dazed.

Mond threw for 287 yards and six touchdowns, three 2-point conversions and ran for one more TD as Texas A&M snapped a seven-game skid against LSU and got its first win over the Tigers since 1995.

LSU coach Ed Orgeron’s clothes might have already dried by the time this one ended after he was prematurely doused with Gatorade after the Tigers appeared to have a clinching interception in the fourth quarter. But the play was reviewed and it was ruled that Mond’s knee was down before the throw, keeping the Aggies alive and setting up the wild finish.

“The momentum kept on changing both ways and the guys responded,” Orgeron said. “That was one heck of an overtime, we just fell one play short. Our guys have nothing to be ashamed about, they fought, they fought hard.”

Burrow threw for three touchdowns and ran for three more as the Tigers were denied their first 10-win regular season since 2012 and likely knocked out of contention for a New Year’s Day bowl game.

Clyde Edwards-Helaire took a pitch from Burrow and launched an 11-yard TD pass to Tory Carter to put the Tigers on top in the fifth overtime, but the 2-point conversion failed. Mond answered with a 6-yard throw to Rogers, but A&M’s 2-point try failed, too to send it to the sixth OT.

Mond found Davis on a 19-yard touchdown pass on the last play of regulation to send it to OT. Orgeron felt like the clock ran out before Mond spiked the ball to stop the clock with 1 second to allow for that play.

“I just feel bad for those young men,” Orgeron said. “That second shouldn’t have been put on the clock, and I’m sticking to that.”

LSU head coach Ed Orgeron VISIBLY upset after the game…I counted 7 times that he referred to the 'one second put back on the clock' at the end of regulation#LSU #TexasAM #SEC pic.twitter.com/jXpVP9mny4

Both teams kicked field goals in the fourth overtime to send it to the fifth.

Both teams settled for field goals in the first overtime. Mond had a 3-yard touchdown run in double overtime and LSU sent it to triple OT when Nick Brossette followed with a 3-yard run, too.