Bryan Harsin is a lame duck less than two years after being hired as Auburn's head football coach. It's a bizarre feat for someone a third of a way through his second season, but Harsin has spurred frustration at all levels of the Auburn football program.

Big-time Auburn boosters weren't exactly thrilled when athletic director Allen Greene hired Harsin away from Boise State in December 2020. And when his first Tigers team stumbled to 6-7 record that included a heartbreaking loss to Alabama in the Iron Bowl, thin patience grew thinner. Then the tumultuous offseason filled with assistant coach turnover, players defecting to the transfer portal and a former recruit saying he treats players "like dogs" raised questions about how Harsin runs his program. To top it off, Greene stepped down the week before this season kicked off.

Harsin's leash was nearly nonexistent heading into the 2022 campaign -- there was even a movement to fire him after the offseason stories broke -- and when the guy who hired you is no longer around, the writing is on the wall. However, Auburn's win over Missouri means Harsin will get to wear the headset at least one more week. The win can be described the same way his tenure can: bizarre. 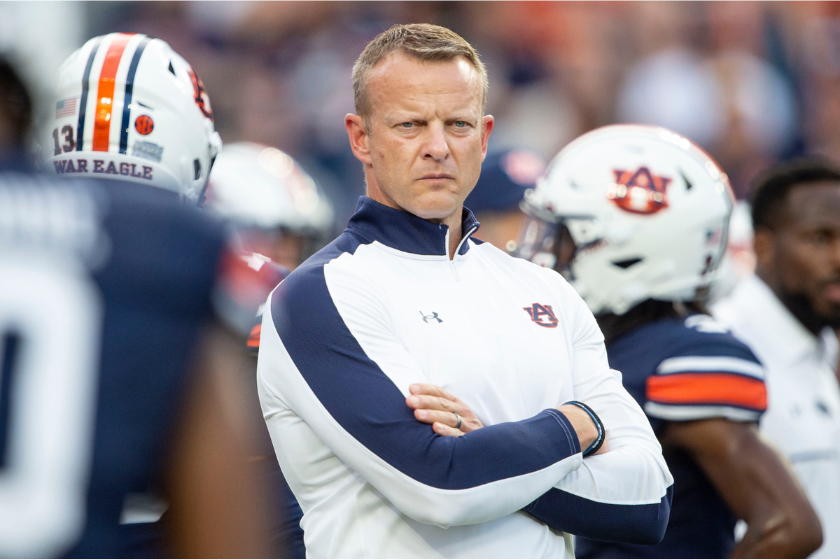 All Missouri kicker Harrison Mevis had to do was make a 26-yard field goal for the win. Tied at 14 with three seconds remaining in the game, it was an easy look. By some miracle though, Mevis pushed it right. Yes, the 2021 First-Team All-SEC kicker missed a gimme, and the game went to overtime. Bizarre moment No. 1.

Auburn kicked a field goal to go up 17-14 on their first overtime possession, but Missouri could win it with a touchdown. It appeared they were on their way as running back Nathaniel Peat broke loose on second down. As he was inches away from the goal line, however, he extended the ball with one arm and lost his handle. It rolled into the end zone, where Auburn defensive end Derick Hall jumped on it for a touchback. Bizarre moment No. 2, but an Auburn win nonetheless.

Auburn wins on a Missouri fumble into the end zone in OT? Only Auburn can achieve this type of chaos week in & week out pic.twitter.com/SypkNTDISq

I've seen my fair share of unfathomable losses, but the way Missouri let this one go is almost too good to be true. With all the noise surrounding Harsin's job status, I'm convinced Mizzou brokered a deal with Alabama just to make Auburn fans suffer a little longer -- the ultimate 4D chess move. How does an all-conference kicker miss a straightaway chip shot? What are the chances of Peat fumbling on his own? It's never bad to win, but it only delays the inevitable. Harsin is going to get fired. It's only a matter of when.

He would have assuredly got the boot had Missouri prevailed, but with eight games remaining, any slip up will be enough to push him out the door. It goes to show how bad it is when Auburn is willing to front a $15 million buyout to let go of a guy who's only coached 17 games. I can't think of another coach plummeting this quickly.

Firing a coach in the middle of a season isn't ideal, but sometimes it's better to just wash your hands and move on. Auburn is champing at the bit to end the Bryan Harsin era. They'll have to wait at least one more week.

MORE: Why Do Auburn Fans Say "War Eagle"? The Origins of the Famous SEC Battle Cry