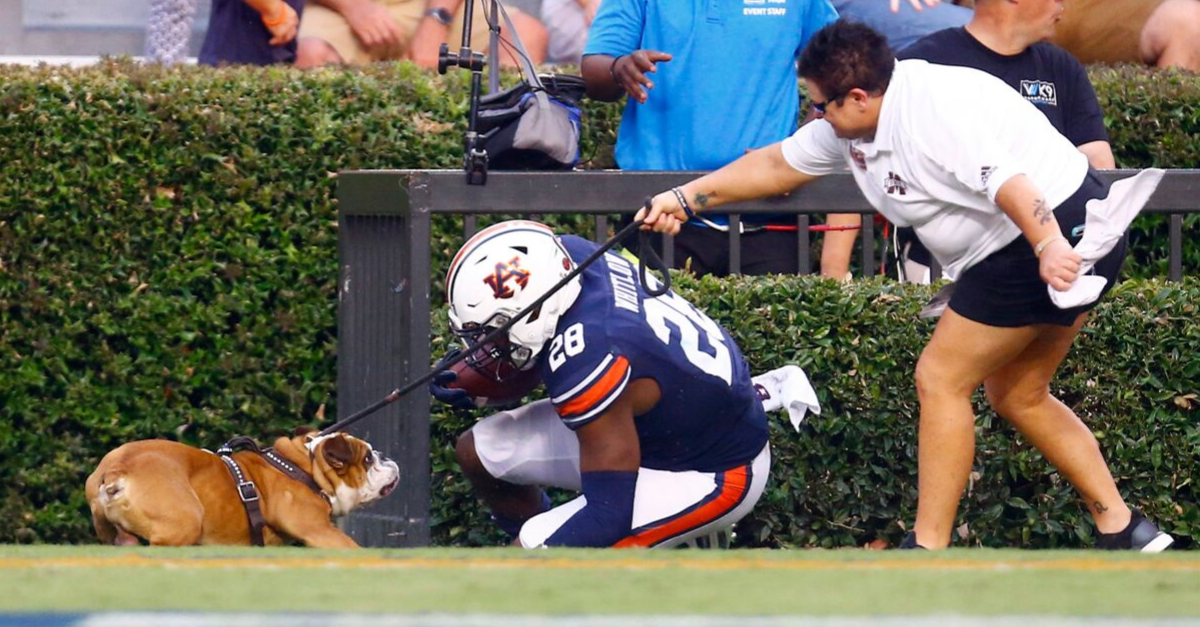 If you follow SEC football, you know all about Auburn Tigers running back JaTarvious Whitlow. At 6-foot, 210-pounds, the sophomore is big and fast and has the ability to run over defenders. To see him score a touchdown against the Mississippi State Bulldogs during Saturday?s game wasn?t exactly surprising, but what happened on the sidelines after the play certainly scared a few people, including PETA.

Whitlow raced to the outside and made it to the pylon before he could get knocked out of bounds in the first quarter, but the tackle knocked him off his feet and sliding straight into Bully, the Mississippi State mascot, on the sidelines of Jordan-Hare Stadium.

Mississippi State?s Bully, on his leash and being held by a trainer, landed on his feet and stared down Boobee Whitlow as he popped up.

RELATED: Remember When a Georgia Football Player Trucked This Reporter, Then Asked Her on a Date?

Hey Bulldog Nation. Just want everyone to know I am fine!! I’m headed back out on the field now. Thanks for all the tweets and concerns. We love our fans!!! @SECNetwork @espn

ESPN reporter Holly Rowe said Bully was removed from the field after the first touchdown of the game Saturday night, but he returned.

📢 PUPdate: Jak is okay! He will spend the football bye week making a full recovery from bruising to his chin and right hind leg during the MSU vs. Auburn game this past weekend. He’ll be ready to return to all his mascot duties on Oct. 13. pic.twitter.com/49QLA02Zkk

“PUPdate: Jak is okay! He will spend the football bye week making a full recovery from bruising on his chin and right hind leg during the MSU vs. Auburn game this past weekend. He’ll be ready to return to all his mascot duties on Oct. 13.”

This certainly isn?t the first time involving a live mascot and football player at a NCAA college football game, but to see the Auburn player actually make contact with the Mississippi State University mascot near the end zone was scary and could have been problematic.

To the People for the Ethical Treatment of Animals (PETA), even the slightest of injury to Bully the Bulldog was too much.

"It was sheer luck that this close call didn't leave Jak severely injured or even dead."

They seem to be underestimating the toughness of Jak.

It seems that with any incident involving a live animal injury, PETA is right there. This is no different. Once the organization saw the video, they quickly urged Mississippi State to retire its beloved live mascot.

?It was sheer luck that this close call didn?t leave Jak severely injured or even dead, and it?s never been fair game to subject a dog to the bright lights, screaming fans, and booming noise of a football stadium,? PETA Senior Director Marta Holmberg said in a press release. ?PETA is urging MSU to be a dog?s best friend and end its live-mascot program?and we?ll gladly help find Jak a loving adoptive home where he can live out the rest of his days in peace.?

I?m writing on behalf of People for the Ethical Treatment of Animals (PETA), the world?s largest animal rights organization, with more than 6.5 million members and supporters worldwide. Concerned citizens are contacting us about an incident in which a football player apparently collided with Jak, Mississippi State?s live bulldog mascot, during the September 28 game against Auburn University.

In light of this close call?which could easily have left Jak severely injured or even dead?as well as the cruelty inherent in using living beings as ?mascots,? I urge you to retire Jak and pledge not to use live animals in the future.

Using vulnerable animals as mascots is a recipe for disaster. For example, at this year?s Sugar Bowl, Bevo, the longhorn steer used by the University of Texas, apparently broke out of an enclosure and charged the University of Georgia?s bulldog mascot, Uga, nearly trampling him.

Even if animals survive their stints as mascots without losing a limb or their life, it?s hard to imagine that they enjoy appearing before raucous crowds. Being forced into a stadium full of bright lights, screaming fans, and loud noises can be stressful?and even terrifying?for sensitive animals like dogs, who would much rather be at home with loving guardians.

Bulldogs like Jak are also predisposed to many congenital ailments as a result of inbreeding and being bred for distorted physical features, including severe breathing difficulties, hip dysplasia, and heart disorders. Poor ventilation and hot or humid weather can be deadly for bulldogs, and traveling is especially taxing on them. What?s more, breeding dogs to use as mascots?or for any reason?is unconscionable, given our country?s staggering canine overpopulation crisis.

Public opinion has turned against using animals for ?entertainment,? and most universities and professional sports teams have switched to using costumed human mascots instead of real animals. Unlike animals, human mascots can lead cheers, interact with the crowd, and pump up the team?all willingly.

May we please have your assurance that you will bring Mississippi State into the 21st century by giving Jak the retirement he deserves and pledging not to use real animals as mascots? Thank you for your attention to this important issue.

No matter how ridiculous this might seem, PETA is dead serious. All we can do now is sit back and wait until Bully comes back, and for the organization’s next letter asking to end tradition and retire a live mascot.