The pulse of the offense starts in the trenches. It's the offensive line's duty to protect the quarterback, make holes for running backs so the announcer can give the obligatory "That hole was so big even I could've run through it" and eat everything in sight.

This year, for the Auburn Tigers, the man tasked with protecting either Zach Calzada or T.J. Finley's blindside is Kilian Zierer. The 6-foot-7, 312-pound offensive tackle hails from Munich, Germany, a place where a different kind of football is king. However, since he began playing American football in 2016, Zierer has steadily improved and is set to be Auburn's anchor up front. 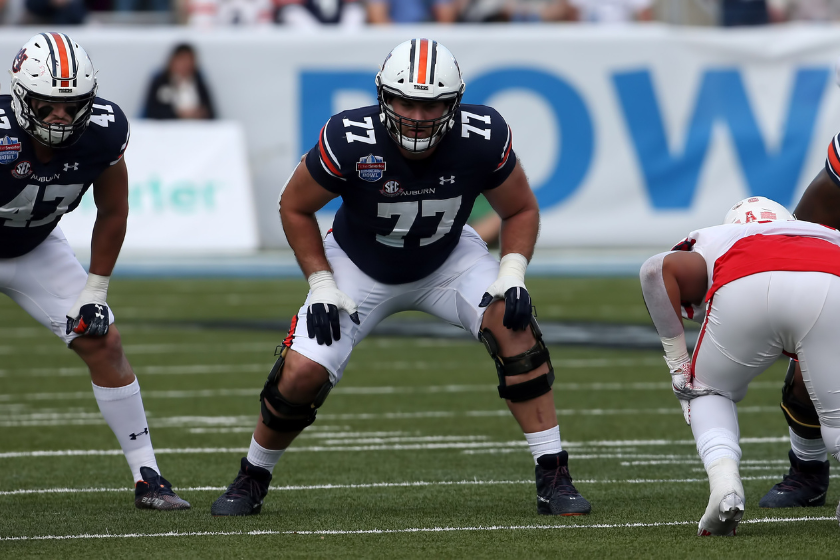 RELATED: Auburn's Redemption Tour Begins With These 5 Players in 2022

Like many of his German friends, Zierer played soccer long before he picked up a pigskin at the age of 16. But, to him, the gridiron was a place of leisure.

"It wasn't anything serious; it was really just for fun at that time," he said, per auburntigers.com. "It was something different and a lot of the terms used in football were still the English terms, which helped me later on."

Then Zierer grew and grew and grew to the point where he started getting recognition from junior colleges in the United States. He ended up at the College of the Canyons in Santa Clarita, California, where he blossomed into the No. 1 ranked JUCO offensive tackle in the country. He had his pick of the litter when it came to major college football programs, but he committed to Auburn ahead of the likes of Florida, Florida State, Oregon, TCU, Cal, USC, Utah, UCLA and Arizona State.

A torn ACL during Zierer's last JUCO season sidelined him for Auburn's 2020 campaign, but he made his debut in 2021, logging starts against Arkansas, South Carolina, Alabama and Houston. Now, Zierer is healthy and set to lead Auburn's offensive line as the No. 1 left tackle on the depth chart. Position coach Will Friend agrees.

"He's understanding the technique of playing the position," Friend said in April, per AL.com. "...He understands me better now, and he's gotten better and better."

"He's our best pass protector," Friend continued. "He's got the length. He's got the athletic ability."

So, seeing as Zierer has only seen limited action in The Plains so far, what is it that has coaches excited? Well, for one, Zierer is massive -- always a good sign for an offensive lineman -- but his athletic ability, like Friend said, is what sets him apart. According to The Draft Network, Zierer generates good pop out of his stance, uses his reach to keep his opponents at bay and is a reliable puller. Most importantly, he didn't allow a sack in the 339 snaps he played last season. All that being said, he could shoot his way into the first round of the NFL Draft with a solid year.

First, he's going to concentrate on helping Auburn improve upon its 6-7 record in Bryan Harsin's first season as head coach. He plans on inspiring a lot of "War Eagle" chants throughout Jordan-Hare Stadium, but to him,"War Eagle" is more than a battle cry.

"In German, you would say 'Kriegsadler', but 'War Eagle' is much more than just an expression," he said. "When you hear 'War Eagle', you know how much people love Auburn and their excitement for it. And I love Auburn, too."

How about we get a "Kriegsadler" when Zierer gets his first pancake of the year?