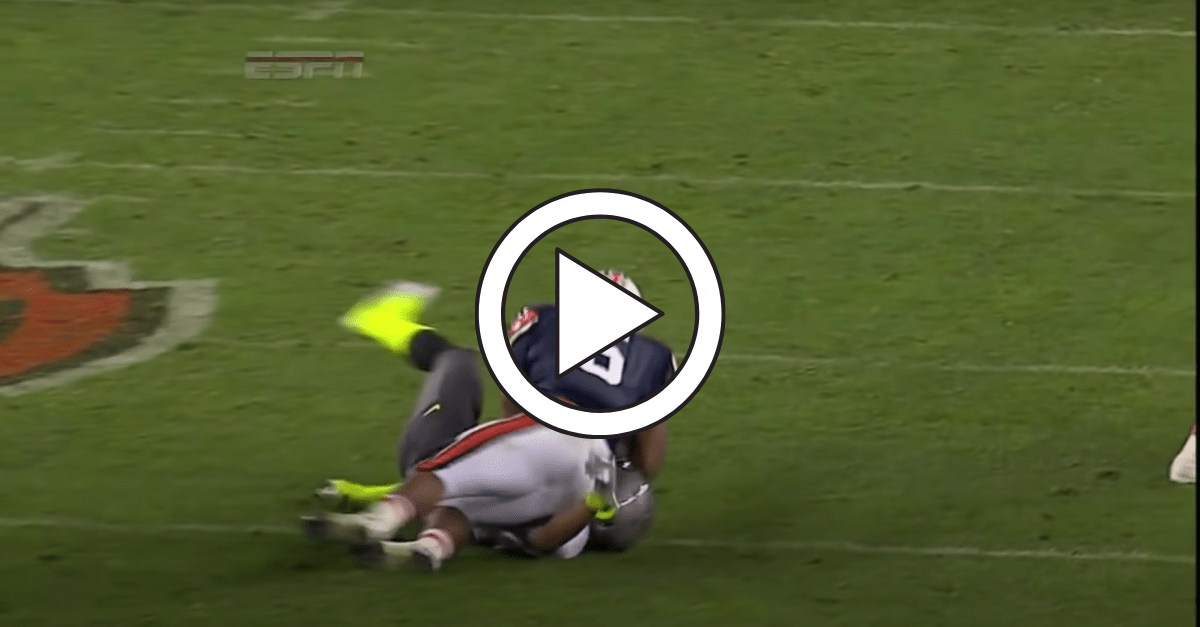 For the Auburn Tigers, the 2010 college football season was magical and historic. From quarterback Cam Newton winning the Heisman Trophy to head coach Gene Chizik winning the 2011 BCS National Championship Game, that year on The Plains will be talked about for generations to come. Perhaps it wouldn’t be as special had it not been for running back Michael Dyer.

Dyer was just a true freshman that year, but man, he burst onto the scene in a big-time way. The 5-foot-9 running back rushed for 1,093 yards on 182 carries with five touchdowns en route to become a Freshman All-American. He was truly a star in the making, and nothing proved that more than the national title game against the Oregon Ducks.

If breaking Bo Jackson’s freshman record wasn’t enough, Dyer ran for 143 yards on 22 carries during the BCS Championship Game. He was also responsible for the biggest and most controversial play of the entire night in Arizona.

Was Auburn’s Michael Dyer Down?

With the game tied 19-19 and just over two minutes to play, Auburn was looking to piece together a drive that would seal the game. And when Cam Newton took the snap and handed the ball off to Michael Dyer, it looked like the Tigers got some decent yardage on first down.

At first, it appeared Dyer was taken down by Oregon defensive back Eddie Pleasant after a nice gain. However, and despite players standing around, the whistle never blew. So Dyer took off running down the sideline before the being tackled.

The result of the play was a 37-yard run. Oregon, which had just tied the game on a touchdown and two-point conversion moments earlier, was in disbelief. Heck, everyone was. But the play stood and it put Auburn in field goal range.

The rest is history. Auburn kicker Wes Byrum nailed a 19-yard field goal as time expired to give the Tigers the 22-19 national championship victory. Dyer was named the game’s Most Valuable Player for his monster performance.

Dyer was down, though. That’s what Duck fans said then and still believe to this day. Whether it was his ankle or wrist, many people still contest something other than his hand or foot was touching the turf. After all, just because Dyer rolled over the Oregon defender doesn’t mean he wasn’t still down, right?

That might have been true, but the ruling on the field stood.

“A few weeks after the game, the Big Ten referees eventually told us that knew they made the wrong call on the field,” then-SEC commissioner Mike Slive said, via Yahoo Sports. “I felt like now was the time to reveal this information to both the Auburn and Oregon fan bases.”

The Auburn Tigers were NCAA champions that season. There’s nothing anyone can say to dispute that. They went through the regular season undefeated and took down ranked teams such as South Carolina, Arkansas, LSU, and Alabama in the process.

The Tigers belonged in the CFB title game, and they seized the moment over Oregon and head coach Chip Kelly. Debating that run will never get old, though.

This article was originally published June 5, 2020.