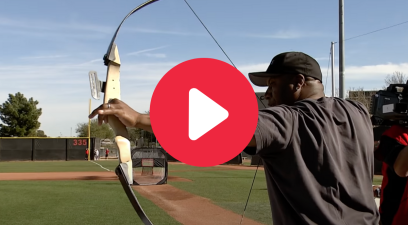 “Bow” Jackson Used to Shoot Apples Out of His Teammates’ Hands The Auburn Tigers were in some trouble in the opening game of the 2000 college football season.

The Tigers built a 28-7 lead against the Wyoming Cowboys heading into the fourth quarter. Wyoming responded with 14 unanswered points, making it a one possession game.

Auburn needed a big play. They turned to star running back Rudi Johnson. Johnson took the game into his hands and helped christen the first appearance of a sacred Auburn football tradition.

Wyoming scored on a touchdown pass to bring the game within seven with under four minutes remaining in the fourth quarter.

But not for long.

The Auburn offense started the drive at their own 30-yard line. An incomplete pass on first down caused the team to revert to the basics: running the dang ball.

Auburn quarterback Ben Leard handed the ball to Johnson on a draw. He shook a linebacker at the line of scrimmage and made another defender miss near the first-down marker.

This is when it gets absurd.

Johnson scurries past midfield and breaks the tackle of two more Cowboy defenders. He’s hurdling towards the end zone when yet another Cowboy defender grabs his jersey and tries to punch the ball free.

Johnson slows down but keeps his legs going. He crosses the goal line with three Wyoming players on his back.

The touchdown run put the upset bid away for good. It also capped a career day for Johnson, who finished with 174 rushing yards and three touchdowns.

Other than Johnson’s incredible run, the Wyoming game holds additional significance. It was the first game to ever feature the “Eagle Flight“, one of the most beloved traditions at Auburn University. Tiger AKA War Eagle VI was the first eagle to fly free at Jordan-Hare Stadium.

Thank goodness Johnson was able to secure the win. Otherwise, the Eagle Flight might’ve been labeled as bad luck.