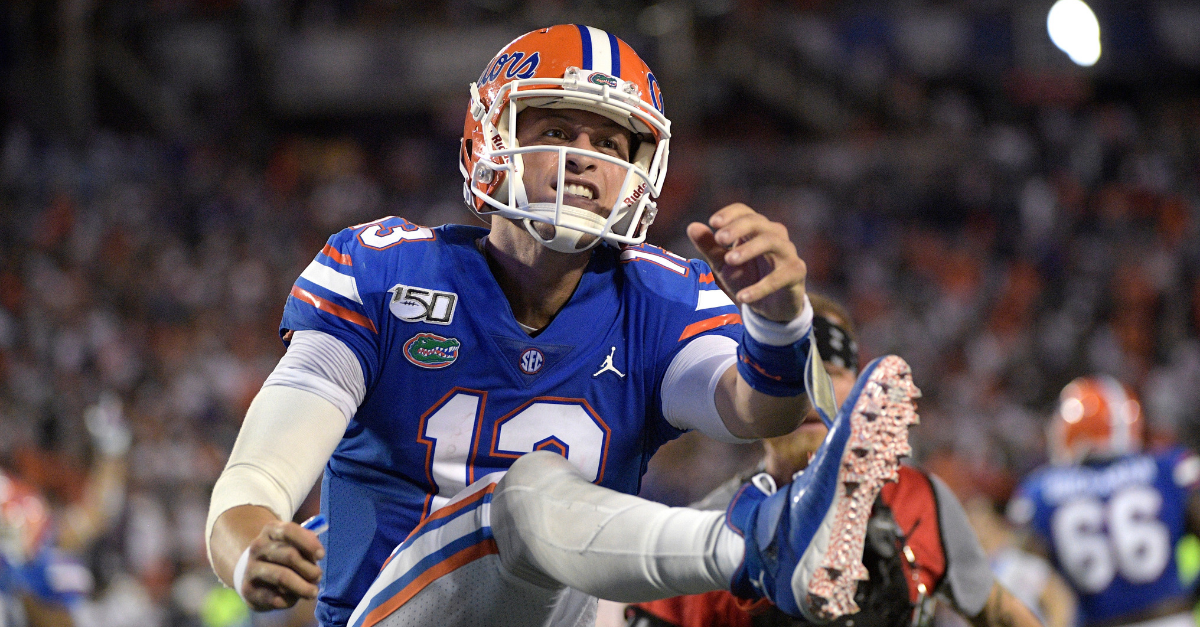 Damn, do I love my mom. If she’s reading this (hi, mom!), then she’ll probably start sobbing and call me immediately to remind me how much she loves me because, well, this is what moms are supposed to do. They also fervently and whole-heartedly defend their children from any and all foes, both in-person and online. You can count Florida quarterback Feleipe Franks‘ mother, Ginger Franks, among this group of top-tier moms.

Despite the Florida Gators and head coach Dan Mullen defeating the Miami Hurricanes in their season-opener, college football pundits were critical of the Gators, and namely, Feleipe Franks’ play during the game.

Franks accounted for three turnovers; there was a fumbled RPO exchange and two interceptions, one that bounced off Freddie Swain’s hands and another Franks admitted was meant as a throw away. Despite those miscues, Florida’s redshirt junior QB accounted for 262 yards of total offense and three touchdowns, including the game-winning 3-yard run in the fourth quarter.

Still, many criticized Franks’ play and antics after the game when he punted a football into the stands in celebration. As you’d expect by any great mom, Ginger Franks defended her son with a tweet.

“Imagine a world where we encouraged one another. Where we didn’t judge a person by a few seconds we see of them. Where we took the time to talk to people to learn their story. To find out about their day or offer a helping hand or words of encouragement when they are down. Instead we criticize and say cruel things to people we don’t even know via social media, direct messages or media. Would you say those same things in person after having a conversation to find out the other person’s perspective? Probably not and that is what is so sad.”

In a 2015 interview with USA Today, Franks, who starred at Wakulla High School and was committed to LSU at the time, praised his mother and father — a Master Sargeant in the U.S. Army — for his upbringing.

“Seeing my Dad do hard work, going through his PT tests, my brother and I watching that has pushed us,” Franks said. “Seeing how hard my Mom works, that drives me.”

Despite Ginger Franks’ heartfelt plea for everyone to see the good in the world, the sad truth is that no one is free from criticism. That’s especially true of a starting quarterback in the SEC whose been benched five times in the last two years.

Franks isn’t phased, though, saying after that game, “I don’t need anybody’s approval. I’m myself. I’m my own person. At the end of the day, that’s what makes me who I am.”

Franks retweeted several responses to his critics online, highlighting the Gator Nation family and its commitment to his personality.

Trevon Grimes on the criticism Feleipe Franks took over the weekend for his celebrations: pic.twitter.com/3fhss0oPRz

The eighth-ranked University of Florida football team can rest back home in Gainesville before UT-Martin visits Ben Hill Griffin Stadium on September 7. Franks and company will certainly address early season miscues and be sharper than they were in Orlando.

And if Ginger Franks has anything to say about, criticism of her son isn’t going to go unnoticed the rest of the year.