How Florida Stole Feleipe Franks from LSU at the Last Second 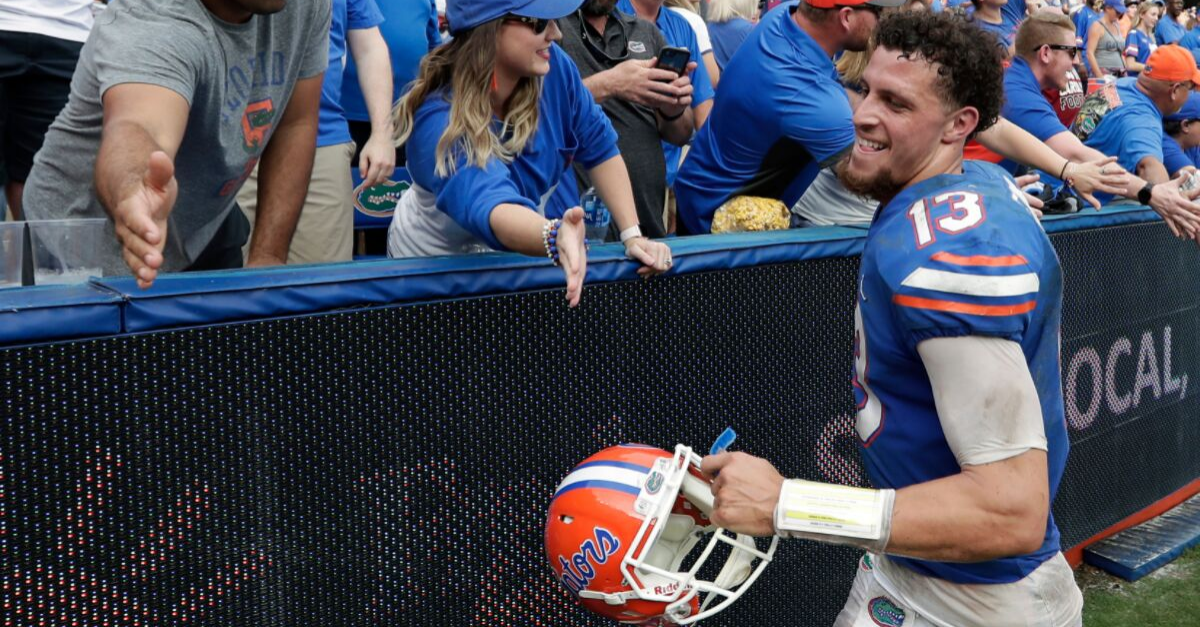 The Florida Gators and LSU Tigers are two of the fiercest rivals in the NCAA. Unsurprisingly, there’s been no shortage of storylines when these two Southeastern Conference teams meet every year.

The 2016 Hurricane Matthew/goal-line stand game produced a bevy of content, including some amazing postgame shade-throwing from UF coach Jim McElwain and a pre-game scuffle between rival defensive backs who likely both proclaimed their school was “DBU.”

Even current Florida quarterback Feleipe Franks once put the SEC West school in a bind when he flipped his commitment from the Tigers to UF at the last second back in 2015.

In hindsight, the move probably didn’t make much of a difference. It left LSU without a top-flight quarterback recruit in their 2016 class, which ranked No. 2 nationally by 247Sports and included some impressive players like linebacker Devin White and cornerback Greedy Williams.

So just how did the Gators flip a guy who had been committed to playing in Death Valley for a year and a half?

It's great to be a Florida Gator! #Committed 🐊

LSU commit ⭐️⭐️⭐️⭐️ QB Feleipe Franks is in the Swamp to watch Gators. He says he'll be back next week for UF-FSU pic.twitter.com/bISbUpRRj1

How Florida Flipped Franks From LSU

Just ask Les Miles, the coach who let Franks slip through his fingers. He told The Advocate it was all thanks to some “negative recruiting” from McElwain.

?Somebody calls you and says, ?Listen, I just got the head coaching job at Florida. I want you to come be my quarterback, and I?m not going to be fired,?? Miles said. ??That Miles guy, he?s going to be fired. Handwriting is on the wall.??

Miles added that LSU AD Joe Alleva?s comments to the media weren?t helping Miles and the Tigers convince Franks to stay, either:

?They could paint a stable position, and I really ? as soon as they got rid of Muschamp and went with McElwain, there was an offensive guy,? Miles said. ?(The Franks family) felt like it was going to be different, and there was always a dark cloud hanging over my head as long as (athletic director) Joe Alleva was going to talk to the press.?

See, Franks backed off his pledge to LSU during a hectic time for the Tigers.

LSU was fresh off a 38-17 loss to Ole Miss, their third straight loss during the 2015 season. The fan base was growing tired and Miles was on his way out, though he wasn’t fired until midway through the next season.

McElwain, meanwhile, just went 10-4 in his first season with the Gators. He was in desperate need of a new signal caller to head his offense following the Will Grier fiasco.

Florida was attractive to Franks and vice versa for many reasons. The 6-foot-6 athlete was the fifth-ranked pro-style quarterback recruit in the nation that year and was looking to start as soon as possible. Gainesville made perfect sense.

McElwain was billed as an offensive guru who knew how to develop quarterbacks from his coaching days at Alabama, Fresno State and Colorado State. Plus, LSU still had the inconsistent Brandon Harris under center.

Franks was pretty much guaranteed to start within a yea, if not day one, at UF.

Miles didn’t just let the only quarterback in his class walk away. But his last-ditch effort visit to Franks’ house in Crawfordville, Florida, came up short.

“I recruited the living hell out of him,” Miles said.

Securing Franks was monumental for McElwain and the Gators at the time. Florida had just lost embarrassingly to Florida State, 27-2, and maintained just one quarterback recruit in the class, two-star QB Kyle Trask. Just a year prior, they missed out on landing in-state quarterbacks Lamar Jackson (Louisville) and DeAndre Francois (FSU).

Franks even took down the Tigers in 2018, when Florida beat its rival 27-19 in The Swamp. He and the Gators suffered a loss in Baton Rouge in 2017.

He took home MVP honors in UF’s 2018 Peach Bowl thrashing of Michigan after throwing for 173 yards and a passing touchdown and rushing for another 74 yards and a score. The performance all but guaranteed he’d be QB1 throughout the offseason and preseason drills.

Of course, if the Gators quarterback’s college football career doesn’t lead to one in the NFL, he can pursue baseball as a backup plan the way Tim Tebow has with the New York Mets.

Despite not playing baseball since his junior year of high school at Wakulla High School, Franks threw 94 mph off a mound this year and signed with the Boston Red Sox for $40,000 after being selected in the 2019 MLB Draft, according to the Boston Globe. Coming out of high school in 2016, Perfect Game rated him the 500th best player in the country.

The Red Sox similarly did the same with another former quarterback of the Florida Gators when they signed Jeff Driskel to a contract in 2013.

For now, the redshirt junior starting quarterback has his sights set on leading the Gators past rivals like Miami and Georgia en route to a SEC Championship and possibly one of the New Year’s Six bowl games in Mullen’s second year at the helm of the program.

“We know we have potential. We know we have guys who can go make plays,” Franks told FloridaGators.com during SEC Media Days. “It’s more that we want to keep on the right mindset and not fall off from what we already built from last year.”