WATCH: Not Even This Gators DB Can Save Florida State From Embarrassing Itself 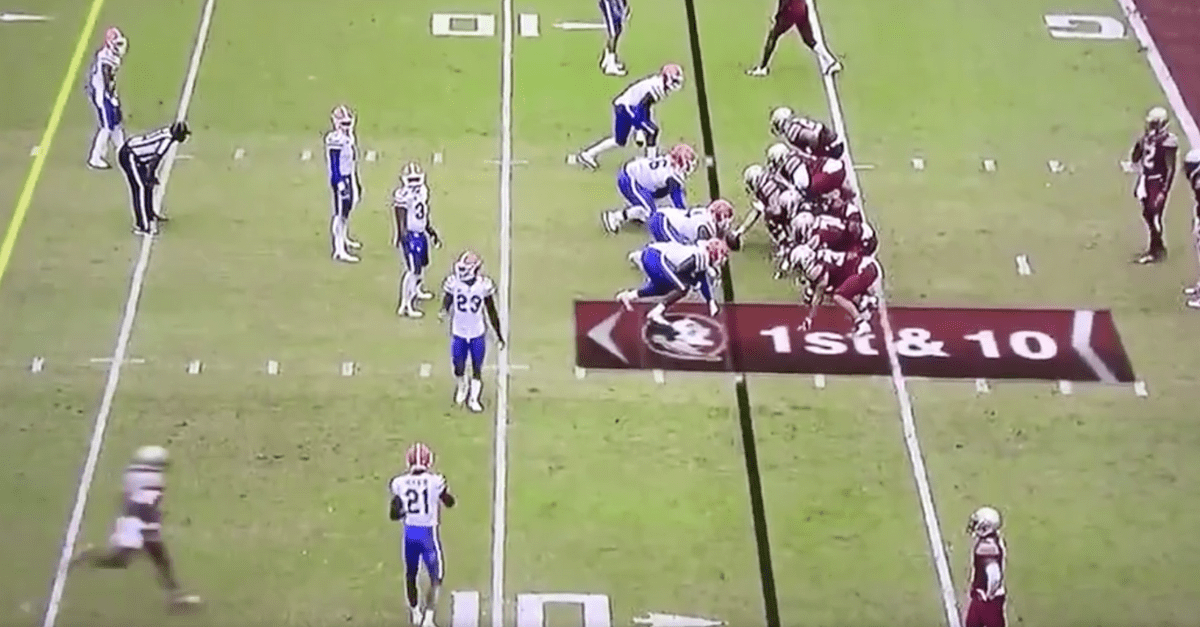 In the crazy world of college football, it?s not often you see a player helping the other team. Even rarer is helping your most-hated rival. Imagine Alabama quarterback Tua Tagovailoa telling the Auburn secondary one of his wide receivers is uncovered before the snap. That?d be a pretty odd visual, right?

That?s essentially what happened in Florida?s 41-14 win over Florida State at Doak Campbell Stadium in Tallahassee this past weekend. Quarterback Deandre Francois and the Seminoles offense began a fourth-quarter drive at their own seven-yard line. FSU only had 10 players on the field, though, which would?ve constituted a penalty had it not been for one Florida defensive back.

Chauncey Gardner-Johnson, who had his share of fun after the game, called out to Florida State?s sideline once he realized no one was lined up across from him. The receiver clearly made no difference, though.

I swear I’m not making this up: a Gators safety just yelled to the FSU sideline that it didn’t have 11 guys on the field. To which FSU promptly added a receiver. And threw an incompletion.

And you people thought I was kidding. #Gators #Noles. pic.twitter.com/bebS0oTZXH

Watching this live reminded me of the time two Florida lineman blocked each other in game against Georgia Southern in 2013. The clip went viral. Florida embarrassingly lost, 20-26, and finished that season 4-8.

Losing games because your offensive line is playing poorly or because your secondary is slow is one thing, but to not even be able to line up correctly 12 games into the season? This one?s got to fall on Taggart and his coaching staff.

Even if you?re down 34-14 with nine minutes left in the game like FSU was, this just can?t happen. Heck, that?s still plenty of time to make something happen and possibly get back in the game. Everyone remembers UF?s ?Choke at Doak,? right?

Regardless, what should?ve been a penalty turned into a near interception when Francois threw down the sideline into double coverage. The quarterback finished the game throwing for a paltry 154 yards on 14 of 29 pass attempts. UF?s defense picked him off twice and sacked him five times.

This embarrassing moment for the Seminoles was a small symbol of just how bad they were under first-year head coach Willie Taggart. The Gators not only ended FSU?s NCAA record 36-year bowl streak, they served their rival its first losing record (5-7) since Bobby Bowden?s first year as head coach in 1976.

As for Gardner-Johnson, he had no problem clowning Florida State players about the moment.

CGJ @CGJXXIII after the game on this moment—"I was just teasing them. I'm like, 'How y'all think y'all can come beat us, but y'all not prepared? You can't be prepared with 10 guys. You've got to be prepared with all 11 guys.'" https://t.co/K0GJ9bI7Wt