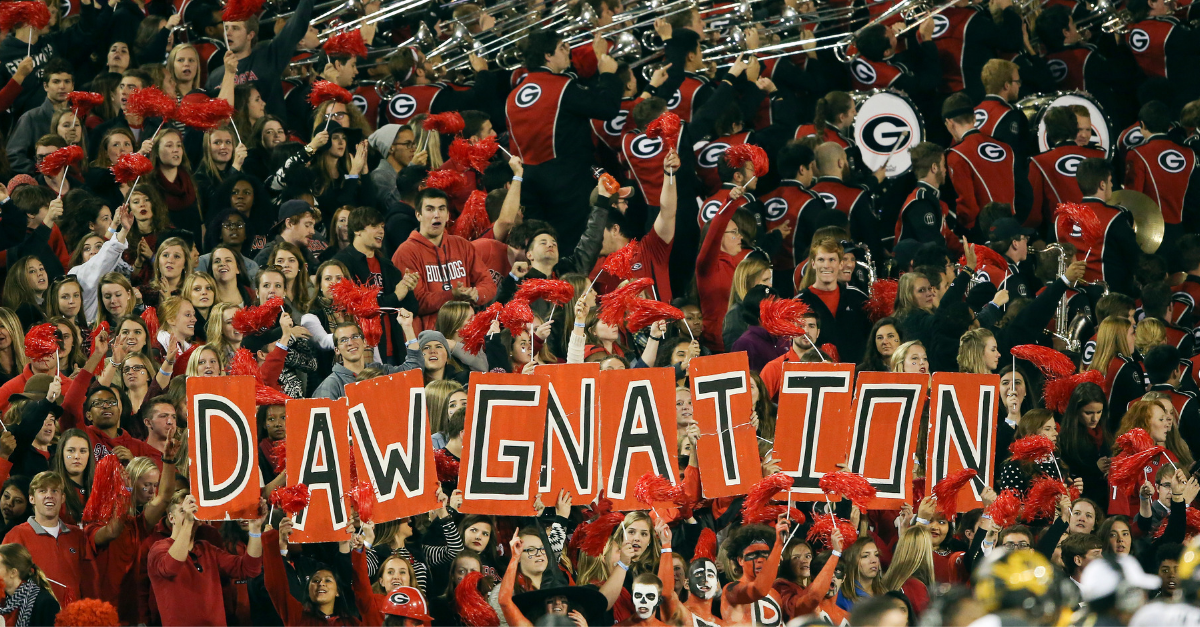 One of the hottest topics up for discussion at the SEC Spring Meetings in Destin, Florida is the potential expansion of alcohol sales during college football games. Currently, SEC schools can provide alcohol only in private areas of the conference’s 14 football stadiums, but some places along the Bible Belt still don’t even allow those exchanges to happen. With attendance declining, it’s thought that bringing booze to game day will keep fans in the stands all season long.

For the first time in 2019, Georgia football fans can purchase alcohol during Bulldogs games, but there’s a $25,000 catch attached to it.

Fans of the Georgia Bulldogs will now be able to purchase beer and wine in the “premium seating” area ? known as the 200 level ? during games. However, it’ll only be available to exclusive members of the Magill Society.

What in the hell is the Magill Society? Well, besides sounding like the UGA equivalent of the Illuminati, members of this philanthropic group donate cash to fund all Georgia athletics programs, but you can only get in if you have way too much money on your hands.

You only gain access to the Magill Society by donating at least $25,000 over a five-year span.

"Front and center" at #SEC meetings next week: Booze.

At the University of Georgia, there’s never been alcohol sold inside Sanford Stadium. Only in a few premium seating areas ? the private SkySuites and brand new East End Club ? is alcohol provided free of charge, but that’s only, once again, available for the elite UGA athletics donors in those club levels.

The general seating areas (where people like me who would actually buy $13 beers during football games sit) still don’t have access to libations during games under the current rules.

That could all change in the upcoming football season, though.

“The SEC has had a committee working on [creating general alcohol sales] for a while,” Georgia Athletic Director Greg McGarity told DawgNation. “There will be a report provided to the presidents and that committee will make recommendations. It will be up to the institutions to vote it up or down.”

According to a report from SI.com last week, there are currently 55 FBS football programs that serve alcohol throughout their stadiums. Places like Oregon and Oklahoma State joined that list last year, while Illinois, Rutgers, Oklahoma and Texas Tech will join the party this season, according to the report.

The added revenue paired with the renewed interest to maintain your buzz throughout the entire football game should, in theory, bring in more money by simply offering overpriced draft beer to the fans.

SEC is considering removing their ban on alcohol sales inside SEC Stadiums.

What is your opinion of selling alcohol inside SEC Stadiums?

“Why wouldn’t we do it?” Texas Longhorns Athletic Director Chris Del Conte said. “We’re asking our fans to come spend the day with us, and if they want to buy a beer, they can buy a beer. If you’re going to pretty much any event nowadays ? Disneyland, even ? you can buy a beer.”

I like the way you think, Chris. In time, fans across the Southeastern Conference from Alabama to Missouri and from South Carolina to Texas A&M are sure to agree with you, too.

College football creates the biggest parties of the week outside the stadiums. Schools would be smart to bring that party inside and start making some money after ridding themselves of an ancient precedent.