Academic scandals are nothing new to college sports. The University of North Carolina came under fire for a massive academic-athletic scandal that included 3,100 athletes over 18 years that the NCAA said broke no rules. More than 60 Florida State football players were accused of cheating in 2007 and FSU had to vacate all its wins from 2006 and 2007.

As we've seen from the responses to an NCAA commercial, the everyday life of a student athlete isn't what these scandals make it out to be. Classes require time and energy, and it's unfortunate when a scandal like the one at the University of Georgia undercuts these athletes' dedication and work ethic.

In the spring of 2003, Georgia Bulldogs men's basketball head coach Jim Harrick resigned from his position in light of an academic fraud scandal within his program. 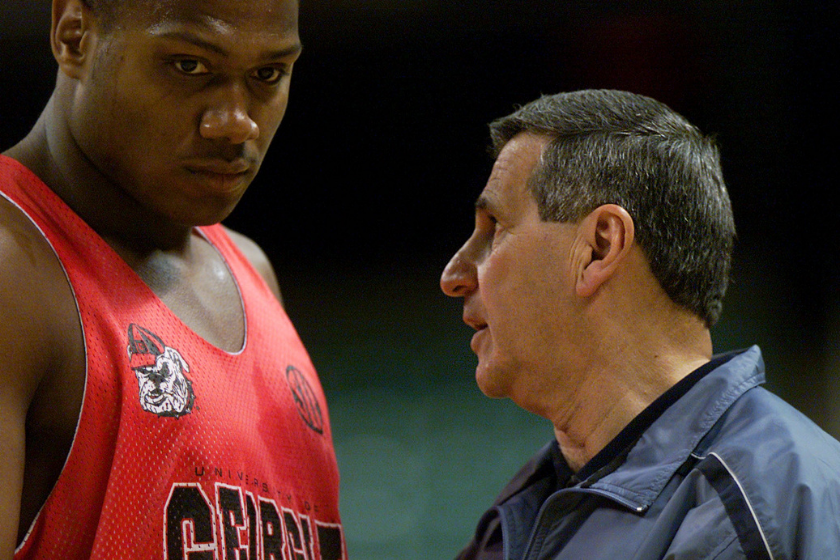 Harrick's son, Jim Harrick Jr., was an assistant with the team and had been teaching a basketball strategy class since 2001 that a few players on the team were enrolled in. Three players -- Rashad Wright, Chris Daniels and Tony Cole, who revealed this story to ESPN after he was dismissed from the team in 2002 -- received high grades and credit hours for the class even though they never attended it.

Georgia, which had a 19-8 record at the time, banned its team from competing in the Southeastern Conference tournament and NCAA Tournament that year because of the scandal.

Luckily for us, though, one of the many documents UGA sent the NCAA following the scandal included the class's ("Coaching Principles and Strategies of Basketball") 20-question final exam. Cole said he never even took it.

My favorite of them may be No. 20 because how can you get a question wrong that begins with "in your opinion"?

Let's see if you can pass it with flying colors.

1. How many goals are on a basketball court?

2. How many players are allowed to play at one time on any team in a regulation game?

3. In what league do the Georgia Bulldogs compete?

4. What is the name of the coliseum where the Georgia Bulldogs play?

5. How many halves are in a college basketball game?

6. How many quarters are in a high school basketball game?

7. How many points does one field goal account for in a Basketball Game?

8. How many points does a 3-point field goal account for in a Basketball Game?

9. How many officials referee a college basketball game?

10. How many teams are in the NCAA Men's Basketball National Championship Tournament?

11. What is the name of the exam which all high school seniors in the State of Georgia must pass?

b. How Do The Grits Taste Exam

12. What basic color are the uniforms the Georgia Bulldogs wear in home games?

13. What basic color are the uniforms the Georgia Bulldogs wear in away games?

14. How many minutes are played in a college basketball contest?

15. How many minutes are played in a high school basketball game?

18. How many fouls is a player allowed to have in one Basketball game before fouling out in that game?

19. If you go on to become a huge coaching success, to whom will you tribute the credit?

20. In your opinion, who is the best Division I Assistant Coach in the country?

How'd you do? I shouldn't even have to ask.

This article was originally published on April 29, 2019, but this scandal was one of the most memorable in UGA history.