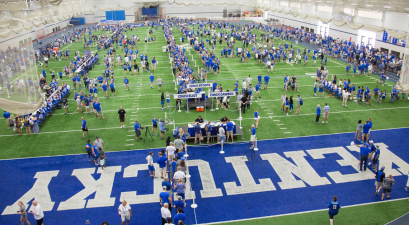 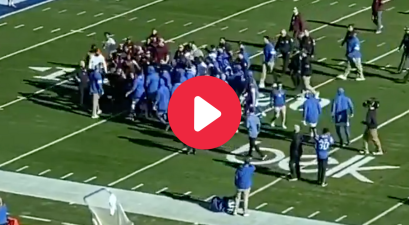 Last week, former Kentucky Wildcats and New York Giants quarterback Jared Lorenzen was admitted to the intensive care unit “battling an infection, kidney and heart issues,” according to a statement released by his family. Lorenzen, who had serious weight issues during and after his football career, was “fighting with everything he has.”

Sadly, his fight has ended. According to Matt Jones of Kentucky Sports Radio, Jared Lorenzen died on July 3, 2019 after spending six days in the hospital. He was 38 years old.

“The family of Jared Lorenzen would like to extend our sincere thanks and appreciation for all of your support and prayers over the past six days. We are deeply saddened to announce the passing of Jared today, July 3, 2019. Again, we appreciate all of the warm wishes and prayers, but as a family, we would request your respect and privacy. We will offer arrangement information in the coming days. Please keep Jared’s family and especially his children in your thoughts and prayers.”

Lorenzen was one of the greatest high school quarterbacks in the country growing up in Fort Thomas, Kentucky. He led Highlands High School to the Class AAA state championship in both 1996 and 1998 and garnered numerous awards, including being named Kentucky Mr. Football and First-Team All-State by The Associated Press after racking up over 4,000 yards and 60 touchdowns as a senior.

When he signed to play for the University of Kentucky Wildcats and coach Hal Mumme, Lorenzen’s success continued. The SEC Co-Freshman of the Year set the SEC single-season record for passing attempts (559), which still stands, became a semifinalist for the Davey O’Brien Award as college football’s top quarterback in 2002, and was second-team All-SEC in his final season.

We lost a great one too soon today. Our hearts are with the Lorenzen family.

As an undrafted free agent, Lorenzen signed with the New York Giants where he backed up Eli Manning for four seasons, and even won the Super Bowl XLII ring with the team. While there, Lorenzen was listed at 285 pounds, making him the NFL’s heaviest quarterback and earning the nickname “Hefty Lefty.” He finished his NFL career with just 28 passing yards, spent a short time with the Indianapolis Colts, then moved on to play for independent football leagues around the country.

It was during that time with the Kentucky Horsemen (af2) and Northern Kentucky River Monsters (Ultimate Indoor Football League) that Lorenzen would win MVP with the River Monsters in 2011 before retiring from football.

Lorenzen would jokingly and openly discuss his weight issues, but it became a serious problem later in life.

After leaving the game, Lorenzen announced he weighed over 500 pounds. Battling obesity, he launched The Jared Lorenzen Project, which chronicled his weight loss journey of over 100 pounds.

“Jared was a great teammate and friend. We competed against each other in college and came to the Giants together. My thoughts and prayers go out to his family. I will always remember his competitive spirit and his good nature. Jared has left us all way too soon.”
-Eli Manning pic.twitter.com/OdgZYZ4xvL

Keep the Lorenzen family in your thoughts and prayers during this time.