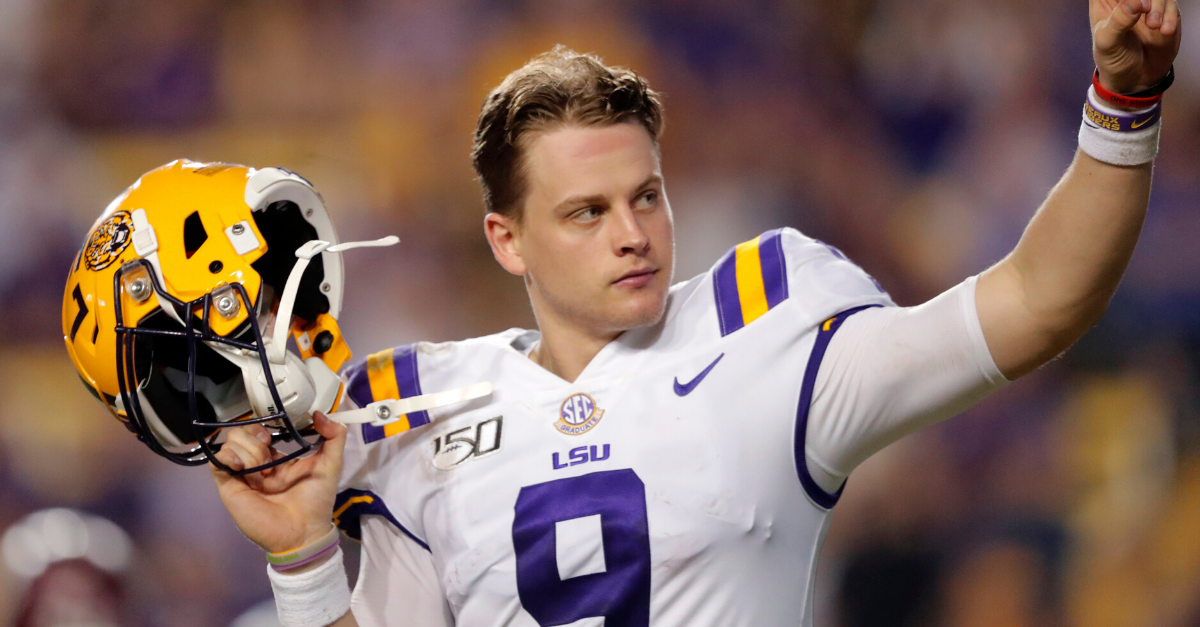 BATON ROUGE, La. (AP) ? Joe Burrow?s intention to give LSU fans one last memorable night in Tiger Stadium was as obvious as the name on the back of his jersey.

When the crowd realized during pregame introductions that it read, ?Burreaux,? a spelling evocative of Louisiana?s Cajun French heritage, roars of approval poured forth from the Death Valley stands.

And that was just the beginning.

Burrow padded his Heisman Trophy resume with 352 yards and three touchdowns passing, and No.1 LSU beat Texas A&M 50-7 on Saturday night to give the Tigers their first unbeaten regular season since 2011.

?I thought it would just be an awesome tribute to the state, to the university,? said Burrow, who?d largely grown up in Ohio and spent three seasons as a backup for Ohio State before transferring to LSU, where his football career took off. ?It?s been awesome not only for me, but for my family as well. … I?m going to miss it with all my heart and I couldn?t be more grateful.?

The crowd made certain Burrow knew the feeling was mutual, cheering wildly when coach Ed Orgeron ceremoniously called his star QB to the sideline for good after his 23rd completion early in the fourth quarter. Burrow raised his arms to salute the crowd before embracing coaches and teammates.

Who was Behind the BURREAUX Jersey in senior night? The @lsufootball QB explains.

Not sure I have seen such a love affair with a QB and his team/fans. Everyone in Tiger Country loves Joe Burrow. @LSUFootball and he loves them right back. pic.twitter.com/HM8PiXhooy

?Joe?s meant a lot to Louisiana and Louisiana is very proud of LSU football,? Orgeron said. ?The guy?s been phenomenal.?

Burrow?s highlights included a deep, pin-point accurate pass on a 78-yard touchdown to JaMarr Chase, who had 197 yards and two touchdowns on seven catches.

Burrow (who wore his regular jersey during the game) also hit Justin Jefferson with a 12-yard scoring pass, while his second scoring pass to Chase covered 18 yards.

Junior running back Clyde Edwards-Helaire was similarly called by coaches to the sideline a few plays after Burrow, finishing his night with 87 yards and a touchdown.

Chase?s touchdowns gave him 17 this season, building on the school record that the Biletnikoff Award finalist broke two weeks earlier. The sophomore receiver has 1,457 yards receiving this season.

LSU?s victory raised the likelihood the Tigers would receive a berth in the College Football Playoff even if they were to lose to No. 4 Georgia in next weekend?s Southeastern Conference championship game.

Currently, LSU is one of just three remaining undefeated Division I FBS teams in the nation, along with Ohio State and Clemson. Also, the Tigers had four victories over teams ? Texas, Florida, Auburn and Alabama ? that were ranked in the top 10 at the time of the matchup.