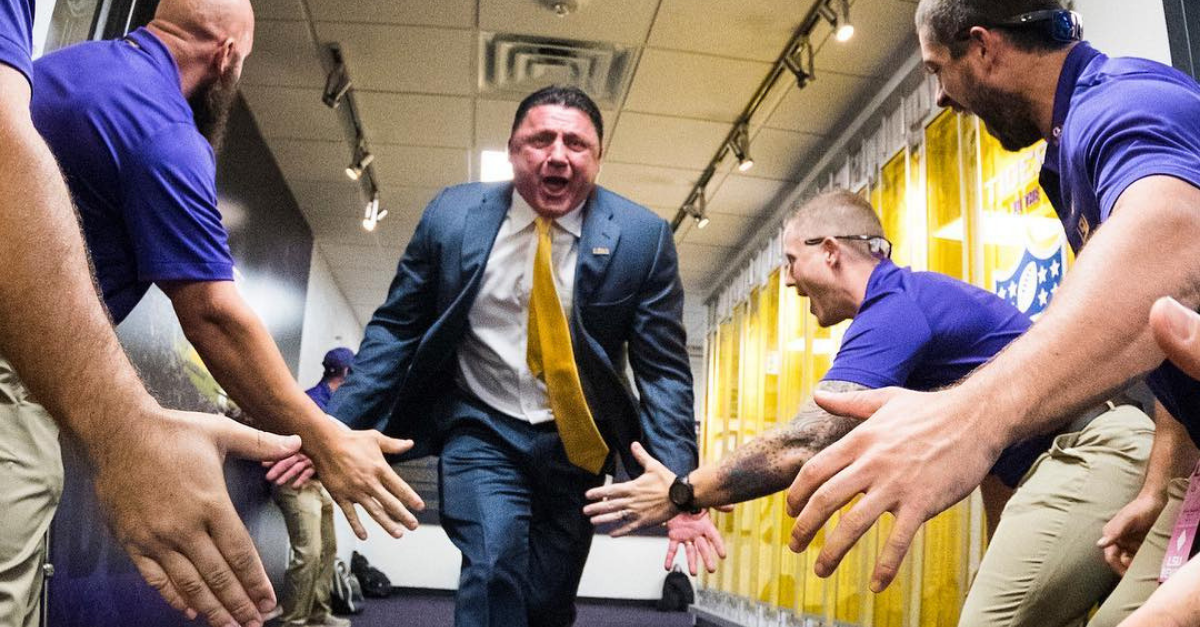 Prior to the start of the 2018 season, many people both inside and outside of Louisiana State University pegged head coach Ed Orgeron as a prime candidate for someone who was most likely to be fired. If Coach O was sitting on the proverbial hot seat prior to last season, he’s upgraded to a king’s throne after the season the LSU Tigers just put together.

Following a 10-3 record, postseason win over the UCF Knights in the Fiesta Bowl, and finishing the 2018 college football season ranked No. 6 in the final AP Poll, LSU head coach Ed Orgeron will receive a multi-year extension that figures to tie him to the Bayou for a long time, a LSU senior official confirmed to NOLA.com.

Under Orgeron’s current contract, the 57-year-old Louisiana native makes $3.5 million annually and is under contract through the 2021 season. According to USA Today’s database of college football coaches’ salaries, Orgeron ranks only No. 36 among the nation’s highest-paid coaches.

While specific details are still being finalized for the LSU Board of Supervisors to approve, Orgeron stands to make a lot more money for the job he’s done since taking over from Les Miles midway through the 2016 season.

Since taking the reigns in Baton Rouge, LSU football has remained one of the top college football destinations in the country. Orgeron is 25-9 since taking over, which includes 15 wins in the chaotic SEC, and has made three-straight New Year’s Six bowl games, winning two of them.

On the recruiting trail, Orgeron is even better. In 2017, Orgeron’s staff brought in the 7th-ranked recruiting class, according to 247Sports. The next offseason, the 15th-ranked class arrived at Louisiana State University following the team’s Citrus Bowl loss to Notre Dame. Just when ugly losses to Mississippi State and Troy made it seem like Coach O was losing his grip, the Tigers rebounded big in 2018.

Add the No. 8 recruiting class next year to a team that recorded the program’s first 10-win season since 2013, and you have the makings of a serious national contender brewing at LSU.

With the way his program is trending, plus an impending contract extension to validate the school’s support for their head football coach, it’s a matter of time before the purple and gold break through and put together a championship-caliber season.

With games next season against Texas, Florida, Alabama and Texas A&M, Coach Orgeron and LSU have a chance to improve on last season and make a serious push for the program’s first College Football Playoff berth in 2019.

READ MORE: Florida’s Dan Mullen Pulls Up in a Helicopter to Visit a Top Recruit