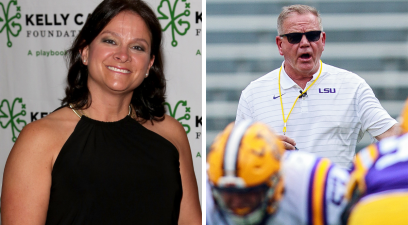 Beach volleyball is a staple of the Olympics, especially for Team USA.

The dynamic duo of Misty May-Treanor and Kerri Walsh Jennings dominated the sport for over a decade, and put the competition on the map for even the most casual fans.

For LSU Sports, the Tigers’ college beach volleyball team is popular, too.

In 2021, Kristen Nuss, a senior for the Tigers, became the winningest player in the history of the sport.

The team may not have brought a national championship to Baton Rouge, but Nuss did everything she could to get them there.

RELATED: Daredevils Play Volleyball While Volcano Erupts Behind Them

Nuss was a force to be reckoned with in high school at Mount Carmel Academy, and she took the court for the Tigers for the first time as a freshman.

She was paired with Claire Coppola, and the rest was history.

This duo became unstoppable quickly, and they were named the CCSA Pair of the Year in both 2018 and 2019. Nuss was also named an AVCA All-American during each of those seasons.

The pandemic shortened last season to a handful of matches, and head coach Russell Brock made some strategic changes, pairing Nuss with Taryn Kloth.

Nuss hasn’t missed a beat, and she is once again a part of the best pair in the nation. Most of the duo’s wins come in straight sets, signaling their ability to relentlessly attack on the court.

In April 2021, Nuss won her 125th career game, passing Izzy Carey of the UCLA Bruins for the most in NCAA history.

Unfortunately, this season’s LSU team dropped their final four matchup against the UCLA Bruins in Gulf Shores, Louisiana. While that loss will sting, Kristen Nuss became a legend this season.

Will she one day reach the Team USA roster as a result?