It's rare for a college football coach to win national titles at two different schools. The list is very short, including iconic names like Glenn "Pop" Warner, Howard Jones and Urban Meyer. But the cream of the crop is Alabama head coach Nick Saban, who is tied with fellow Crimson Tide legend Bear Bryant as the only coaches in history with six national championship rings.

What Saban's done since arriving in Tuscaloosa is hard to ignore. However, his five seasons leading the LSU Tigers from 2000 to 2004 were, quite simply, the springboard for LSU's program being the national champion they were in 2019.

Before Saban left the Michigan State Spartans and arrived in Baton Rouge, the LSU Tigers posted only three 10-win seasons between 1960 and 1999. By the time Saban was done, his teams won 10 games twice, including a 13-1 season and winning the BCS National Championship game in 2003. In the three years after his departure for the NFL's Miami Dolphins, Les Miles used Saban's roster to post a 34-6 record, culminating with another BCS title for the LSU football program in 2007.

Despite Saban absolutely owning his former team in recent years -- Alabama won eight-straight games between 2012 and 2018 -- that didn't end the admiration and legacy he left in Louisiana. In 2020, Saban was given the state's highest athletic honor and inducted into the Louisiana Sports Hall of Fame.

Entering the Louisiana HOF was never really on Saban's radar, but that doesn't mean Louisiana State University completely left his thoughts. In fact, Saban admitted that one of his biggest career regrets was leaving the Tigers for the NFL. 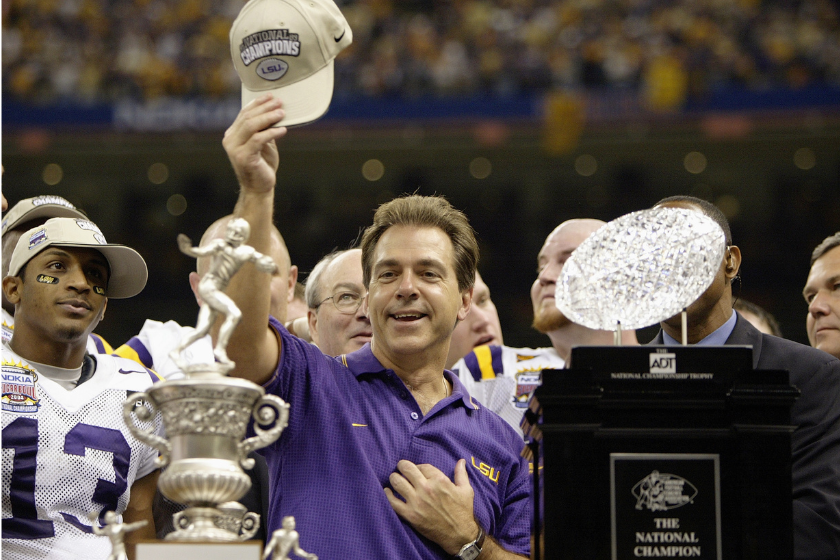 "As it turns out, what I learned from that experience in hindsight was, it was a huge mistake to leave college football," Saban said. "And I know a lot of LSU fans think I left for whatever reasons, but I left because I wanted to be a pro coach, or thought I wanted to be a pro coach. We loved LSU. We worked hard to build the program. If there was one thing professionally that I would do over again, it would've been not to leave LSU."

Sports are all about "what ifs", so it's only natural to think about what would've played out if Saban hadn't left LSU. The Tigers wouldn't only have a few more national championships, the whole college football landscape would be different. Alabama could still be trying to resurge their program. Kirby Smart might not be at Georgia. The butterfly effect is endless. You could ask the same thing about his NFL career with the Dolphins if they had signed Drew Brees.

Sure, Saban is the enemy in Crimson now, but he'll always have a place in Baton Rogue for bringing a national title to LSU.

This article was originally published September 18, 2019.

MORE: How a Punch Likely Got Brenton Cox Jr. Dismissed From His Team...Again