The Florida Gators haven't exactly hit the lottery when it comes to recruiting and developing quarterbacks this millennium. Obviously, Heisman Trophy winners like Steve Spurrier and Danny Wuerffel stick out from the 1960s and 1990s, respectively.

For the first time in what felt like an eternity, Florida finally got on the right track under signal caller Kyle Trask in head coach Dan Mullen's offense. The Gators have finished with 10 or more wins in 2018 and 2019, and Trask became a legit Heisman Trophy finalist in 2020. Things were good at the quarterback positions. That hasn't always been the case over the last 20 years.

Outside of about four or five quarterback names, Florida has been plagued by mediocre quarterback play in the 2000s and 2010s. The program has also gone through a few head coaching changes in recent years because of the instability at the position.

But without further ado, here is your comprehensive ranked list of 15 UF starting quarterbacks since 2000. 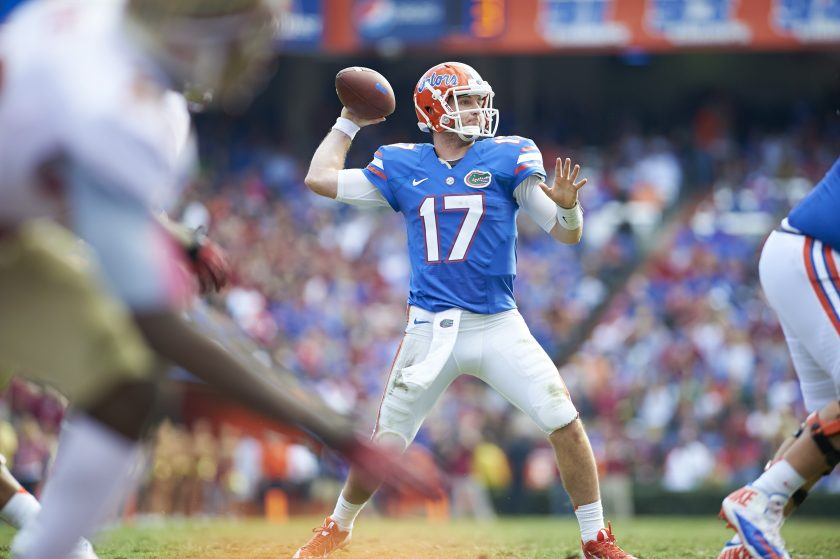 Mornhinweg, the son of former Baltimore Ravens offensive coordinator Marty Mornhinweg, probably had no business starting at Florida. He started the final three games of the 2013 season, passing for just 344 yards -- all in losses. That was also the year the Gators finished 4-8. And lost to Georgia Southern. Don't act like you forgot. 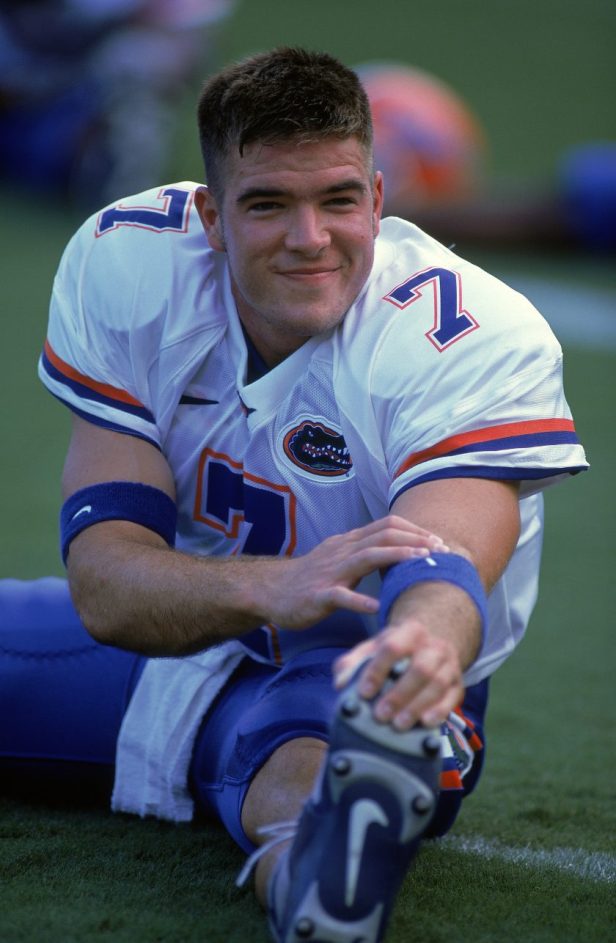 Despite being a highly-touted prospect coming out of high school, Berlin was never able to beat out Grossman during his two years in 2000 and 2001. His lone start came in the 2002 Orange Bowl because Grossman was benched for violating curfew, but it wasn't long into the game before Grossman replaced him. Berlin transferred to Miami and famously defeated the 18th-ranked Gators as the Hurricanes' starter in 2003. 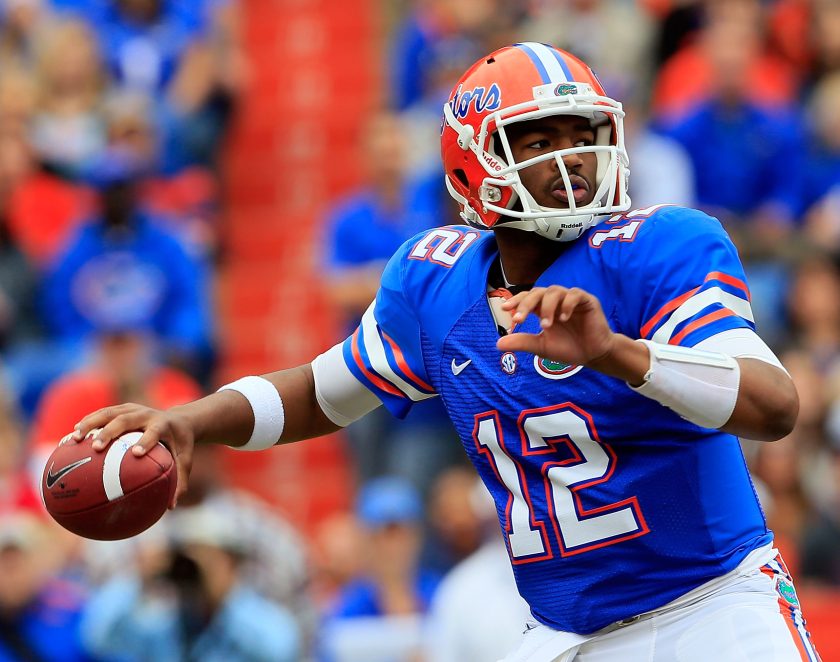 Brissett probably wasn't ready to start when he did, but he was thrown into the fire anyway in 2011. In fact, he became the first true freshman quarterback at UF to take his first career snap as a starter, and it came against top-ranked LSU. Brissett threw for just 455 yards and three touchdowns in parts of 13 games for Florida before transferring and starring at North Carolina State. Now, he's a backup in the NFL. 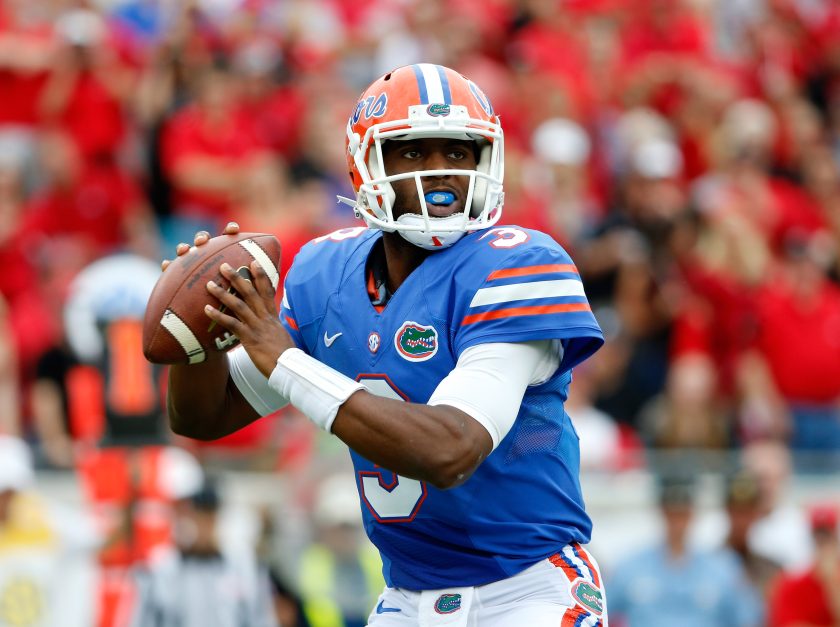 The Steelers converted Murphy into a wide receiver, which should tell you all you need to know. Murphy didn't do much during his 2013 season at Florida -- he tossed six touchdowns and five interceptions in seven games -- but he did go on to do well at Boston College, where he at one point broke the ACC single-season record for rushing yards by a quarterback. 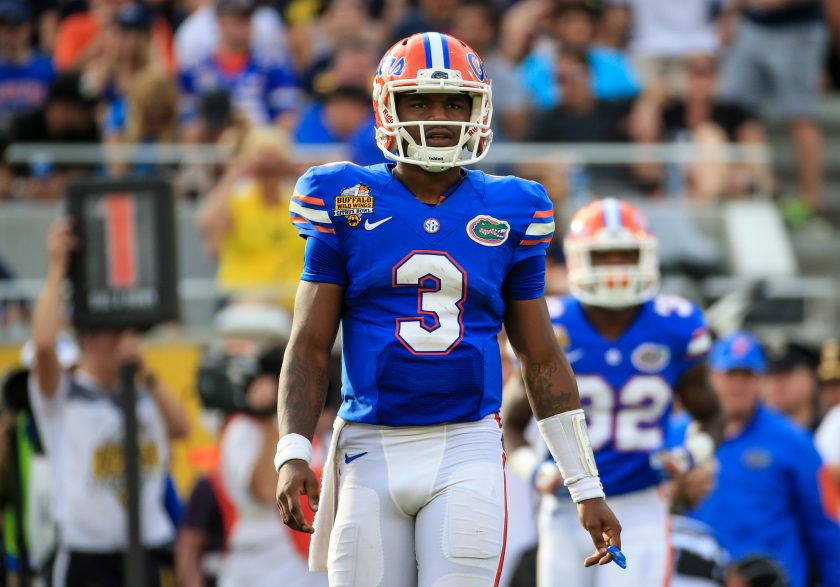 Fans were calling for Harris in 2014 when Driskel was struggling, and they probably regret that decision. He compiled 3,265 total yards during his 20 games between 2014-15 but totaled just 22 touchdowns, four of which were either rushing or receiving. 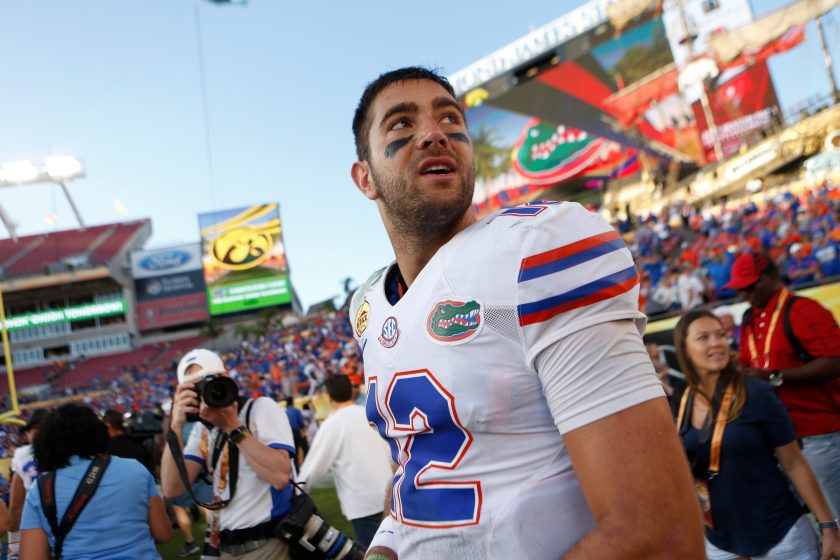 Luke Del Rio's backup in his lone season for the Gators in 2016, Appleby was decent under center. In nine games, he threw for 1,447 yards and 10 touchdowns. He was also the first graduate transfer to ever start at quarterback for Florida and wrapped up UF's 9-4 campaign with a 30-3 win over Iowa in the Outback Bowl. 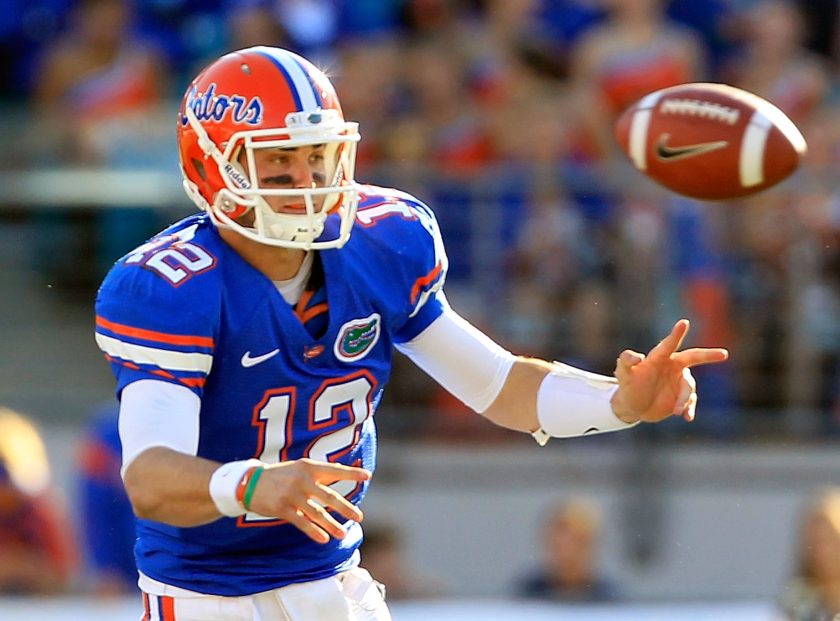 Brantley didn't take over as the starting quarterback until in 2010 after Tim Tebow left. During his final two years in '10 and '11, he passed for 4,105 yards and 20 touchdowns but added 17 interceptions. Florida was also a combined 15-11 over that time. 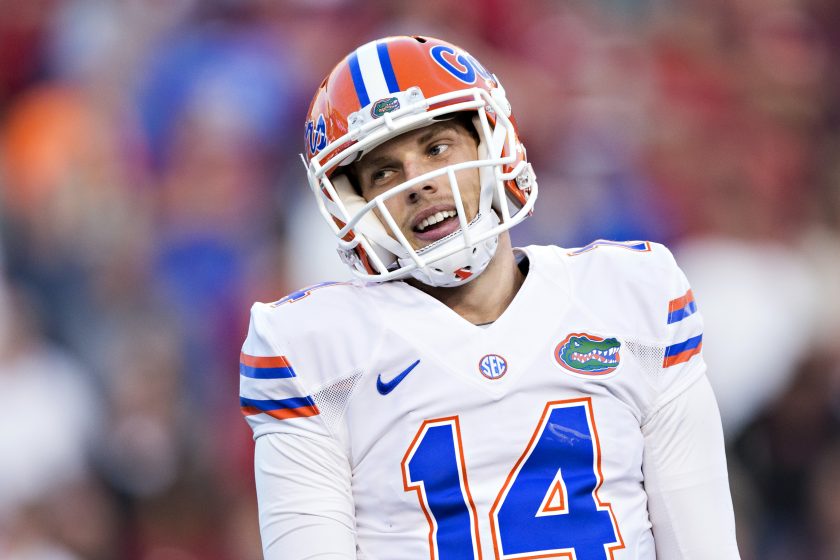 Here is another quarterback who was hamstrung by injuries during his career at Florida. After sitting out in 2015 due to transfer rules, Del Rio played in just eight games during his two-year stay in Gainesville. He threw for 1,637 yards, nine touchdowns and was 6-1 as a starter. 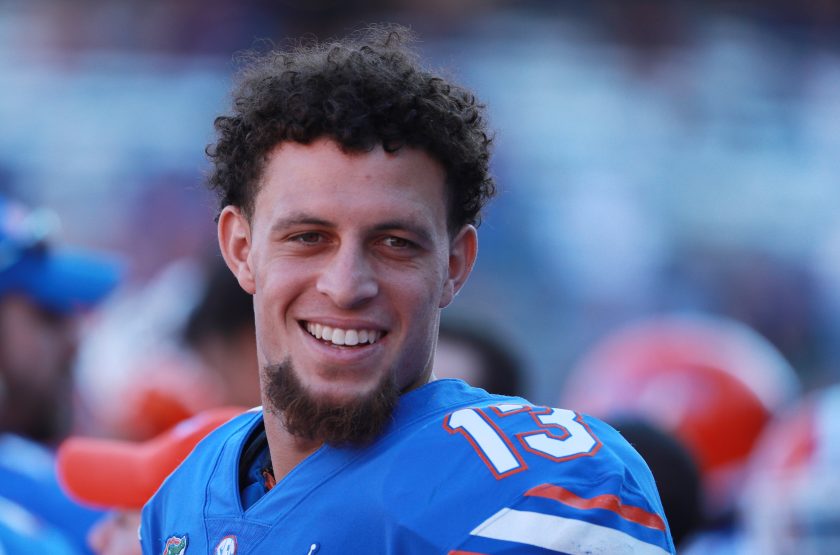 Franks showed both bright and dark spots while in Gainesville. He improved his passer rating from 113.3 in 2017 to 134.8 in 2018, but he went down with injury early in the Gators' 2019 season. He transferred to Arkansas for his final season thanks to the rise of Kyle Trask. 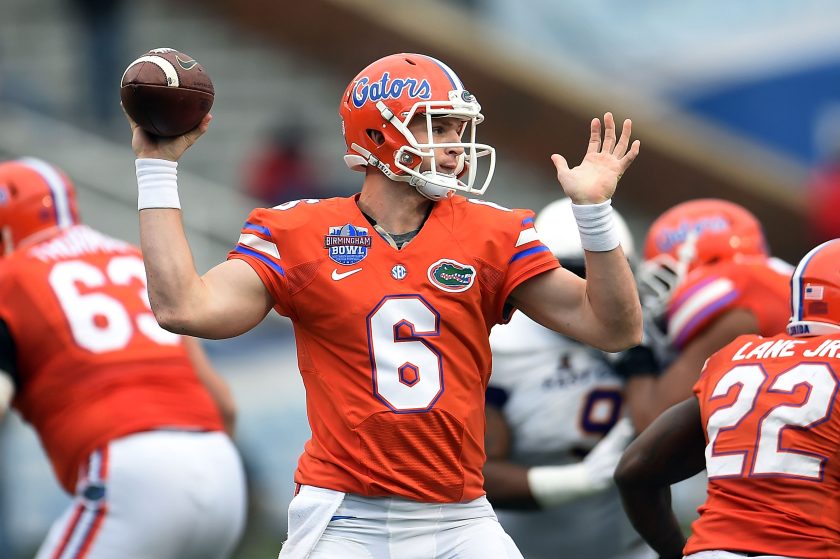 The one stat that will break your heart: In one season at Louisiana Tech, Driskel threw for more yards and touchdowns than he did during four years at Florida. Much of his Gator career was derailed because of a broken leg he suffered in 2013 and never truly regained his form.

Driskel's sophomore season in 2012 was actually decent, though. He threw for 1,646 yards and 12 touchdowns and rushed for another 413 yards with four touchdowns. Behind a phenomenal defense, he helped the Gators to an 11-2 record, and if not for a 17-9 loss to Georgia, they may even end up playing for a national championship. 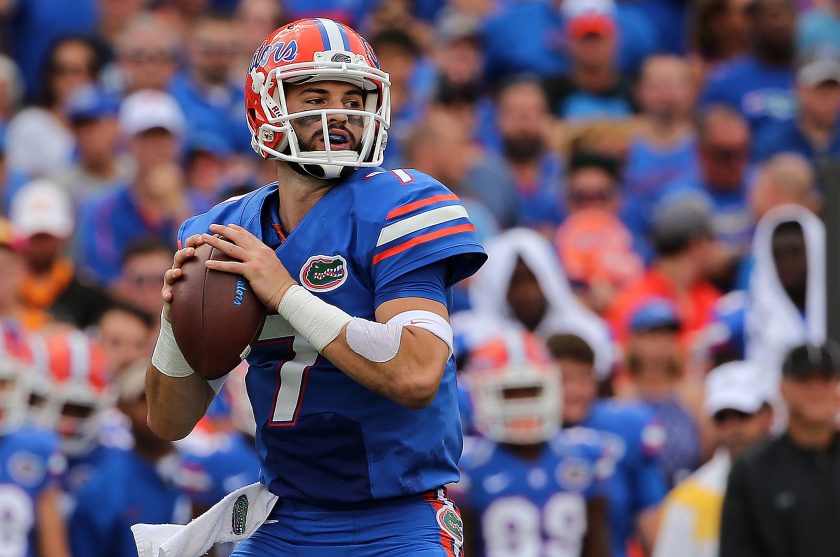 What could've been. Before Will Grier was lighting up secondaries at West Virginia, he dominated SEC schools at Florida in 2015. The Gators were a perfect 6-0 under Grier, which included a resounding win over No. 2 Ole Miss and a thrilling comeback win over Tennessee at home.

Grier's 1,202 passing yards and 10 touchdowns were lost on the fact that he was suspended in the middle of the season for PEDs, which led to a messy transfer to the Mountaineers. Regardless, his talent and short-lived success at Florida make him the deserved five spot here. 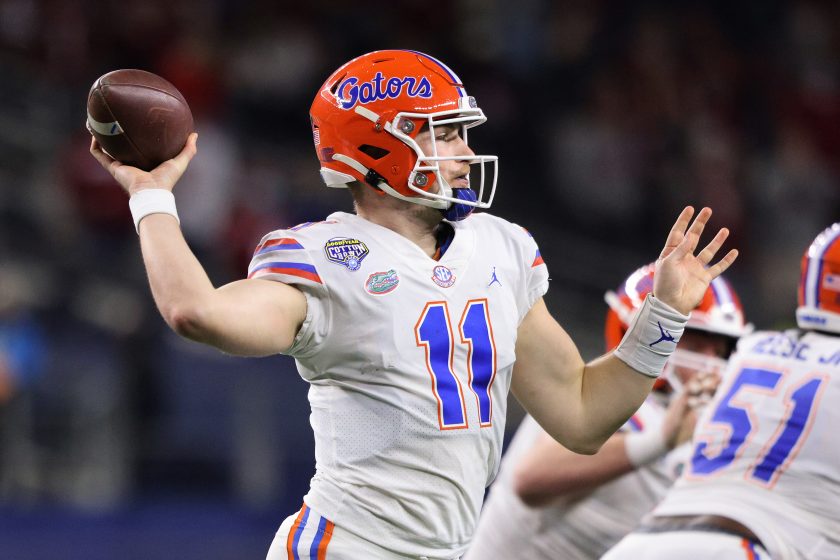 Trask in 2020 led the country with 43 passing touchdowns and finished second in passing yards (4,283) to Alabama's Mac Jones. He finished fourth in Heisman Trophy voting. The Gunslinger waited his turn to start in Gainesville and he lived up to his nickname. He nearly defeated Alabama in the SEC Championship Game and will forever be remembered as a terrific passer in Florida Gators history. 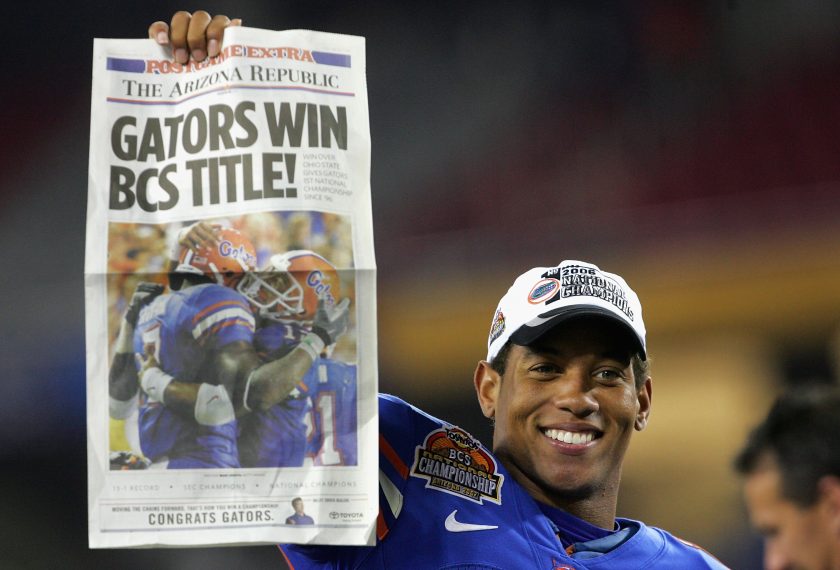 You could argue Leak deserves to be one spot higher, seeing as he threw for a program-record 11,213 yards during his four-year career. But the most he ever compiled in one season was 3,197 in 2004. Tebow and Grossman (twice) both threw for more in a single season.

Leak, however, did lead the Gators to their 2006 National Championship under Urban Meyer and helped usher in an era of dominance. He finished his career with 101 total touchdowns, third most in UF history behind Tebow and Danny Wuerffel. 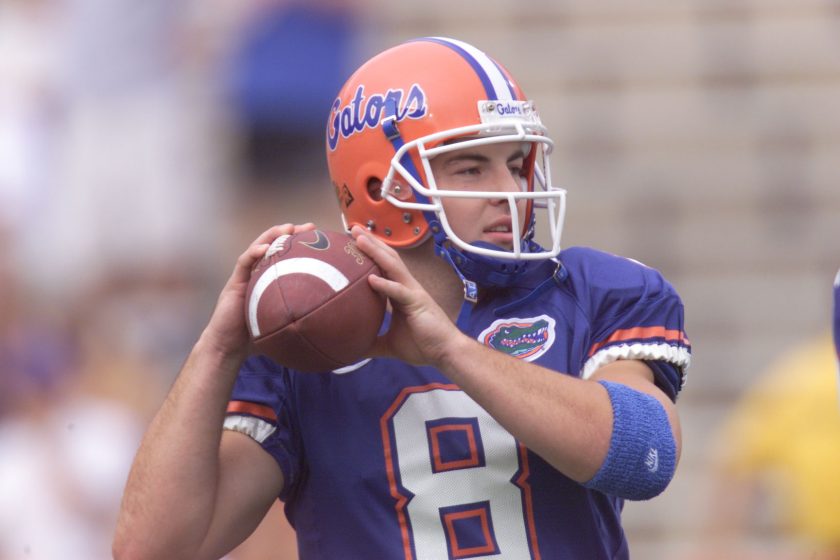 The only other first-round pick on this list, Grossman put together some ridiculously consistent and efficient seasons in Gainesville from 2000-2002. As a freshman in 2000, he tallied an efficiency rating of 161.81, which ranked third all-time for a freshman behind only Mike Vick and Donavan McNabb.

Grossman's 2001 First-Team All-American campaign may have been his best. During Steve Spurrier's final year as UF's head coach, the quarterback averaged an NCAA record 9.1 yards per play. He finished second in a close Heisman Trophy vote to Nebraska's Eric Crouch.

Grossman threw for 77 touchdowns and more than 9,000 yards as a Gator. He finished his three-year tenure with a 146.77 career passer rating, which at the time ranked third all-time in the SEC. 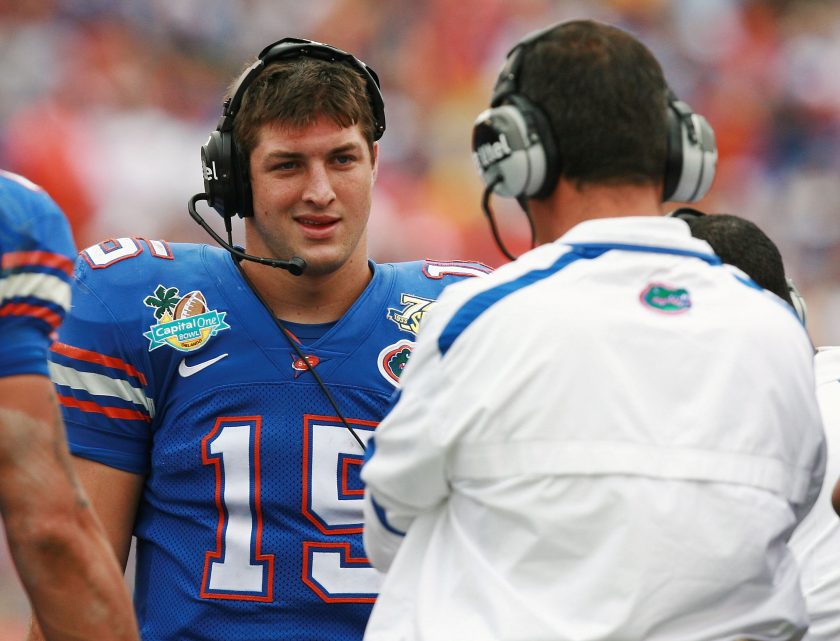 One Heisman Trophy. Two national titles. More than 12,000 total yards and 145 touchdowns. Four great years and forever defining what it means to be a Florida Gator.

Tebow is the obvious choice here for so many reasons. He backed up Chris Leak his freshman year during UF's 2006 National Champion run, won the Heisman in 2007 and took the Gators to another National Championship in 2008.

Tebow's name is sprinkled all over Florida's record book, but he may be more memorable for his passionate speeches and tremendous character than his on-field accomplishments. Leaders like Tebow only come around so often. It may take another quarterback of his caliber for Florida to return to national dominance.

This article was originally published November 19, 2018. It was updated following Kyle Trask's tenure.