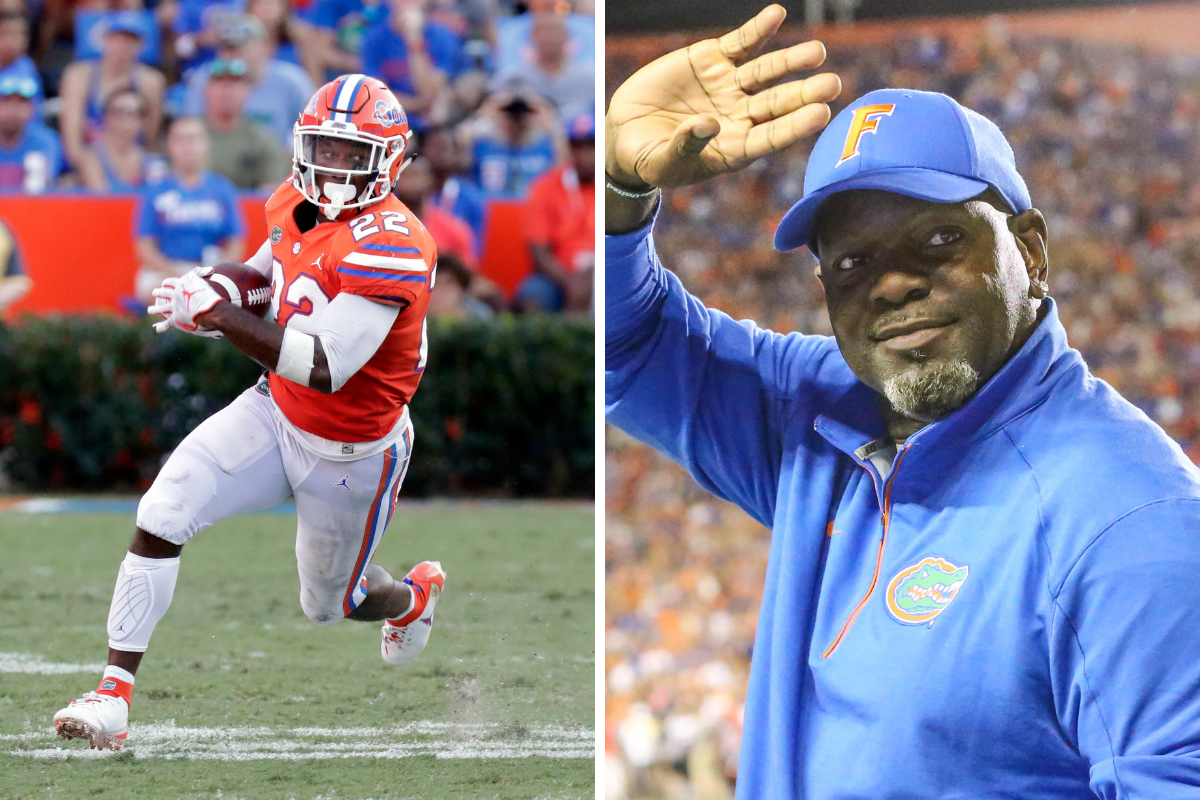 When you think of a Florida Gator running the football, you might think of Emmitt Smith or  Tim Tebow. Tebow, of course, was a quarterback and not a running back, but there have been plenty of good backs to step into the backfield for the Gators. Yes, even during Steve Spurrier’s pass-happy days down in Gainesville.

Head coach Dan Mullen is hoping for the next Tebow or Smith as he figures out what to do with his offense now that Florida football is moving on from Kyle Trask to Emory Jones under center. It could be time for a dynamic running back to take the reins in Gainesville.

Until then, we can sit back and debate the 10 best running backs of all time for the Gators.

When Demps and wide receiver Percy Harvin were on the field for the University of Florida, there was not a defense in college football that could match the speed the Gators had. Demps broke the high-school record for the 100-meter dash and competed at the 2012 Olympics. He never got a ton of carries, but he did a ton with them. In 2008, when Florida won the national title, Demps averaged 7.5 yards per carry and notched seven rushing touchdowns.

Rainey was also on the 2008 title-winning team, and he also was an All-American track athlete in college like Demps. Did the offensive line ever have to block for more than a couple seconds with these guys? Rainey contributed as a rusher, receiver and returner, and he was first-team All-SEC in 2011. He spent a bit of time in the NFL but has primarily played professionally in the CFL (where he still plays today).

DuBose was considered a fullback, but back in the 1970s that was not a bad thing. As a senior, he rushed for 1,402 yards, including 204 rushing yards against in-state rival Florida State. That season he was named the SEC Player of the Year and it surely played a big role in being inducted into the University of Florida’s Athletic Hall of Fame.

Perine only recently left the Gators, as he was taken in the fourth round of the 2020 NFL Draft. While he never put up big numbers, he was always a solid contributor, which is why he ranks eighth in career rushing yards at Florida. He rushed for over 400 yards in all four of his seasons with the Gators and finished his NCAA career with 28 total touchdowns.

Graham was a touchdown machine at the turn of the millennium. After finding the end zone 11 times as a senior he capped his college career with 33 rushing touchdowns. Graham was on the SEC All-Freshman team and made a second-team All-SEC squad as well before heading to the Tampa Bay Buccaneers for several seasons.

?At 5-foot-11 and 235 pounds, Williams was the kind of back that could match some linebackers in size. While he had to share carries with the next name on this list, Williams was still second-team All-SEC in 1984 and 1985 as he helped lead the Gators to a 9-1-1 record in both seasons. He then was a first-round pick in the NFL and made two Pro Bowl squads.

It’s Anderson who shared the backfield with Williams in the ’80s for the Gators, and what a pair they made. Anderson racked up over 100 yards in 14 different games across his college career and ranks third in school history in rushing yards. He’s also third in career rushing yards for the Chicago Bears, where he was the heir to Walter Payton after he retired.

?Fred Taylor was part of a three-year run of SEC titles for the Gators from 1994 through 1996. He was a big-play back with a lot of rushing yards even though injuries kept him from full seasons over that time.

In 1997, he stayed healthy and was All-SEC with 1,292 rushing yards and 13 rushing touchdowns. Taylor became the ninth-overall pick of the Jacksonville Jaguars and is probably the best running back in Jaguars history. Fred’s son, Kelvin Taylor, also played at Florida and was a candidate for this list as well.

Florida won SEC titles in 1991 and 1993, and fittingly enough Rhett was named All-SEC in both of those seasons. He also was an All-American in 1993. Rhett owns the program record for career rushing yards with 4,163, which might surprise some considering the next name below. He was a great college back, but he’s only second on this list.

Hey, it’s no discredit to Rhett to finish second on this list to one of the best football players of all-time. Smith is the only Pro Football Hall of Famer on this list and also the NFL’s career rushing yards leader. Of course, this is a college list. His pro numbers don’t matter.

Smith made his first start as a freshman in 1987 against Alabama. He proceeded to break the school’s single-game rushing record with 224 yards. By the time his college career was over, he owned 58 school records. The best two single-season rushing marks in UF history belong to Emmitt, as do the best two single-game performances.

Smith played three years of college ball and was All-SEC three times. If not for the fact that the 1990 NFL Draft was the first that made juniors eligible, he would definitely still have many of those records, including career rushing yards. Nobody ran like Emmitt Smith down in Gainesville.