If Your Favorite SEC Team Was a Car, This Is What They’d Be 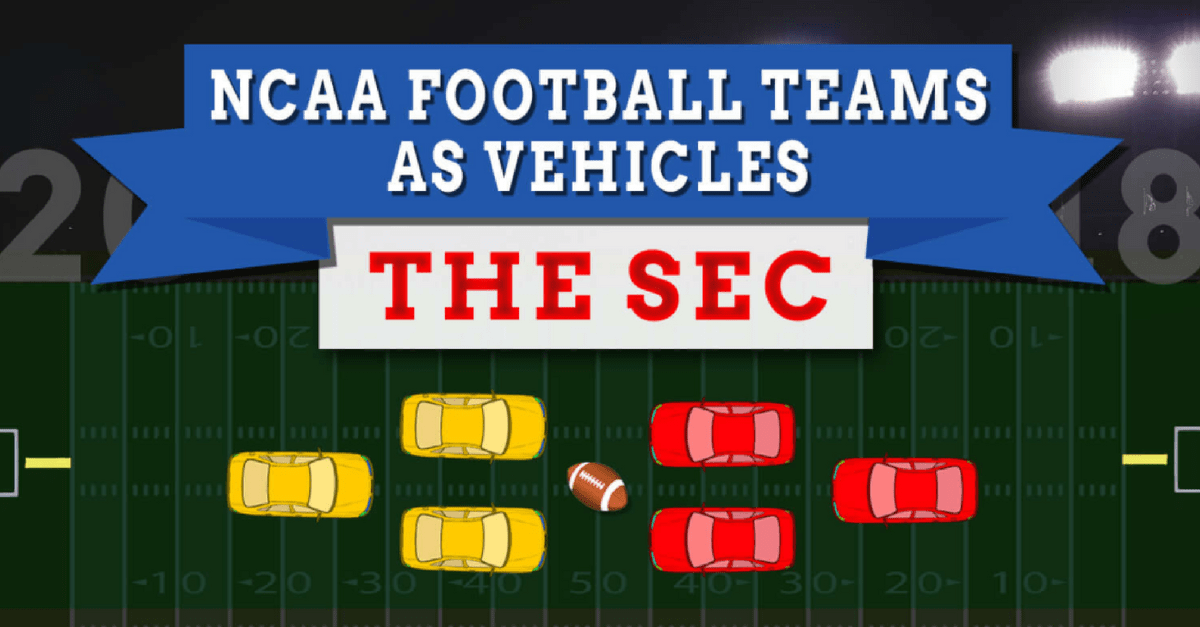 Football is peaking over the horizon, and it can’t come soon enough. From training camp injuries to scandals that two coaches may never recover from, we need some live game action to help break this August slump.

What makes college football great is that every football program is unique, casts a specific shadow on the games they play, and bring their own style to every game. Some play up-tempo, others are grinding and methodical, but how exactly do you compare one program to another? Well, let’s try cars.

Our friends at CJ Pony Parts have made it a tradition to create these awesome crossovers of college football programs with the cars they best represent. The Southeastern Conference is the premier conference in college football (at least according to Paul Finebaum), so the best place to start is with the cream of the crop.

These cars are awesome, and the best part is that we can’t find one to disagree with, can you?

ALA: The Grand Cherokee is perfect. Bama rolls over everyone, hogs the road and would probably win every collision it gets in. The only other thing closer? A military-grade Humvee.

AUB: The Challenger is fast and flashy, just like the Tigers offense. It’s just like Gus Malzahn’s team — it doesn’t last very long and usually has an issue under the hood.

MSST: The Subaru WRX — it’s your 20-year-old nephew’s favorite car, he drives it too hard and probably wears out the clutch earlier than he should. The Bulldogs start fast, but usually can’t make it very far.

TAMU: Hands down though, this one the funniest of this group. Texas A&M, with all the flash and allure of the 12th Man, can’t ever seem to get past their eighth win.

MISS: Somebody put out the sun? I’m feeling a little SHADE coming over the Rebels. Ole Miss is in the midst of a two-year bowl ban. They have some tools, but it’s just not going to matter in the end.

LSU: Everybody knows Jaguar — it’s fast and luxurious, but their best days are behind them. Now, they’re just taking up space in some rich family’s driveway.

ARK: The Chevy Tahoe might be the ideal fit for the Razorbacks. They always grind hard, never really being better than average, but they’re doing what they can to keep up with the big boys.

KEN: The Wildcats might be the most middle-of-the-road football team in the SEC, so why not make their pick based on geography? They’re trying hard, but it’s just not their race to win.

MIZZ: Shoutout to the people at CJ Pony Parts, because this one just makes us laugh out loud.

VAN: Oh my, the shade is real. The Commodores don’t have much to hang their hat on. They’re trying to survive, just don’t trust them in any kind of collision.

FLA: The Gators are spoiled, having dominated the early 2000s with Tim Tebow, Urban Meyer and company, but lately? They’re just hoping they can stay on track for now.

SC: This is the ultimate — “It’s fine. I’m fine.” — moment of the entire list. Sure, the Gamecocks play football, but are they really relevant?

UGA: Growing up, my dad owned two different Ford trucks that lasted 180,000+ miles each. The Bulldogs are loaded right now, and they’re setting up to make a national title run for years to come.

TENN: The Volunteers are the ultimate BMW — they’re steeped in tradition, have been around forever, but they’re not getting any better. Luxurious? Sure. Flashy? Yeah. Worth it? Nah.