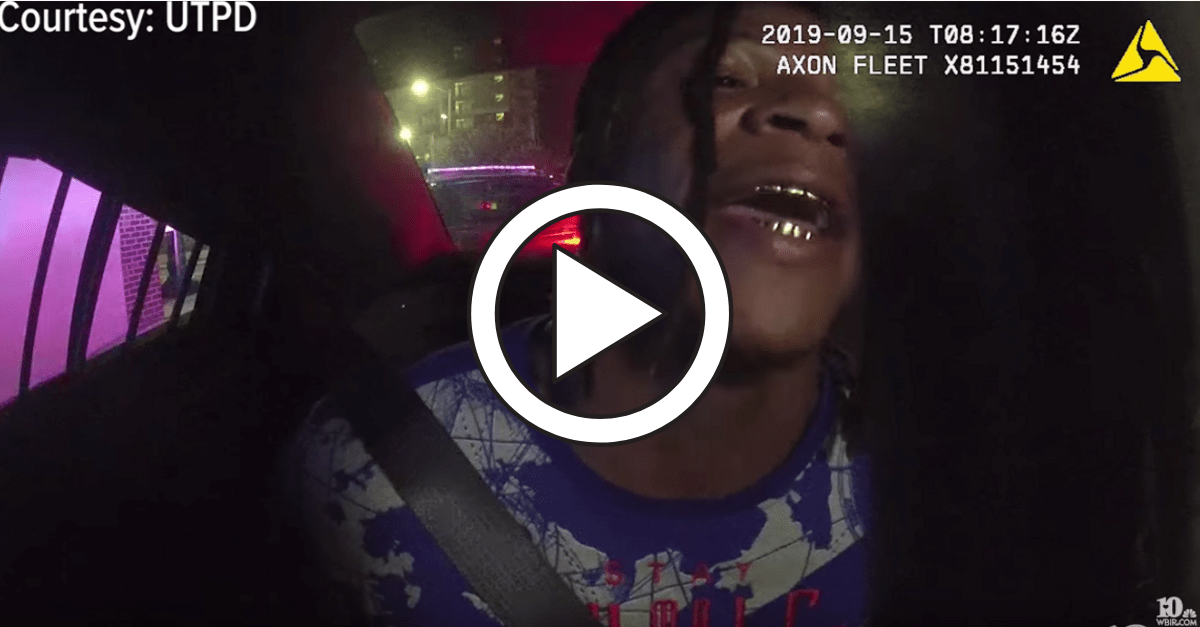 Tennessee Volunteers linebacker Jeremy Banks transitioned from running back over to the defensive side of the ball for the 2019 season. Against UT-Chattanooga, the sophomore from outside Memphis, Tennessee became the first UT linebacker since 1981 to intercept two passes in a single game. The talented 19-year-old is an important piece of head coach Jeremy Pruitt’s defensive rotation, which apparently makes Jeremy Banks feel invincible around Knoxville.

At least, that’s what it looked like after WBIR obtained bodycam footage of Banks being arrested back on September 15.

According to WBIR, Banks was pulled over after making an illegal U-turn when police found that Banks had an outstanding warrant for a failed to appear in Knox County. Back in July, Banks was charged with driving on a suspended license.

This routine traffic stop, however, became anything but routine. Initially after being placed in the back of the patrol car, Banks was calm. Then, the former four-star recruit became hostile and began intimidating the officers in the front seat.

“Ma’am, I don’t think you want to be an intern because where I’m from, we shoot at cops,” Banks says to a female police officer.

“What?s your name?” Banks continues, “I remember faces, too. What’s your name, intern? You go to school here, huh? You going to see me around. That ain’t a threat. I just want to let you know.”

“I should’ve ran, test y’all’s speed,” Banks said later. “Y’all would?ve never catch me. That’s what I should’ve did. Next time, I am, I promise you. Never again y’all boys will take me to jail. Not UT police.”

Don’t worry. Once on the road, Banks says, “Y’all police are so nice. I ain’t never met no police as nice as y’all.”

Before Banks goes on his tirade, perhaps the strangest part of the video was how Tennessee head coach Jeremy Pruitt, who was called at Banks’ request, handled the situation over the phone.

“This is the silliest [expletive] I’ve ever seen in my life,” Pruitt is heard saying over the phone. “I got it. I understand. I worked at four places, and they never had any [expletive] like this, except for here because the people usually say, ‘Hey, something?s not right here.'”

The only thing silly about this situation is how Banks handled himself.

“I want to sincerely apologize to my family, the University of Tennessee and the law enforcement community. I deeply regret my language and attitude in the video. I have great respect for our policemen and women, and I am embarrassed by my actions that night. That’s not who I am. I promise to be a better representative for the University of Tennessee moving forward.”

Jeremy Pruitt said in a statement that Banks’ actions were “unacceptable and [he] portrayed himself and our football program very poorly,” adding that the matter will be handled internally.

As of initial publishing, Banks is still a member of the Tennessee football team.

Many in Vols nation aren’t happy with how Pruitt handled this situation and am allowing Banks to remain a Volunteer. Exact punishment isn’t known, but for many, the only logical choice for Jeremy’s behavior should be to remove the sophomore college football player from the program immediately.

No chance Pruitt should allow Jeremy Banks to stay on the team after his comments towards the police. Shows a lot about Pruitt if you ask me

UPDATE: The Tennessee football program announced on October 4 that Jeremy Banks was dismissed from the program. In a statement, Coach Pruitt said the university will “continue to support” Banks as he prepares for the next steps.