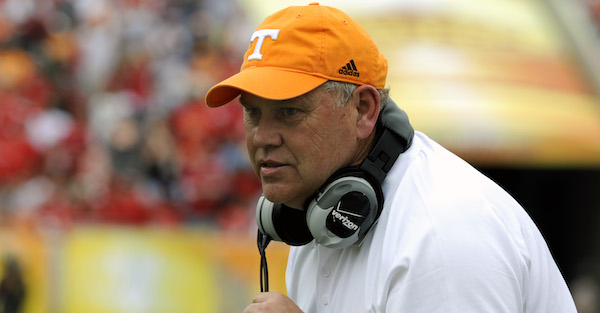 Tennessee may have finally found its next head coach.

The Vols are reportedly “in the process of trying to finalize a deal” with Alabama defensive coordinator Jeremy Pruitt, according to ESPN’s Chris Low.

Sources tell ESPN that Tennessee is in the process of trying to finalize a deal with Alabama defensive coordinator Jeremy Pruitt after offering him the job earlier in the day. Vols also interviewed Auburn DC Kevin Steele and Georgia DC Mel Tucker.

Tennessee insider John Brice of Gridiron Now reported that Pruitt is expected to be officially introduced as the Vols’ head coach during an early-afternoon press conference on Thursday.

Am told there will be an early-afternoon press conference Thursday at Tennessee to introduce new @Vol_Football head football coach Jeremy Pruitt, the nation’s top defensive coordinator and a multiple national recruiter of the year honoree.

Brice also confirmed that the Vols’ “full focus is on” Pruitt and that his coaching role in the Tide’s College Football Playoff game is unlikely to be an issue, according to multiple sources.

Per two sources who just spoke to me via phone, @Vol_Football “full focus is on Jeremy Pruitt. I don’t think the playoff is going to be an issue.”

The deal is reportedly worth between $4.1-4.2 million over six years, according to The Read Optional’s Trey Wallace.

On Wednesday, Yahoo Sports’ Pete Thamel reported that Pruitt emerged as the favorite to land the Tennessee head coaching job.

Source: Alabama DC Jeremy Pruitt has emerged as the leading candidate at Tennessee.

Sports Illustrated?s Bruce Feldman also reported that Pruitt was a top candidate for the Vols’ coaching vacancy on Wednesday and noted the coordinator’s value to the Crimson Tide’s success beyond defensive play calling.

Re: #Tennessee coaching search: Thing I’ve heard quite bit this week regarding Jeremy Pruitt is his value at #Alabama goes well beyond being just an excellent DC w/ schemes, he’s someone Saban really counts on to help set the tone in development & recruiting.

Pruitt, an Alabama alum, has served as the Crimson Tide?s defensive coordinator during the past two seasons after having previously held the same position at Georgia (2014-15) and Florida State (2013), where he helped lead the Seminoles to a national championship.