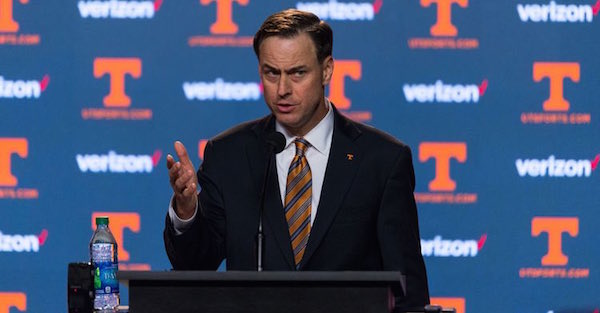 How much will John Currie’s termination cost Tennessee?

According to Volquest’s Jesse Simonton, UT would owe Currie $100,000 for the remaining 54 months ($5.4 million total) of his contract if he isn’t dismissed for cause.

However, if the university can prove that the termination was justified with cause, it would avoid paying the former athletic director.

Currie was fired on Friday morning after just eight months on the job, according to WVLT in Knoxville.

Earlier this week, Sports Illustrated?s Bruce Feldman reported boosters were attempting to drive Currie out of Knoxville after multiple reports claimed the Tennessee was ?finalizing a deal? with Ohio State defensive coordinator Greg Schiano, which resulted in protests by fans through social media and on Tennessee’s campus.

Currie is expected by many to be replaced by former Tennessee head coach Phillip Fulmer, who was also initially considered a candidate for the athletic director position earlier this year.

According to Feldman, Fulmer has “tried to undermine Currie in hopes of becoming the athletic director.”

Industry source: “Throughout this entire (#Tennessee) coaching search Phil Fulmer has tried to undermine AD John Currie in hopes of becoming the AD there.” https://t.co/Z2v03Nkd2h

It’s worth noting that Currie had previously worked in Tennessee’s athletic department and was instrumental in Fulmer’s forced resignation in 2008.