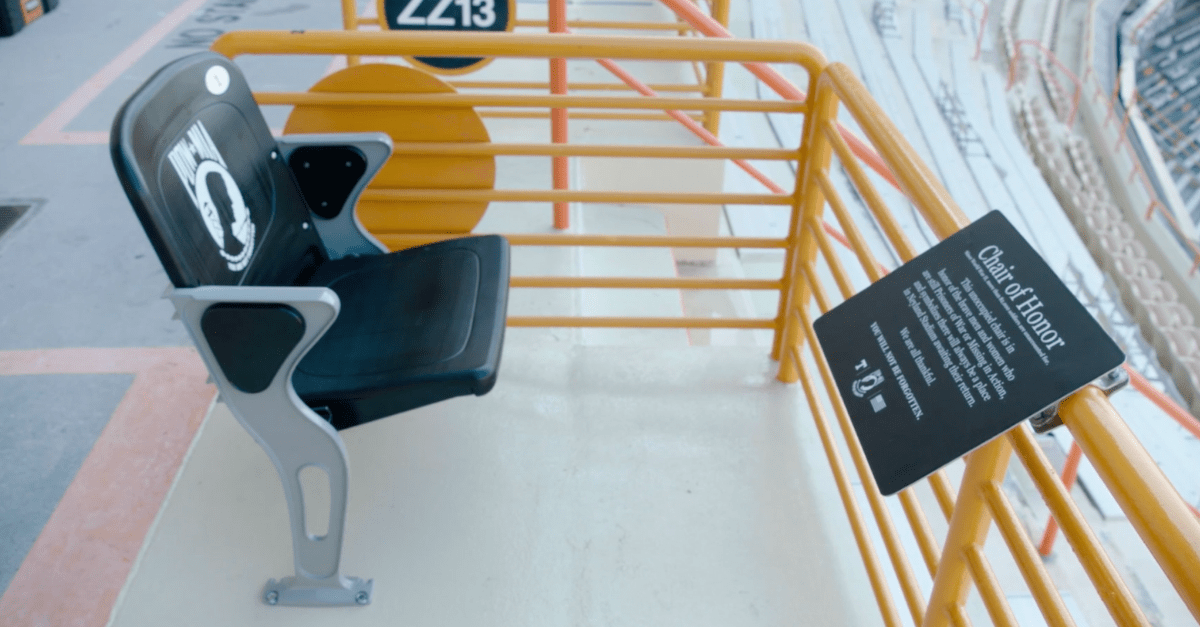 More than any lions, tigers or bears, the Tennessee Volunteers carry a name that represents so much more than what their athletic programs are recognized as. To be a true volunteer, one must be understanding, giving, and most of all, selfless.

While some acts of kindness show how Volunteers conduct themselves off the field, there are some actions that transcend sports. At Neyland Stadium, the university has installed a simple chair, adding to the stadiums 102,455 seats already filled on game day Saturdays. This one, though, will forever remain empty in honor of those who cannot be present for the game.

In a press release, Tennessee’s Director of Athletics Phillip Fulmer said that the new POW/MIA Chair of Honor represents the strong military community of East Tennessee and “is one more element we hope will pay tribute to the military community?in this case, the brave men and women who are still prisoners of war or missing in action.”

Fulmer added, “As the (chair’s) plaque reads, there will always be a place in Neyland Stadium awaiting their return.”

Since World War II, more than 82,000 soldiers are unaccounted for.

This unoccupied chair is in honor of the brave men and women who are still Prisoners of War or Missing in Action, and symbolizes there will always be a place in Neyland Stadium awaiting their return.

We are all thankful.

You will not be forgotten.

Two additional seats will be saved for the “Volunteer of the Game” near the Chair of Honor in section ZZ12. They overlook the retired numbers of Clyde “Ig” Fuson, Rudy Klarer, Bill Nowling and Willis Tucker. The four Tennessee football letterman lost their lives serving in World War II.

The chair is meant to remain vacant in honor of those who made the ultimate sacrifice for the freedoms we enjoy today. #POWMIARecognitionDay https://t.co/ScTBJVTJxE

In addition to the Chair of Honor, Neyland Stadium will fly the National League of Families POW/MIA flag at every game and will debut during the Vols game Saturday night against the Florida Gators.

This is a move extending beyond branding and team accomplishments. The University of Tennessee deserves praise for the small gesture that will be felt by the thousands of families impacted by the unidentified losses of war.

For men and women of the armed forces who are still missing, they made a sacrifice that cannot be repaid. They’ve already paid the ultimate price, going where others will not or could not.

READ MORE: If You’re a Tennessee Fan, This Video on Neyland Stadium is For You