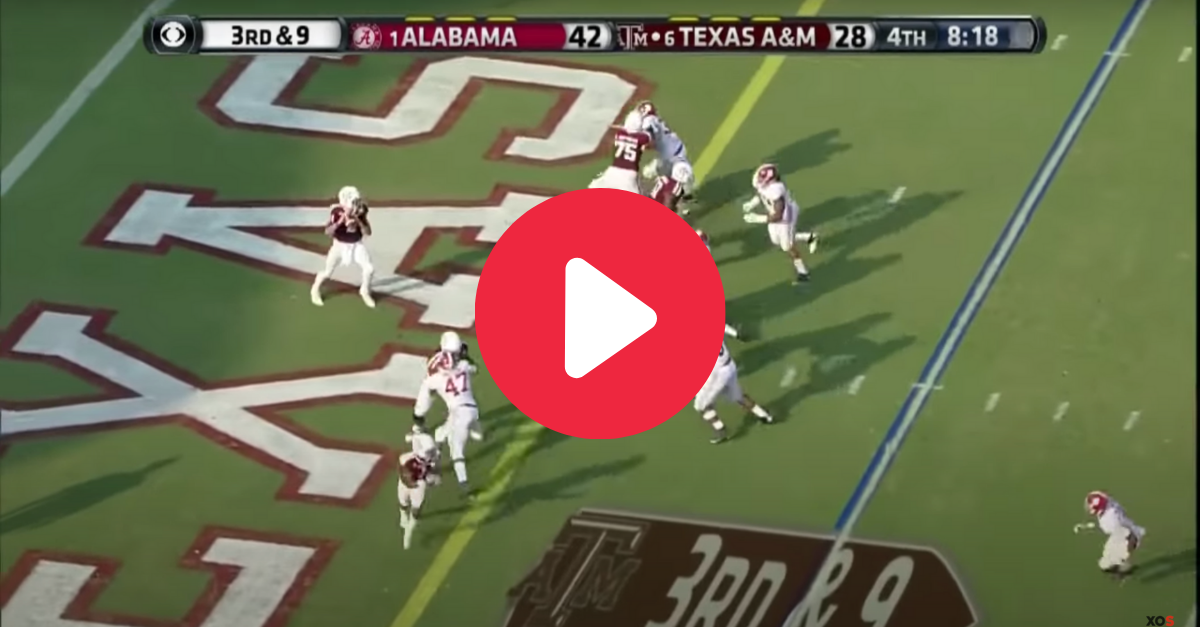 Texas A&M fans don’t need to be told Johnny Manziel was a magician. From the moment he scored his first touchdown against Florida in College Station to orchestrating an 18-point comeback against the Duke Blue Devils in his final game as an Aggie, Johnny Football was just flat-out special.

Manziel’s legend really grew the day he upset and dismantled the Alabama Crimson Tide in Tuscaloosa as a freshman in 2012. Despite spending two years in the TAMU uniform, Manziel made Alabama-Texas A&M games absolute appointment TV for SEC and college football fans. SB Nation even dubbed it the “Game of the Century of the Year” for the sheer talent and drama that came along with it.

In 2013, he nearly rolled the Tide when Nick Saban’s top-ranked team came to College Station to take on the No. 6 Aggies. Lost in the final score are a few of the plays Manziel made that day. His unthinkable Houdini scramble dropped jaws. One of the more incredible plays, however, came when Manziel linked up with Mike Evans and nearly came back against Alabama at Kyle Field.

The Aggies quickly went up 14-0 that day thanks to a Manziel touchdown to Cameron Clear and a Ben Malena rushing score. The beast that is the Crimson Tide eventually woke up and scored 35 unanswered points on the backs of A.J. McCarron’s three touchdowns, T.J. Yeldon’s rushing touchdown and a Vinnie Sunseri interception return touchdown off Manziel to begin the second half on CBS.

Through three and a half quarters, things looked bleak for Texas A&M.

TAMU trailing 42-28 with about eight minutes left in the fourth quarter when the Heisman Trophy-winning quarterback took the snap on third-and-9 from his own five-yard line. He dropped back into the endzone and uncorked a pass over his linemen 45 yards in the air to 6-foot-5 All-American wide receiver Mike Evans.

?Evans turned on the burners like never before. He stiff-armed Cyrus Jones then outran Sunseri and strutted right into the end zone.

Officially, 95 yards. It’s not the longest play ever scored against Alabama — Auburn’s Kick Six would like a word! — but it’s damn sure close. And that’s no easy task considering the Southeastern Conference powerhouse consistently stocks its defensive line and backfield with five-star athletes.

In that moment, the one-time, three-star quarterback got the best of them.

“He’s the magic man,” one announcer said of Manziel after the play.

Manziel’s 95-yard touchdown was indeed a lot like pulling a rabbit out of a hat. Kevin Sumlin’s Aggies were then down just seven points and needed a couple stops on defense to give them a chance. Upsetmania wasn’t in the cards that day, however.

Alabama scored again. Manziel threw another touchdown pass to Malcome Kennedy with two minutes left. Time ran out before Johnny Football could reach into his bag for another trick and Alabama won, 49-42. Manziel threw for 464 yards and five touchdowns.

Manziel and Evans went to have very different career paths in the NFL, but Aggie fans will never forget the time two all-time program legends linked up and nearly came back against NCAA juggernaut Alabama.