It's no secret college football runs through the SEC. I mean, it does mean more after all, but the track record speaks for itself. The conference has won 13 national championships since 2000 with Nick Saban and Alabama claiming six of those. LSU, Georgia and Florida have hoisted the trophy, too.

But football is the lifeblood even for the other members who haven't won a national title. That is, except for Vanderbilt.

Vanderbilt is the Harvard of The South. The encyclopedia of Nashville. The school you forget has a football team.

Here's a stat for you: the Commodores have made nine bowl games in their 118-year history. Nine. I'm convinced Cornelius Vanderbilt approved a bargain for railroad supplies in exchange for his school's football team sucking for eternity. I can only tip my cap to a program that's been this bad for this long.

But it still begs the question: does Vanderbilt deserve a football team at all? 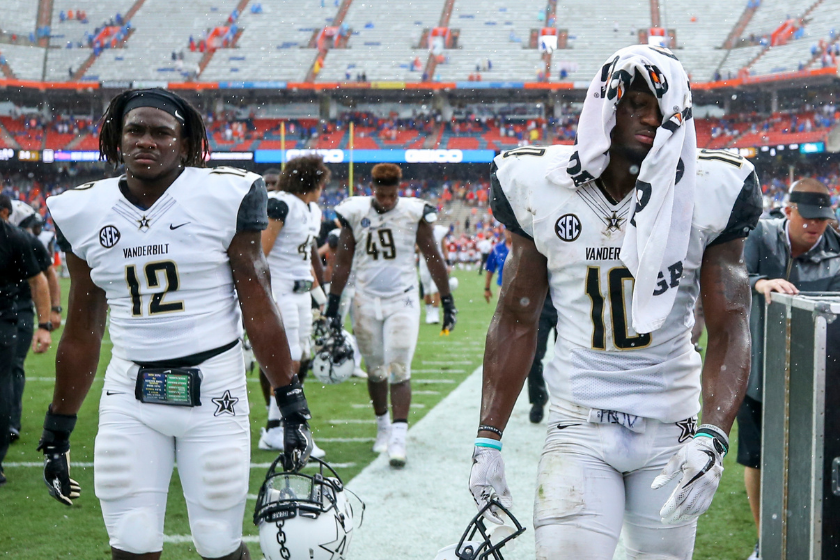 RELATED: The Mystery Behind Kansas Football's Unexpected 12-1 Season in 2007

It's blasphemy for an SEC school, let alone a major university like Vanderbilt, to not have a football team. But, Vanderbilt makes a case. I mentioned the nine bowl games in 118 years but here are some more stats that make you realize Vanderbilt football is in a league of its own.

-- Vanderbilt last won a conference title in 1923 when they were members of the Southern Conference.

-- Vanderbilt's .469 all-time win percentage is the worst in the SEC and sixth-worst of Power 5 programs.

Shockingly, Vanderbilt's track record on the field hasn't put butts in seats either. Last season, the Commodores averaged 23,467 fans in their seven home games at Vanderbilt Stadium. So, with Vanderbilt Stadium's capacity of 40,550, only about 58% of the seats were filled. They've consistently ranked last among SEC attendance, and it's become a running joke among opponents. But one Vanderbilt fan did provide the funniest moment of last season when he started an overrated chant when the Commodores held Georgia to a field goal to go up 55-0. That counts for something, and that guy is my hero.

Anyway, the product on the field hasn't been great, the fans struggle to get behind the program. Would it be in the financial interest of the university to nix the team? Vanderbilt is a private university, so they don't have to disclose their financial records, but I'm having a hard time believing a team that barely fills half their stadium is churning out a profit. I'm only half-joking, however, as someone who has the dream to help prestigious universities save millions, it's definitely an option. To their credit, Vanderbilt is at least making an effort to boost their athletics with the $300 million campaign they launched last year.

So, does Vanderbilt deserve a team? To me, the answer is yes because it's captivating to watch this program exist. Plus, I think each and every one of the dozen Vanderbilt football fans deserve something to cheer for. That being said, I feel SEC opponents would be more upset if the program was cut than Vanderbilt. Without the Commodores, they would be losing an essentially guaranteed win.

Other Power 5 programs with ugly histories like Iowa State and Northwestern have turned things around because they found great head coaches in Matt Campbell and Pat Fitzgerald, respectively. Franklin looked to be that guy for Vanderbilt, but the greener pastures of State College, Pennsylvania came calling. It's not out of the question for Vanderbilt to find their guy and be relevant, but winning in the SEC is hard enough. At a school like Vanderbilt where academics are king, there's another steep mountain to climb, too.