If there's one thing anyone knows about the 12th Man, it's that they never quit. When times are tough and they face conditions that aren't desirable, they'll do anything for Texas A&M.

From camping out days before the 2021 Alabama game to pulling tickets to the 2022 season opener against Sam Houston, which was delayed for just short of three hours due to lightning and rain in the area, most people took shelter within the stadium or simply left the game completely. However, the realest, die-hard fans suited up for the weather and kept the Spirit of Aggieland alive.

The forecast wasn't looking too good during halftime. Looking out of the press box window to the south, I won't lie to you, it looked ugly. Things were going normal until the jumbotron flashed with a message: "Game suspended."

The storm south of the stadium was producing lightning close enough to the area that the game couldn't continue in the second half. Shortly after the delay was announced, it started pouring on Kyle Field -- and when I say pouring, I mean the worst downpour I've seen in a while. While most people took shelter under the press box or inside the stadium, a few people found joy in the rain.

Before long, a duo of two Aggies began imitating the famous Yell Leaders by leading yells. It took a while for people to notice, but once they did, the energy was infectious. There couldn't have been more than a few hundred people, but from the noise I heard in the virtually soundproof press box, you could've fooled me. 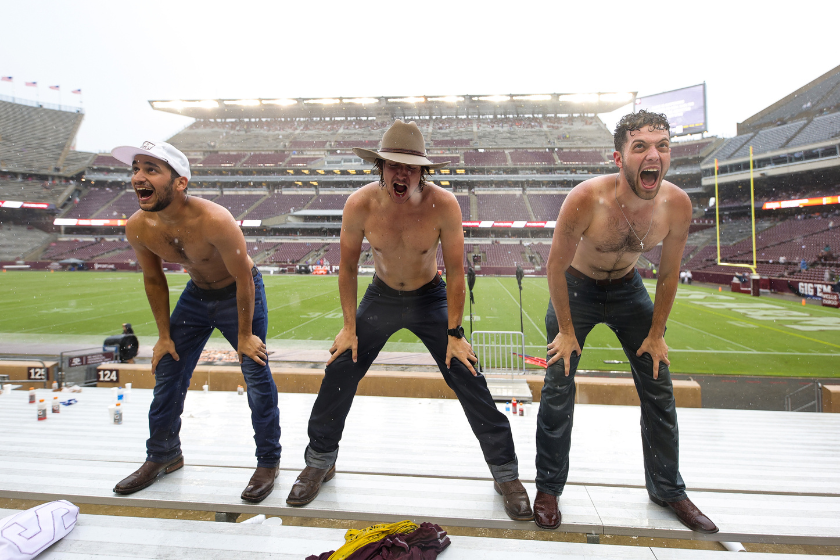 RELATED: 5 Players That Will Take Texas A&M to the Playoff in 2022

Most people by now would probably be asking "What kind of person stands in the pouring rain yelling at other people to try to get them to yell with them?" I'll tell you what kind of person. Someone who takes a bad, boring, discouraging situation and turns it into a positive one. Someone who embodies the Aggie Spirit and Core Values of Loyalty, Leadership and Selfless Service.

While those two guys might have just been goofing around, they struck me in a special kind of way this Saturday. I witnessed firsthand what Aggieland is all about. When these people chanted, they weren't just yelling to pass the time, they were showing this football team that no matter what conditions are going on outside and no matter how bleak it may look, they'll always be there for them.

After a couple yells, the two men started leading one of my favorite Aggie traditions: the Aggie War Hymn. Like I keep saying, there weren't many people still left in the stands, but as soon as they started singing, the ones who were left rushed to the edge and gathered together to start swaying together. As more people left the comfort and dryness of the shelter beneath the press box, more joined in.

This is what I mean when I say that the Spirit of Aggieland is contagious. Surprisingly enough, I saw a couple orange shirts of Sam Houston fans even trying to join in. It doesn't matter who you root for, seeing that kind of school spirit is so uplifting that you almost feel obligated to join in.

Eventually, the Yell Leaders did come out to lead some official yells with the fans still out in the stands, but for me personally, the two students who originally led it made much more of an impact.

While the Aggies did go on to defeat Sam Houston 31-0 after the three hour delay, it wasn't the win or the rain on the way back to my car that sent me back home with chills. It was the camaraderie between these Aggies and the Spirit of Aggieland I will never forget.