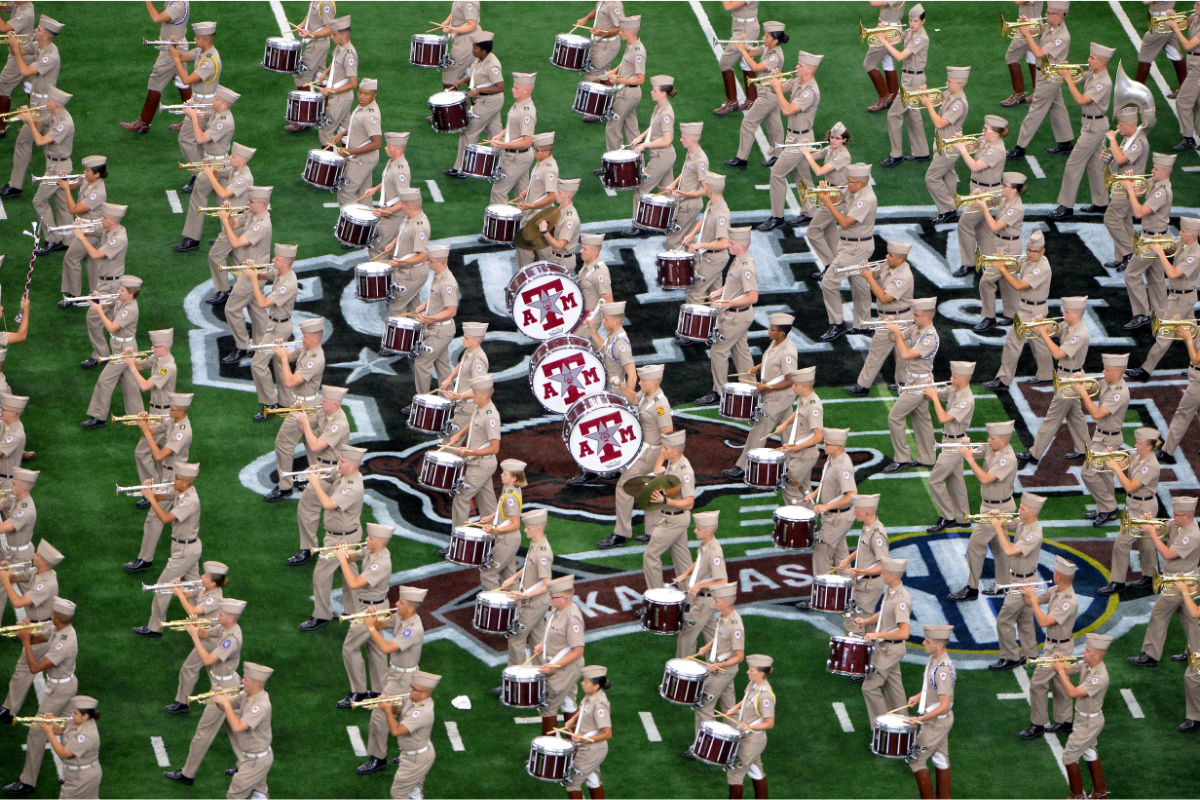 Texas A&M University is more than just Jimbo Fisher‘s football team or the house that Johnny Football built. It’s where Sirr Parker became a legend in the 1998 Big 12 Championship Game and where the Aggies once didn’t surrender a single point all season 100 years ago.

TAMU is more than just football and game days, though. The traditions and campus landmarks are endless in College Station. Mascot-stealing, Kyle Field, the Midnight Yell and the school’s bonfire memorial are all just a few reasons why we love the Home of the 12th Man.

What some don’t know is that Texas A&M was once an all-male school with deep military roots. It opened in 1876 near Bryan, Texas, as the Agricultural and Mechanical College of Texas (Texas A.M.C.) and, until 1965, every student had to enroll in the Aggie Corps of Cadets.

It should come as no surprise then that Texas A&M is also home to the largest military marching band in the United States. Every Saturday, the Fightin’ Texas Aggie Band, made up of 400-plus members of the Texas A&M Corps of Cadets, takes the field for a halftime performance during home football games for an awesome combination of sights and sounds.

The announcer yells to the crowd inside Kyle Field, “Ladies and gentlemen, now forming at the north end of Kyle Field, the nationally famous Fightin’ Texas Aggie Band.” Then, an impressive display of complex maneuvers and timed movements take place in the halftime show:

The A&M band performs at every home game in College Station and several away games, making it one of the most traveled collegiate marching bands in the NCAA.

In addition to sometimes performing in inaugural parades for U.S. Presidents and Texas governors, it also performs at university and Corps functions throughout the school year.

In 2001, the John Philip Sousa Foundation awarded it the Louis Sudler Trophy for collegiate marching bands. The band was also personally requested by President George W. Bush for his inauguration parade.

Among the numbers you’ll hear the band play are “The Aggie War Hymn,” the school’s fight song; “The Spirit of Aggieland,” its alma mater; “Noble Men of Kyle,” the group’s signature march; “The Ballad of the Green Berets;” and “Stars and Stripes Forever.” And one of the best parts about the Fightin’ Texas Aggie Band halftime drill is the block T they form.

Not just anyone is allowed to march in this prestigious band.

To join the Fightin’ Texas Aggie Band, one must have played and marched in a band in high school. Prospective band members must pass an audition with one of the band’s associate directors — Dr. Timothy Rhea (director of bands and head of music activities), LT Russell Tipton or Dr. Lance Sample. None of the members of the Aggie band are music majors because the school doesn’t offer it as a major.

TAMU’s band first began all the way back in 1894. Since then, members of the band have slept and eaten together in the same dorms. Aggie Band members treat the band like a full-time job, sometimes practicing as much as 40 hours per week.

History Behind the Texas A&M Band

Its existence is credited to Joseph Holick. In 1885, Holick and his brother Louis boarded a box car bound for Orange, Texas, where they hoped to work at a lumber mill. They stopped in Bryan and chose to stay there, where Holick worked at a boot shop. Lawrence Sullivan Ross, then the president of the school, asked Holick to make boots for his cadets on campus instead of in Bryan.

Not long after, Holick’s musical abilities were unmasked. The Commandment’s staff paid him $65 each month to play the bugle at Corps functions, in which he played two military tunes, “Reveille” and “Taps.” Holick asked if he could start a cadet band and he was named its first bandmaster. In 1894, the band was comprised of 13 members but expanded to 75 by 1924.

Why Is It Called The Fightin’ Texas Aggie Band?

The band’s name — The Fightin’ Texas Aggie Band — has a pretty literal history behind it. Early drum majors were chosen based off a gladiator-style fight in a locked room. The best fighter would be named the band’s drum major and thus the “Fightin'” part of the name as added to the Texas Aggie Band.

Most people just call it the Aggie Band or the Noble Men of Kyle, which sounds a lot cooler anyway. But the next time you’re thinking about going to grab another beer or box of popcorn during halftime at an Aggies game, maybe reconsider and stay seated for the Fightin’ Texas Aggie Band.

It’s not every day you get to witness the largest military marching band in the country.