Put your thinking cap on and try coming up with the current active college football coaches to have won a national championship. Go ahead, there are only five.

Alabama's Nick Saban, LSU's Ed Orgeron (he'll be off this list after this season), and Clemson's Dabo Swinney are no-brainers. North Carolina's Mack Brown is the one you have to dig deep to recall. But don't forget about Texas A&M head coach Jimbo Fisher, who is being paid handsomely to hopefully lead the Aggies to a national title.

Fisher has already generated a lot of excitement surrounding TAMU's football program, and each recruiting class full of five-stars only adds to that.

Texas A&M handed Fisher a massive amount of money to leave the ACC and lead their program following his successful stint in charge of the Florida State University Seminoles. By the time his 10-year contract in College Station is over, he'll have constructed quite the fortune since his days as LSU's offensive coordinator under Saban.

How has that Jimbo Fisher net worth been accumulated? Let's take a look at his career. 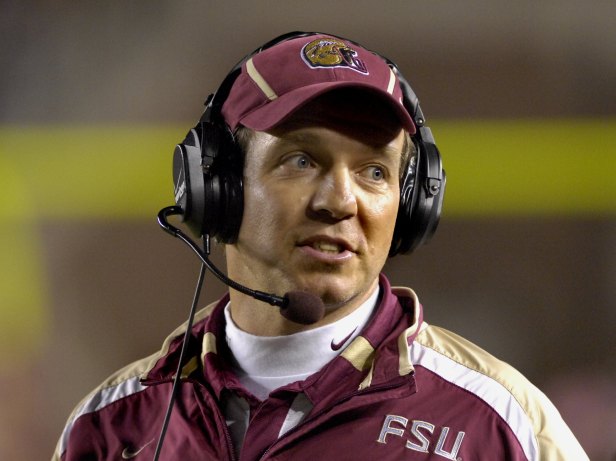 RELATED: Where Did Jimbo Fisher's Nickname Come From?

Born in Clarksburg, West Virginia, Fisher starred at quarterback as a football player in high school and for nearby Salem College under head coach Terry Bowden (FSU legend Bobby Bowden's son), and followed him to Alabama's Samford University.

He became the NCAA Division III National Player of the Year as a senior in 1987. He played his only professional football in 1988 for the Chicago Bruisers of the Arena Football League.

Fisher was making peanuts when he first began his coaching career at Samford University in 1988. By 1993, he became the quarterbacks coach at Auburn University, where he was pulling in a minuscule $72,000.

Fisher spent a season at Cincinnati in 1999 before heading for Louisiana State University to be LSU's offensive coordinator until 2006. He held the same assistant coach position at FSU until 2009.

As Business Insider notes, his salary as FSU's offensive coordinator peaked at $630,000.

In his first season as head coach of the Florida State Seminoles, he made $1.6 million. His annual income rose every year and he likely made more than $30 million over his eight-year tenure there.

Fisher's earnings were, of course, well deserved. He led the 'Noles to a BCS National Championship win in 2013 and posted the best winning percentage ever at Florida State, ahead of the legendary Bobby Bowden.

In 2016, he signed an extension that would've kept him in Tallahassee through the 2024 season and paid him $5.5 million annually, though that thought was obviously short-lived.

This news came after Fisher and his ex-wife, Candi Fisher, announced they were getting a divorce. They have two sons together: Trey and Ethan. Ethan has a rare genetic disease called Fanconi anemia, which Fisher has raised awareness about. 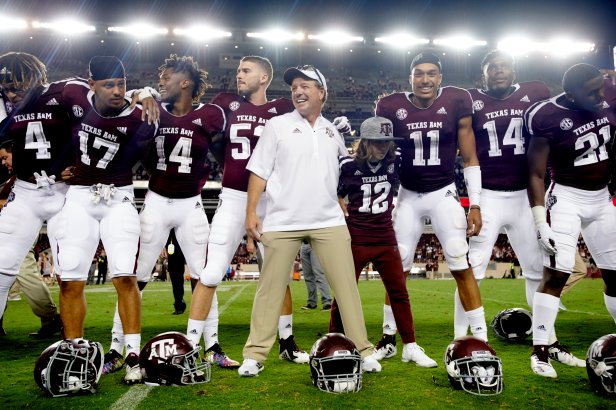 Jimbo Fisher signed a monster 10-year, $75 million contract in 2018 to lead the Aggies and beyond after he was introduced as Kevin Sumlin's successor in December 2017.

The Houston Chronicle published a copy of Fisher's current contract, and as SBNation notes, the deal is fully guaranteed. If another school wanted to hire him away from College Station, that school would owe TAMU zero dollars. Texas A&M, for example, owed Florida State $5 million when they hired him away.

Fisher's base salary was listed as $500,000 plus what was called a supplemental income of $7 million in 2018. The contract also contains bonuses that can bump that annual income by $1.35 million. It also comes with the use of two luxury vehicles and a country club membership.

Fisher's $7.5 million salary in 2018 ranked as the fourth-highest in college football behind Alabama's Nick Saban, Ohio State's Urban Meyer and Michigan's Jim Harbaugh. He was the SEC's second-highest paid coach at the time.

Fisher's bonus opportunities are as followed.

That means he earned close to $8 million in his first year at TAMU alone, and he did it again in 2019.

Texas A&M gave Fisher an extension in 2021, paying him $95 million over 10 years, which was about a 25 percent increase from his former contract. According to CBS reporter Barrett Sallee, he'll earn $9 million in 2022 and $9.15 million in 2023. That figure makes him the second highest-paid coach in college football behind Saban. Between the some $30 million he made at Florida State and the $95 million Fisher is set to earn at Texas A&M, it's safe to say Fisher should have enough money to play golf every day when he eventually retires.

That being said, Celebrity Net Worth estimated Fisher's net worth to be $13 million. That number is sure to rise year after year as the coach rakes in the cash in Aggieland.

So, is Jimbo Fisher worth what he's being paid? That depends who you ask. But considering there aren't a whole lot of current coaches with national championships on their resumes, I'd say it's pretty fair.