Do you remember those anti-drug PSAs that used to run in the 1980s? No? For those of you too young to know what I'm talking about, here's a sneak peek.

You see - they say that imitation is the sincerest form of flattery, and college athletes looking up to their professional heroes seem to be no different.

Whether it's scoring a touchdown in the NFL or creating a turnover in college football, the exhilaration and excitement generated by the "big play" has become big-time entertainment. In the NFL you'll recall Terrell Owens' Sharpie stunt on a Monday Night broadcast in 2002. That was followed the next season by New Orleans Saints wide receiver Joe Horn and his hidden cell phone. Well, NCAA teams have taken the sideline prop to a whole new level.

The UNLV Slot Machine is Amazing

UNLV put a giant slot machine on the sideline ?pic.twitter.com/NssuK3ZHkO

The "Red Roller" as it's called, is a slot machine. In Las Vegas, Nevada? No way. Players who scored a touchdown or created a turnover would tug on as their teammates gathered around to celebrate. The first player to have the privilege was Charles Williams. The Rebels running back took the football to the house on a 75-yard touchdown run early in the game. Unfortunately for UNLV, 2021 wasn't their greatest football season on record. They would finish the year with a 2-10 overall record, finishing 2-6 in the Mountain West.

While it wasn't necessarily the first, perhaps the most well-known of these sideline traditions is the "turnover chain" that was recently retired by the University of Miami. Since then, college football programs all over the country have showcased their own traditions and gimmicks - some better than others. There are all sorts of items, ranging from trashcans to beads, backpacks to chalices, thrones, and planks. Last year, UNLV football debuted its sideline slot machine in Allegiant Stadium during the CBS Sports broadcast of their home game against Utah State. 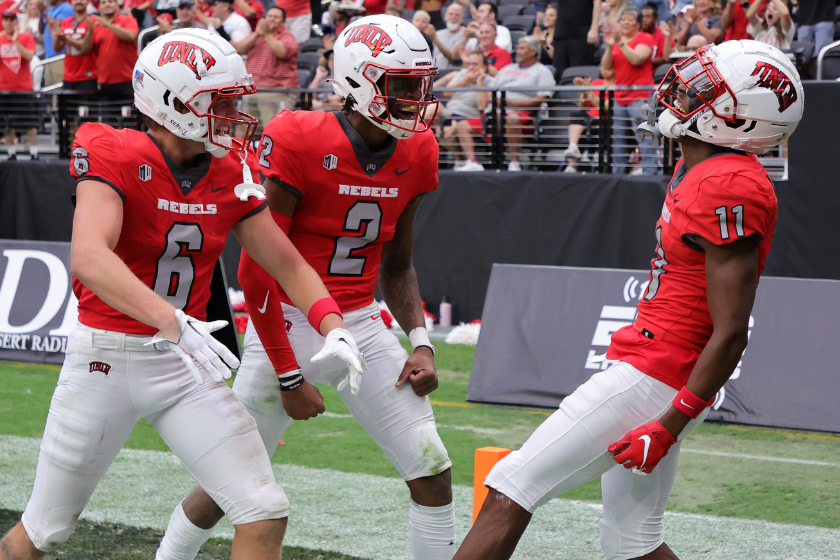 Their 2022 season kicked off in Week Zero, and it's already trending in a better direction. The team didn't waste any time breaking in the one-armed bandit. Head coach Marcus Arroyo is hoping that it's a sign that things are looking up as they work to improve on last year's record.

MORE: Why Miami's Pricy, Hilarious Turnover Chain Was Discontinued in 2022