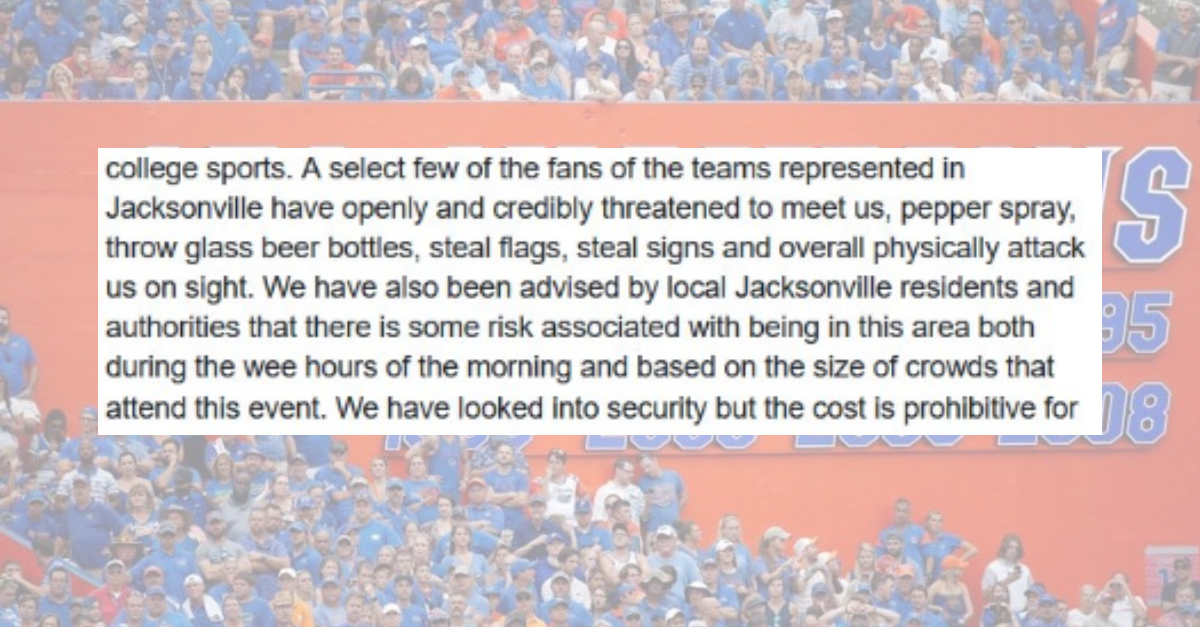 UCF fans are an interesting bunch. If you?ve ever logged into Twitter and follow college football, you?ve probably seen one arguing the Knights should be higher in the polls. They are, somewhat understandably, unhappy they missed out on a College Football Playoff berth last year despite going undefeated. UCF also doesn?t play any teams of importance. Regardless, fans feel they?re not getting the national respect and recognition they feel they deserve. They want to be seen. And heard.

So one UCF fan group decided to put together an event for this weekend?s Florida-Georgia game in Jacksonville. The idea was to load up in buses and ?invade? ESPN?s College GameDay set Saturday morning to support their team. They didn?t even plan on staying for the game. That all seems perfectly fine and harmless, right? Apparently it didn?t sit well with Gator and Bulldog fans on Twitter?

According to this Facebook event UCF fans are planning an "epic" takeover of College GameDay.

These are just some of the tweets. There were people in our groups finding out where we were going to be while others were planning on doing things on our way back to the buses. We had kids and some older folks in our group. We couldn't risk them getting hit with a glass bottle. pic.twitter.com/J5jqsVM5KJ

Yikes. This is not a good look for Florida and Georgia fans, though it obviously shouldn’t reflect any fan base as a whole. The worst part of that statement: “A select few of the fans of the teams represented in Jacksonville have openly and credibly threatened to meet us, pepper spray, throw glass beer bottles, steal flags, steal signs and overall physically attack us on sight.”

It’s unclear just how credible these threats were. People say similar things all the time to other fan bases on Twitter, but that certainly doesn’t make it OK. But considering this is the “World’s Largest Outdoor Cocktail Party” and mixing alcohol and team hatred sounds like terrible idea, maybe this is the right move.

Here’s to hoping one day all fan bases can just all get along. Shoot, maybe Florida will play UCF in a bowl game at the end of the year and settle any disagreements on the field.

As for the matchup between the No. 9 Gators and No. 7 Bulldogs, it figures to be their biggest showdown in a decade. The last time both teams were ranked inside the top 10 was in 2008. The winner likely will head to Atlanta for the SEC Championship Game. The rivalry may not be as heated as it was in the Urban Meyer-Mark Richt days, but don’t be surprised if tempers flare at some point.