One thousand swings per day.

That's what it takes to become the greatest home run hitter the college softball world has ever seen. By now, everyone knows just how good Jocelyn Alo is when she steps on the diamond for the Oklahoma Sooners.

The human energy plant has been supplying power in Norman since the day she stepped foot on campus back in her 2018 season. Since then, all she's done is win a national championship, take home the 2021 USA Softball Collegiate Player of the Year and break the NCAA all-time career home run record -- one that she continues to make tougher to break with each blast in the Women's College World Series.

Alo's 120 home runs and counting wouldn't have been possible had it not been for her parents, namely her father, Levi Alo. The two have a special bond as he made endless sacrifices for her to help her become a superstar.

That's where she and Levi would take 1,000 swings a day together. They broke it up into two 500-swing sessions (hey, a girl can get tired). Jocelyn told KHON2 that's when her dad began to notice her potential.

In fact, Levi was so committed to Jocelyn's softball career that he would save up $10,000 to rent out an apartment in California so she could play better competition. She got that when she played for the So Cal Pumas and Batbusters travel teams at 13 and 14 years old, respectively.

"To tell you the truth, I don't know how I did it," Levi told Holly Rowe in an mid-game interview. "We made it happen. We don't have a lot of money by any means. We make it happen. It was a great sacrifice for us. She's reaping the benefits and it's been a fun ride. I wouldn't do it any other way."

Levi Alo talks to @sportsiren about @78jocelyn_alo's upbringing and how she's giving back to her community.

Jocelyn's family -- which includes father Levi, mother Andrea and three sisters, Sabrina, Lorraine and Sophia -- moved to Kaneohe when she was 7 or 8. They still live there, but they've become her biggest fans in Norman and Oklahoma City, where Jocelyn has powered the Sooners to the 2022 WCWS Final against the rival Texas Longhorns. You can find them all wearing shirts with Jocelyn's face on them, thanks to her NIL deal with the school.

Jocelyn's relationship with her dad is a two-way street, because she's also his biggest fan.

She Wears His College Football Number at Oklahoma 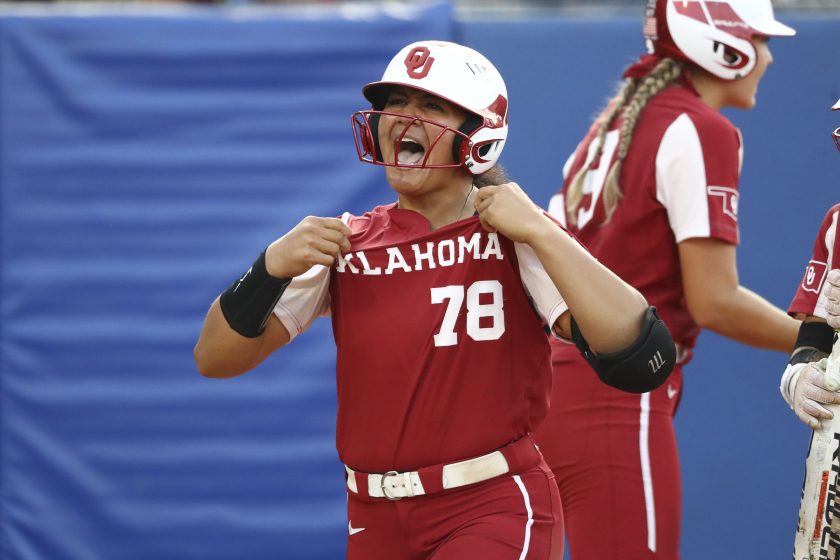 RELATED: Beth Mowins: The Voice of the WCWS Who's Helping Grow Softball

Levi is a big dude, and it should surprise nobody that he played college football at Laney College in Oakland, California, where he met Andrea, who was a softball player.

He introduced Jocelyn to a number of sports, the first of which was wrestling. She was so good at it -- and so strong -- that she became a state champion at Campbell High School.

When she chose the University of Oklahoma over California and Oregon, she needed to pick a number. She chose to don the No. 78 on her back, the same one Levi wore when he played offensive lineman in college.

"It's always been my dad's number and I proudly wear 78 and now girls around the world wear 78 so I just find that a little crazy," Jocelyn told KHON2. "Who wants to wear an O-line number, you know?"

She's right. Little girls across the country are wearing her number. They're emulating her swing in hopes of being the next Jocelyn Alo. But it takes a dad or a coach or a family member to put in the work alongside the athlete to make that happen. Jocelyn Alo wasn't created overnight. It was a long, time-consuming, sweat-filled journey, one that was spent mostly with her dad.

"We've literally been through everything together," Jocelyn Alo told KHON2. "He's my best friend and I seriously wouldn't have it any other way."

The moment that captured that all? When she won a national championship over Florida State last year. Jocelyn couldn't help but tear up when she hugged her dad.

"I starting crying and I was just like, 'We did it, Dad,'" Jocelyn said. "It was just a really cool moment for us to have and he's been with me through a lot of stuff so just to finally have that 'on top' moment was awesome."

Jocelyn isn't finished just yet. She can add another ring to her resume before likely playing professional softball. She might just be the star pro softball needs to catapult it.

MORE: Jocelyn Alo, College Softball's Home Run Queen, is So Scary Nobody Pitches to Her