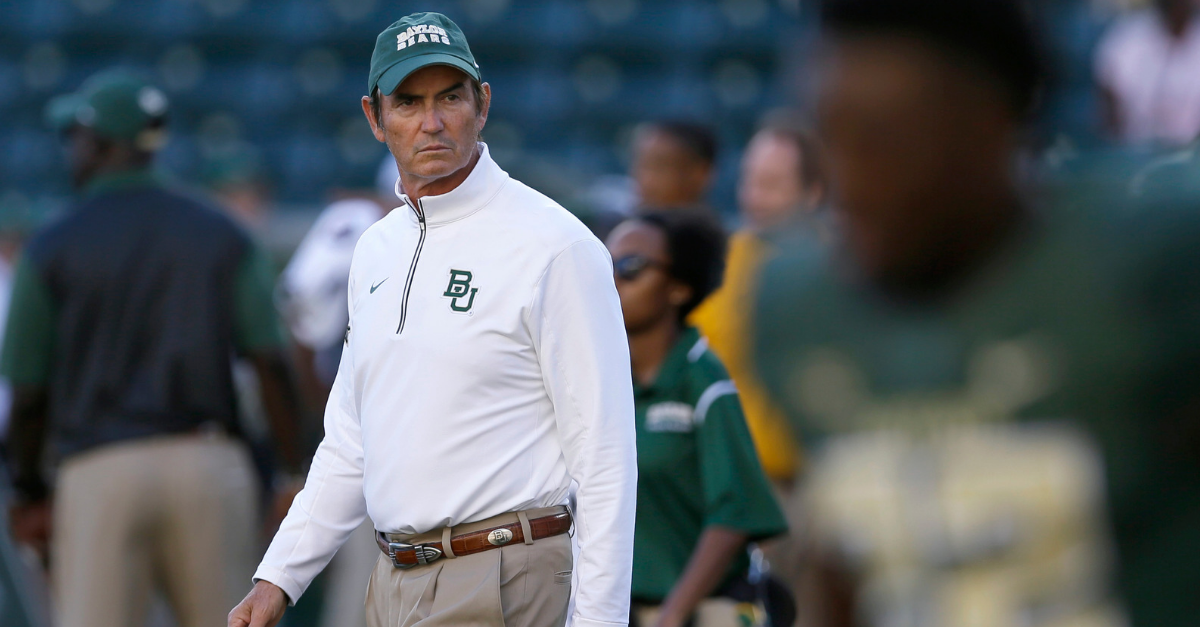 In case you need a stern reminder, former Baylor Bears head coach Art Briles is a disgrace to the game a football, a man who basically sold his soul to win a few college games. There are countless examples of people who deserve a second chance after doing something wrong, but the now-63-year-old Briles does not fit that criteria. Yet, somehow, he has landed a job back in the United States.

It?s been three years since Briles was fired from Baylor following a sexual assault scandal in Waco, Texas, which also saw the university?s president and athletic director fired. A 2017 lawsuit claimed that at least 31 football players committed at least 52 rapes between 2011 and 2014.

Then, after coaching Estra Guelfi Firenze in Italy last year, Briles was hired in June to be the high school football coach at Mount Vernon High School in East Texas. According to KWTX, the Mount Vernon school board unanimously approved the hire, and Briles signed a two-year contract worth $82,000.

It?s not the big money you see many top Texas high school coaches make, but this has nothing to do with the contract and everything to do with the fact that a man who once turned a blind eye to sexual assault at a private Christian university gets another chance to coach America?s youth.

This is Art Briles on Skype via Facebook meeting with Mt. Vernon for the first time. Listen to the cheers from the people in the room https://t.co/mV48OUPrx1 pic.twitter.com/6qeKhQZFHB

RELATED: It Pays to Coach High School Football in Texas. Like, Really Pays.

To say this is a massive risk is an understatement. In no way does Briles have a good reputation, yet the hiring of former Baylor coach Art Briles is something Mount Vernon Independent School District Superintendent Jason McCullough was willing to defend.

?I understand that we?ll be one of the most highly scrutinized districts this coming year. But I also believe that coach Briles is going to earn the trust of our community every day by his actions, by his words, and by his deeds, and our athletes will benefit his time with us.?

Nobody is going to deny Briles? ability to coach football teams at a high level. He showed that in his NCAA college football stops with the Houston Cougars (Conference USA) and Baylor Bears (Big 12) football programs. He even has experience at the high school level during his time as head coach at Hamlin (TX), Georgetown (TX), and Stephenville (TX) from 1984 through 1999.

But when McCullough was asked if he spoke to the victims of the Baylor sexual assault scandal or the NCAA, both answers were simply no.

“We vetted Coach Briles to the best of our ability.”

I asked if they spoke with any of the victims at #Baylor ….. no

Watch the exchange below. pic.twitter.com/QO8o4LwjDi

This is the guy Mt. Vernon wanted to be the head football coach and to lead the lives of young people? Sure, he has plenty of football experience, but accepting Briles? past isn?t worth potential state championships.

Art Briles doesn?t deserve a second chance to coach American football, and definitely not at the high school level, but he got it and it’s already a mess.

According to The Dallas Morning News, Mount Vernon will possibly have to forfeit up to five games after a district executive committee unanimously rule that two players were ineligible. It reversed a decision last month that upheld the player’s eligibility.

Brock Nellor and Cameron Nellor are the players in question. According to the paper, they were rule to have moved into the district for athletic purposes. Naturally, the school, including Briles, received a public reprimand, but they were not forced to forfeit any games at the time.

“It’s our understanding that the punishment handed down by the DEC today does not include the forfeiture of previous games,” Mount Vernon ISD Superintendent Jason McCullough told The Dallas Morning News.

Additionally, Briles was publicly reprimanded for using an assistant coach who wasn’t a full-time employee of the district.

The situation is tricky. The committee might make the Mount Vernon Tigers forfeit games because of the ruling, while Mount Vernon officials believe the previous ruling made them eligible.

At the end of the day, and while all of this sounds pretty petty with technicalities, the fact that football coach Art Briles has his team in trouble again since returning to the sidelines is a joke on everybody.

Then again, what else did you expect?

This story was originally published on June 6, 2019. It was updated with information on Mount Vernon’s potential forfeiture for player ineligibility.