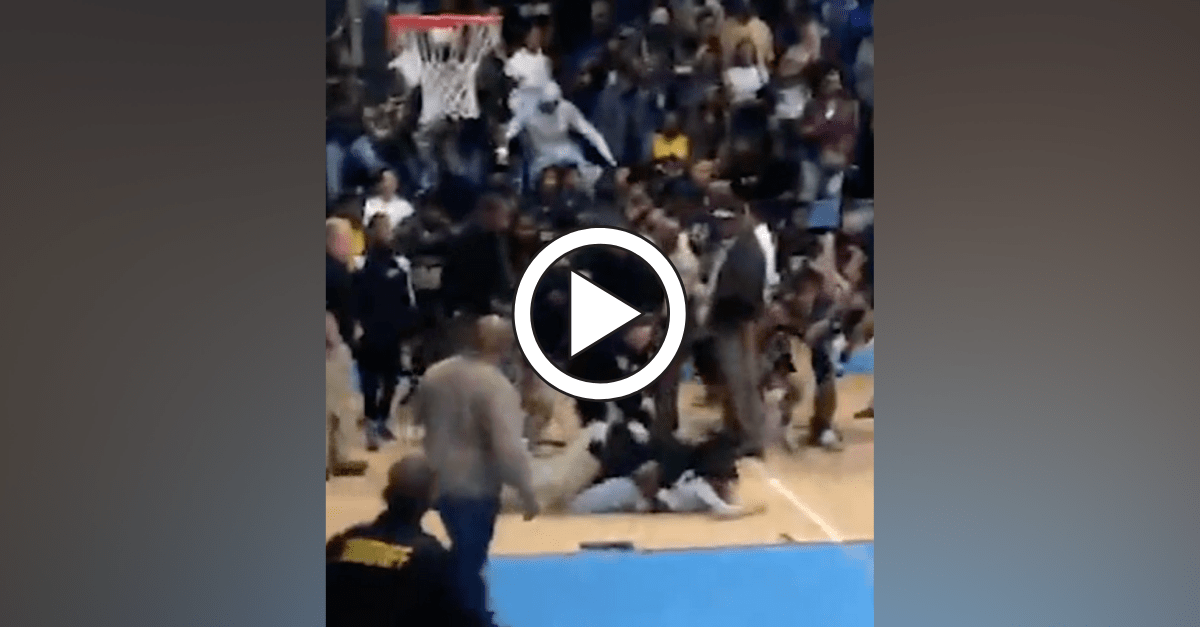 High school sports games are about as predictable as the local weather forecast. You never know when a shooting will break out at a basketball game, fireworks are going to explode over a football field or a basketball coach’s own players are going to jump him after a game.

However, that’s part of what makes high school athletics fun. You never know what you’re going to get when you walk through the doors of a tiny basketball gym or pack the bleachers under the lights for some Friday night football.

Fans at one North Carolina high school basketball game were in for their own treat when a fight in the stands turned into an all-out brawl that required the use of pepper spray to calm things down.

Police even wielded tasers during the altercation.

South Granville led Reidsville 72-66 with less than 20 second left in the game. According to WTVD, that’s when a South Granville fan and alumni grabbed a sign during a timeout and ran in front of Reidsville fans, one of which who attacked the fan.

Video from the stands posted to social media shows the attack and the aftermath of it, during which police use pepper spray and threaten to use tasers. Several fans were escorted out of the gym.

“Somebody got maced over there,” the videographer says. Players can also be seen covering their eyes in the video featuring NSFW language.

The fan initially attacked, 20-year-old Tyrell Thorpe, told WTVD that a police officer tried to grab him while holding the South Granville Vikings sign and didn’t understand why a Rams fan jumped in to attack him.

“He had a sign that he received from one of the school teachers, because the school was in the process of winning,” Bronzella Mallory, Thorpe’s mother told WTVD. “And he was pulled by a law enforcement, which caught him off balance. And when he turned around, one of the coaches grabbed him and pushed him, and he fell into the crowd of Reidsville High School students, and they all jumped him.”

Thankfully, it didn’t appear anyone was seriously injured despite maybe some nasty eye pain from the pepper spray.

Officials suspended the game and teams agreed to play the final 19.1 seconds in a closed gym without fans on Thursday night. South Granville won the game, 72-69, to advance to the regional championship.

The good news: Both teams didn’t let the fight affect their friendships. They even battled in a friendly dunk contest after the game!

And then a friendly dunk contest ensued 👍🏼 pic.twitter.com/ZlM6cPM21F

Remarkably, South Granville High School made local news with another wild fight that took place in 2015. The school’s principal was punched in that one.

Last year, pepper spray was also used when a fight broke out at a Sacramento high school girls basketball game.

Good grief. Can’t we all just get along?