Randy Moss and “White Chocolate” Balled Out Together in High School 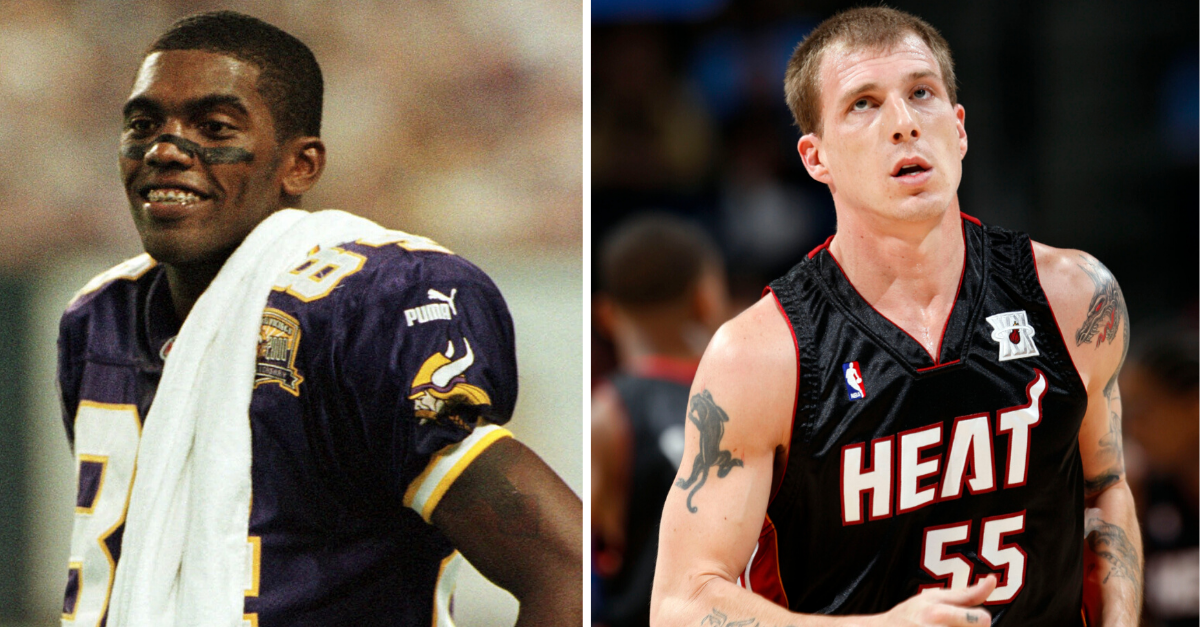 Belle, West Virginia is a small town in the middle of the state. It sits in the heart of coal country with a population of 1,162. It’s a simple, modest place along the Kanawha River.

In the 1990s, the town’s high school ? DuPont ? housed two future pro athletes on the basketball team. One was a prolific wide receiver who went on to become one of the greatest in NFL history. The other was a flashy passer and dazzling point guard who won an NBA championship.

They were Randy Moss and Jason Williams.

Moss and Williams’ chemistry on the court was built long before high school. The first time they met was as football players. In fourth grade, Moss recalls Williams’ quarterback skills after he darted for a touchdown on a bootleg. By eighth grade, Willaims and Moss teamed up. Williams claimed he would throw it as far as he could and knew Moss would catch it.

They brought that link from the gridiron to the basketball court. Williams was still the quarterback and Moss was his favorite receiver. Williams ? nicknamed White Chocolate ? found Moss with behind-the-back passes and on fast breaks. Moss completed the 1-2 punch with high-flying dunks and finishes.

The dynamic duo even have a Nike commercial together.

The electric duo’s playmaking abilities translated to individual and team success. Williams is the only player in school history to record 1,000 points and 500 assists. Moss won the Bill Evans Award ? given to the best high school boys basketball player in West Virginia ? twice in 1994 (co-player of the year) and 1995 as a senior when he averaged 30.2 points and 13.7 rebounds per game.

Williams and Moss led DuPont to the playoffs and state championship game in 1994 but fell to Martinsburg High School, 79-73. The loss marked the last time Moss and Williams played together.

RELATED: Randy Moss? Mic?d Up Video is Worth Every Second

As Randy Moss went on to become a football star, and Jason Williams continued to excel in basketball, their careers share parallels.

Moss wanted to play for Notre Dame but his scholarship was revoked after he was sentenced to jail for a fight. He then turned to Florida State where head coach Bobby Bowden compared him to Seminole legend Deion Sanders, but violated his probation by testing positive for marijuana. He finished his college career at Marshall and finished fourth in the 1997 Heisman Tropohy voting before being selected by the Minnesota Vikings in the first round of the 1998 draft.

Moss’ best season came in 2007 as Tom Brady’s go-to target for the New England Patriots when he broke the record for most touchdown receptions in a season with 23.

On the other hand, Williams started his career at Marshall under Billy Donovan. However, when Donovan left the Thundering Herd in 1996 for the Florida Gators, Williams followed. Williams played just under four months of the 1997-98 season but was dismissed from the team after testing positive for marijuana for a third time in February 1998.

He was selected seventh overall by the Sacramento Kings the following NBA Draft.

The NBA Player wowed with his trademark ball-handling and no-look passes throughout his career with the Kings, Memphis Grizzlies, Miami Heat, and Orlando Magic. The peak of his NBA Career was winning the 2006 NBA Finals as the starting point guard for the Heat.

They retired within months of each other in 2011. Moss would later come out of retirement and play the 2012 regular season with the San Francisco 49ers.

The gym where Moss and Williams played together is gone, but luckily, we have highlights to suffice. They both have a plethora.