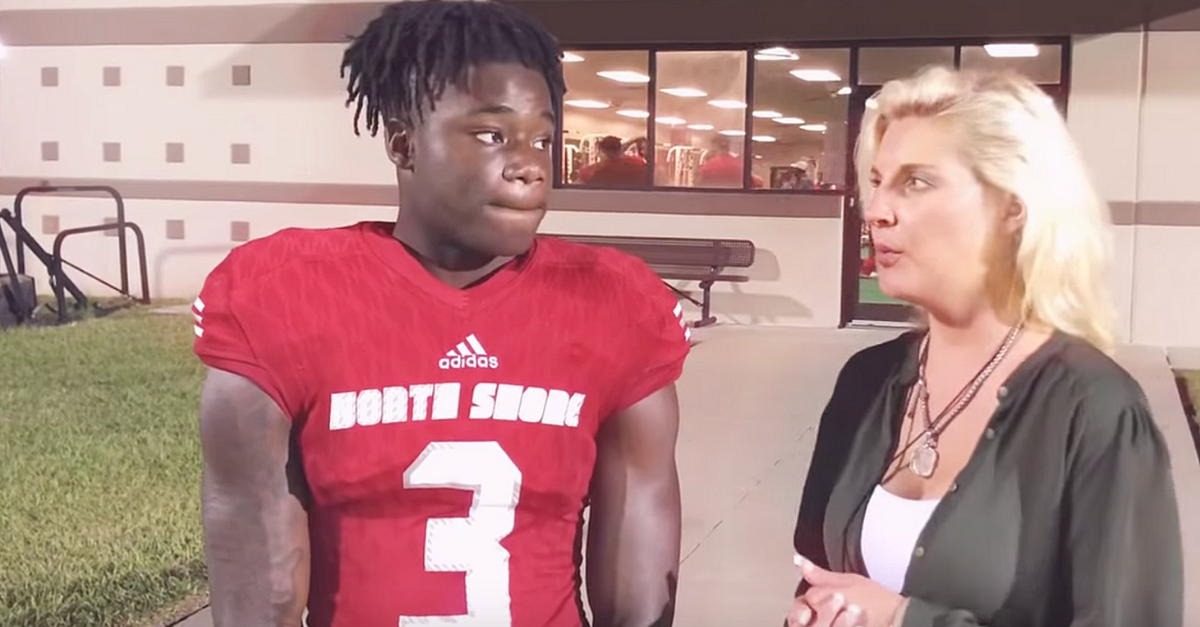 North Shore running back Zachary Evans is the best high school football player to come out of Texas since Myles Garrett (who went No. 1 overall in the 2017 NFL Draft). When talking about running backs, Evans is the highest-rated talent from Texas since some guy named Adrian Peterson. The 200-pound running back has lightning quick feet, breakaway speed, power between the tackles, and is ranked as the No. 2 RB in the country by 247Sports while ESPN ranks him No. 1 overall in the 2020 recruiting class.

When you’re one of the best players in your class, you have the option to attend any college in the country you want. In January, Zachary Evans named his top 11 schools that he’s considering, which isn’t easy when he has at least 44 scholarship offers.

The five-star running back named the following contenders in his top-5 on Twitter, cutting his list down from 11 teams earlier in the year:

Massive college football programs like Auburn, Florida, Michigan, Oklahoma State, Ole Miss, Penn State, Tennessee, Texas A&M, Texas and Washington all made pushes to land the incredibly talented ball carrier, and even places like Alcorn State and Wyoming have taken their shot and sent him offers.

Please watch the very first 20 seconds of this highlight tape, and you’ll understand EXACTLY why everybody wants Zach Evans on their football team.

MaxPreps’ Junior Player of the Year ran for 1,785 yards and 29 scores in 2018, which followed his sophomore campaign running for 1,483 yards and 27 touchdowns on the ground.

As a junior, Evans helped lead his Houston high school to the Texas 6A Division I State Championship ? the school’s second in three years ? with a perfect 16-0 record. Incredibly, North Shore’s offense averaged 53.4 points per game with quarterback Dematrius Davis Jr. under center, who’s the No. 6 dual-threat QB in 2021. Evans might be this team’s biggest name, but Davis’ heroics etched him in high school football history.

Evans squats 605 pounds, runs the 40-yard dash in 4.51 seconds, and has a 34-inch vertical leap. It’s safe to say that whatever team lands this kid is getting a plug-and-play talent that could change the fortune of one team for several years until he makes the jump to the NFL.

UPDATE: North Shore finished the 2019 season with a 16-0 record thanks to its talented roster led by Evans. After beating Katy (TX) and scoring twice in the UIL 6A-D1 Regionals, Evans announced that he’d made his college decision and would be verbally committing a few days later on Wednesday, December 4.

However, Evans confirmed in a text message to 247Sports that he would delay his decision, which was expected to come during the NCAA’s Early Signing Period on December 18.

247Sports believed Georgia was leading LSU as the favorite to land the superstar running back, with Texas A&M beginning to lose ground.

Then, at the Under Armour All-American Game in January, Evans told reporters that he signed with a team during December’s Early Signing Period. 247Sports confirmed that the Georgia Bulldogs did in fact get the prized running back’s signature on a National Letter of Intent.

However, Evans never ended up as a Dawg.

Prior to the Texas 6A State Championship, which North Shore won, Evans was sent home due to a violation of team rules. The unspecified off-the-field issue wasn’t exactly clear, but something caused Evans’ college announcement to throttle back in a hurry. As 247Sports’ Steve Wiltfong reported, Georgia later released Evans from his NLI without penalty from the NCAA, allowing him to sign with another school and be eligible to play in the 2020 season.

UPDATE (May 11, 2020): After months of uncertainty drawn out by the outbreak of COVID-19 and the coronavirus pandemic, Evans finally made his college decision.

First reported by 247Sports, Evans enrolled and attended his first online class at Texas Christian University on Monday, May 11. Head coach Gary Patterson and the TCU Horned Frogs shocked everyone and landed the program’s first five-star recruit in the modern era.

This article was originally published May 15, 2019. It’s been updated several times, tracking Evans’ wild recruitment and eventual commitment to TCU.