The Los Angeles Angels are bad--so bad that they haven't won a playoff game since 2009 and have posted seven straight losing seasons despite touting the league's MVP or Rookie of the Year in four of those. Teams with two generational talents like Mike Trout and Shohei Ohtani should not be as bad as this one is.

What if I told you there is a way to explain the unfortunateness that is the Angels? That there's a spooky phenomenon gripping Angel Stadium that extends beyond just mediocre play? Because dating back to the mid-1960s, there's been something strange going on with this franchise--a long list of death and tragedy--almost as if an expert voodooist pierced a dummy rally monkey with pins and needles.

When the Angels' Curse May Have Began 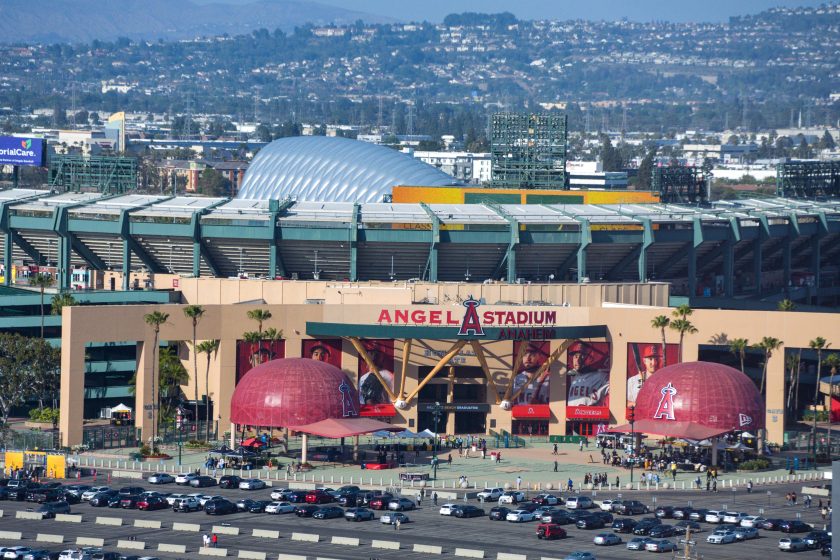 Some think this curse traces back to the mid-1960s. Back in 1964, the original Anaheim Stadium broke ground in August 1964. According to the Orange County Register, the land the stadium sat atop was "140 acres of farmland and what the Acjachemen Nation, the juaneno band of Mission Indians, believe was their ancient burial ground."

Building stadiums on top of ancient burial grounds sounds like the perfect way for a team to be cursed. Even the team's general manager at one point in the 1970s acknowledged there could be a curse. The team has tried everything from calling in experts to phoning in local tribes to help rid it of a supposed curse.

Sure, the team won the World Series in 2002 and has made plenty of trips to the playoffs throughout the decades. But even into the 21st century there's plenty of occurrences that could be attributed to a curse.

A Timeline of the Halo Curse 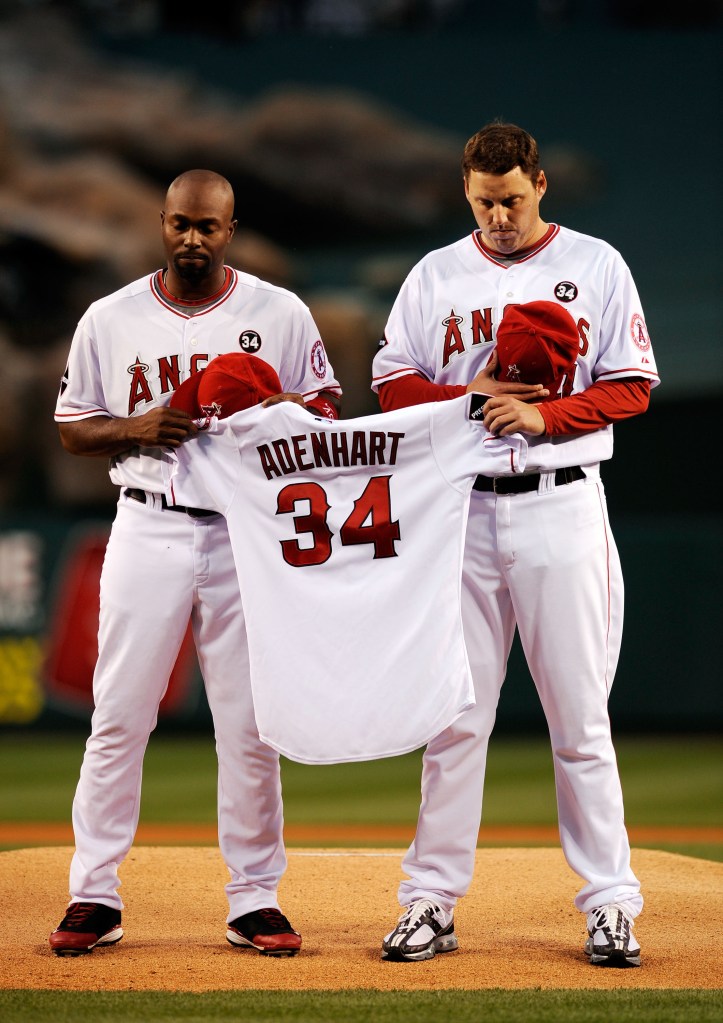 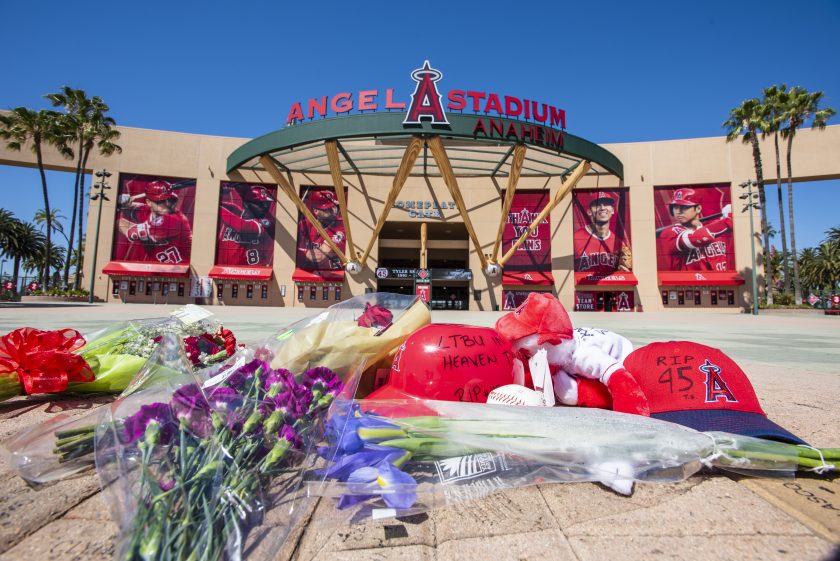 The Angels Tried Dispelling the Curse 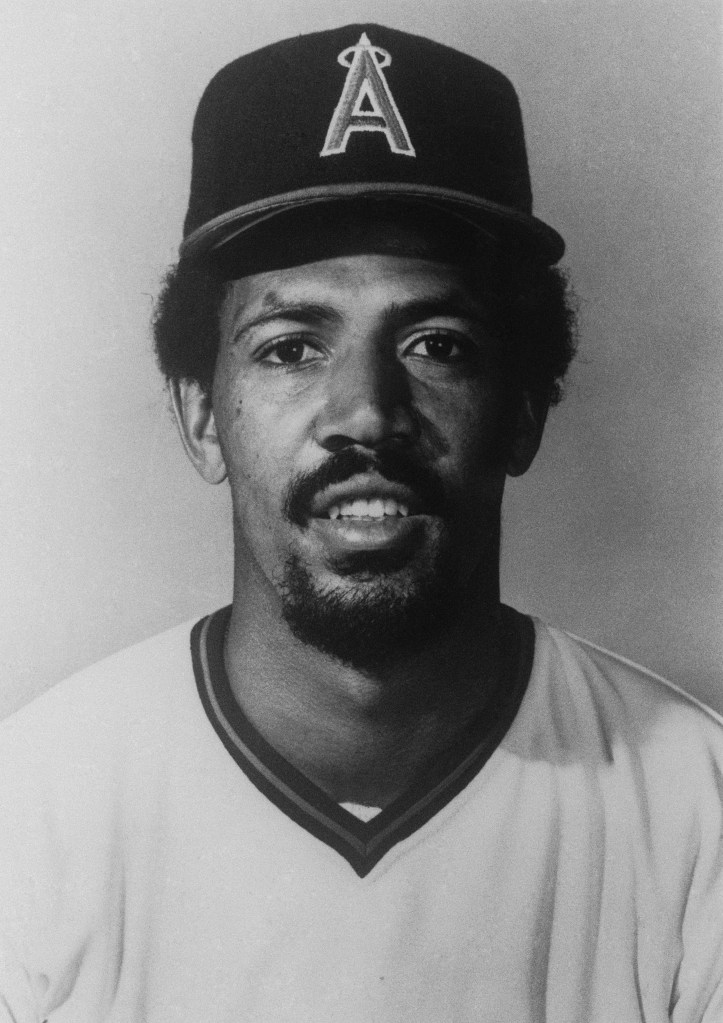 Lyman Bostock was shot and killed in Chicago while playing for the Angels in 1978. The 27-year-old outfielder was one of the team's best players at the time. (Bettmann/Contributor/Getty Images)

Throughout the years, the Angels have turned to experts to get rid of the curse.

In August 1977, the team was slumping so bad they decided to call Louise Huebner. She was the head of a nationwide coven consisting of 4,000 witches. She gave players magic circles and told them to rub them at 9 p.m. under a full moon. It worked. The team went 6-0 with her. "CURSES! ANGELS WIN ANOTHER FOR THE WITCH," read one headline in the Los Angeles Herald-Examiner, according to Baseball Guru. However, some players -- like Bobby Bonds -- insulted her during her time, and she pulled out.

"I wasn't too thrilled being involved with them. I felt I shouldn't have used the energy of the Magic Circle, because the Angels were not sincere and honest. They didn't participate or give anything back," she said.

"I'm not Mary Poppins. I don't have to help anybody. So I just pulled out. I put the Curse back on."

Some 30 years later, players were given figurines to "protect them." In 2002, the ballpark was blessed by a local tribe before the season began. The Angels won the World Series that season. Coincidence? I think not.

Much like the one with the billy goat and the one with Babe Ruth, curses usually end with a World Series. But the Adenhart, Valbuena, and Skaggs incidents say otherwise.

So, Are the Angels Really Cursed? 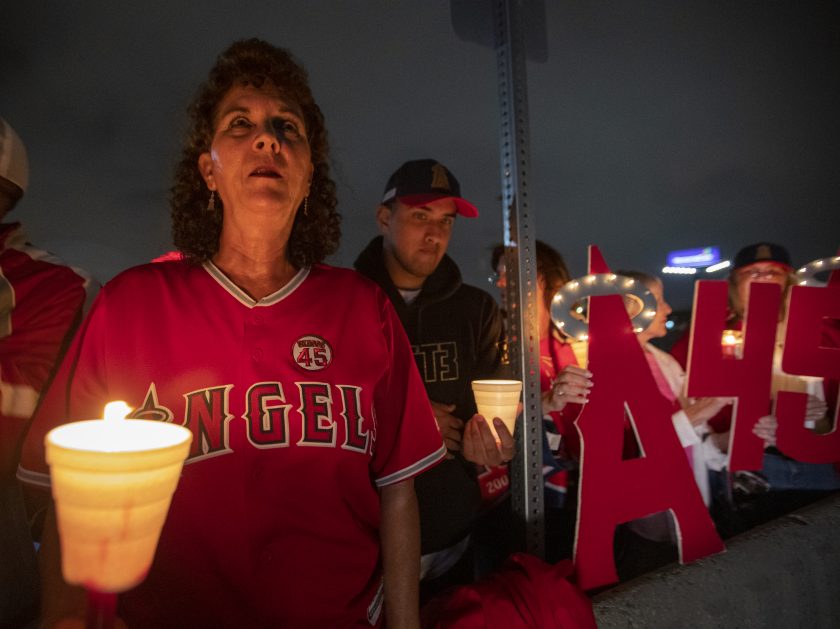 Lorri Renek of Anaheim joins other fans paying their respects to pitcher Tyler Skaggs during a vigil at Anaheim Stadium July 7, 2019 as the players arrive home for the first time since Skaggs' death. (Photo by Allen J. Schaben/Los Angeles Times via Getty Images)

That depends on whether you believe in curses. After digging into all of this (and I know it's a lot to take in), I certainly do. But for a curse to be real we have to prove that can't all just be coincidence. The sheer number of unfortunate events alone will show that.

Exactly 52 players have died while on an active MLB roster since the original Angel Stadium broke ground in August 1964. Eight of them were either on the Angels at the time, recently played for the Angels or were known for their time in Anaheim.

And according to a piece over at SABR.org, 32 MLB players died while on a roster or within a year of their last game from 1960-2011. The Angels were linked to seven of those. The next closest by team? The Cleveland Indians, who lost three players--two of which died in the same 1993 boating accident.

If curses and hexes and spells are real, then the Angels are most certainly cursed. There's no other way to explain this. Some advice for Trout and Ohtani: don't step on any cracks, and for the love of God stay away from black cats.

MORE: The Curse of the Billy Goat: How the Cubs Doomed Their World Series Chances for 71 Years