Two World Wars, 19 presidents, the moon landing, the birth of the car, the iPod and the iPhone were between the Chicago Cubs' second and third World Series titles. It was a long, painful 108 years. So long that the Cubs became known as "The Lovable Losers."

From when the drought started in 1908 to 1945, the Cubs were still competitive. They captured seven National League pennants, but their seventh in 1945 would be their last for 71 years.

You can chalk it up to incompetence in the front office, poor performance on the field, or a foul ball that ruined a guy's life. But Major League Baseball lore points back to a specific moment at the '45 World Series when Chicago's luck changed for the worse.

What is the Curse of the Billy Goat?

#OnThisDay in 1945, tavern owner "Billy Goat" Sianis buys a seat for his goat for Game 4 of the Baseball World Series. He is escorted out and casts a goat curse on the Chicago Cubs: ?You are never going to win a World Series again because you insulted my goat?. pic.twitter.com/B2e9VGZiEO

William "Billy Goat" Sianis was like any other Cubs fan. He wanted to see his beloved team win a World Series title and see them do it in person. So, on October 6th, with the Cubs holding a 2-1 series lead over the Detroit Tigers, "Billy Goat" bought two box seat tickets to Game 4. To ensure favor was on his team's side, he wanted to bring his pet goat, Murphy, with him as a good luck charm.

However, ushers stopped the goat from entering because animals were prohibited. Billy was furious enough to take it up with Cubs owner P.K. Wrigley who said, "Let Billy in, but not the goat." When Billy asked why the goat couldn't come in, Wrigley responded, "Because the goat stinks." Billy was livid and laid down what would change the franchise's trajectory.

"The Cubs ain't going to win no more," he said. "The Cubs will never win a World Series so long as the goat is not allowed in Wrigley Field."

The dooming words came to fruition when the Cubs dropped Game 4 and the series. Billy got the last laugh when he sent a telegram to Wrigley saying, "Who stinks now?" Little did Wrigley know his minor decision would haunt his franchise for over half a century.

Seventy-one grueling years later, the Cubs broke the curse by beating the team formerly known as the Cleveland Indians in the 2016 World Series. The city of Chicago breathed a sigh of relief. It was over.

"Billy Goat" is famous for placing a curse on the Cubs, but he also made a name for himself as the founder and owner of the Billy Goat Tavern. 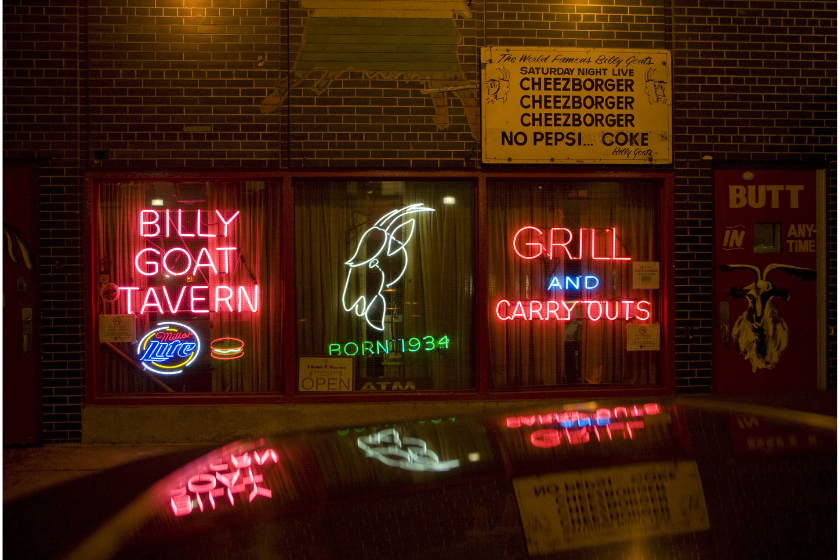 "Billy Goat" Sianis founded the original Billy Goat Tavern in 1934. Originally known as the Lincoln Tavern, it got its namesake when a goat fell off a passing truck and walked inside. Billy proceeded to adopt the goat and grow a goatee, thus earning the nickname "Billy Goat." Because of its location near Chicago Stadium (now the United Center), the Billy Goat Tavern became a popular destination for sports fans.

The Billy Goat Tavern is known for its burgers, particularly its famous "Cheezeborger," a thin-patty cheeseburger served on a toasted Kaiser roll. It also has everything else you would want from a sports-centric bar, like a variety of burgers, sandwiches, hot dogs, and beer.

Besides the curse and food, the tavern became famous for inspiring the "Olympia Cafe" sketch in the early days of "Saturday Night Live." Don Novello wrote it while Chicago natives John Belushi and Bill Murray chipped in due to their familiarity with the Billy Goat. Belushi, Murray, Dan Akroyd, and Larain Newman performed in it.

These days, the Billy Goat has seven locations around the city. It's stayed a family business, too; Sam Sianis, Billy Goat Sianis' nephew, runs the chain now.

If the Cubs ever make the World Series again and Sam wants to enter with his goat, Wrigley Field employees will be sure to let him in. Fans can't go another 108 years without a title.