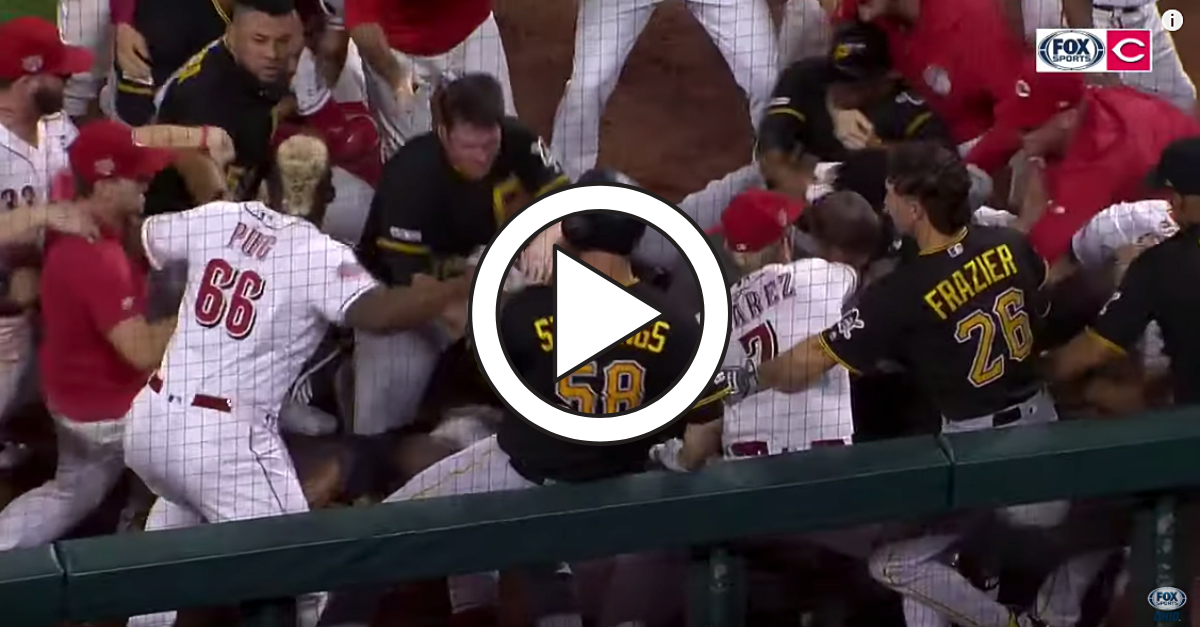 CINCINNATI (AP) ? Jared Hughes’ errant pitch threw a load of fuel on one of the majors’ most flammable rivalries.

Call it Pirates vs. Reds, round two ? and a fitting farewell for Yasiel Puig.

Hughes hit Starling Marte with his first pitch in the ninth inning Tuesday night, setting the stage for the latest dust-up between the Ohio River rivals. Four Pirates and four Reds were ejected in Pittsburgh’s 11-4 win, including Puig, who was in the process of being traded.

“The ball just slipped and it was real unfortunate and a lot of bad things happened afterward,” Hughes said.

And it’s not over.

Jared Hughes has been ejected for hitting Starling Marte. Amir Garrett is pissed about something. This is insane.

Reds manager David Bell faces a suspension for coming back onto the field and going after Pirates manager Clint Hurdle during the fracas. Bell had already been ejected for arguing a strike call an inning earlier.

And there was Puig, who’s headed to Cleveland as part of a three-team deal for starter Trevor Bauer, a person familiar with the negotiations told The Associated Press. The person spoke on condition of anonymity because the trade had not been announced.

Puig prolonged the fight that started when Reds reliever Amir Garrett went toward the Pirates dugout and threw several punches.

The NL Central rivals have been going at each other for years. The nastiness resumed this season when Derek Dietrich admired his homer at PNC Park in April, touching off a fracas.

On Tuesday, Dietrich got into the lopsided game late, and Keona Kela threw a fastball up-and-in that set off the Reds.

“I just wanted to show them that we didn’t agree with the way things went down, and you have to pitch in,” Kela said. “I was just going my part.”

“Today was an example of us standing our ground for what we think is right,” Votto said. “At some point, a group of players has to do that.”

Joey Votto offers his thoughts on tonight's brawl and the importance of teammates standing up for each other.#BornToBaseball | #Reds pic.twitter.com/ldEPYl9dRV

Both benches had been warned when Hughes plunked Marte, so the reliever and Reds bench coach Freddie Benavides were ejected. Garrett relieved and, during the inning, traded words with Pirates starter Trevor Williams, who was in the dugout.

Garrett ran from the mound toward the dugout and started swinging as players came onto the field. Garrett was upset over the up-and-in pitch to Dietrich.

“I definitely do think they teach that in that organization,” Garrett said. “I don’t think it’s right to throw at somebody. That’s not something you should do. If you have a problem, handle it like a man.”

When the fight began, a livid Bell ran back onto the field and went after Hurdle, who got knocked to the ground in the scrum. Pirates hitting coach Rick Eckstein got Bell in a headlock. Bell yelled at Hurdle as he left the field.

“It’s a shame that this is allowed and that they’re able to get away with it,” Bell said of the up-and-in pitch. “They celebrate it, they support it, they clearly allow it. I don’t know if they teach it, but they allow it. It’s dangerous.”

This guy … I don't write this lightly, but there are a couple occasions in this session where it feels like David Bell's about to start crying. Like the part where he suggests Clint Hurdle should be banned from baseball. https://t.co/IRhsUexvoq

Four Pirates were ejected: Williams, Chris Archer, Kyle Crick and Francisco Cervelli, who is on the injured list.

Puig was given a warm ovation from Reds fans as he left the field after his ejection, knowing he was headed to Cleveland. He was also at the center of the memorable fight that followed Dietrich’s homer in April, taking on nearly the entire Pirates team at one point ? a striking image with Pittsburgh sporting bright yellow throwback uniforms.

As for the game, Pittsburgh ended a nine-game losing streak behind trade candidate Corey Dickerson, who had another big game at Great American Ball Park. He drove in a career-high five runs with a pair of homers and a single. In 14 career games at Great American, Dickerson is batting .431 with nine homers and 18 RBIs. He’s had three four-hit games and three multi-homer games.

Joe Musgrove (8-9) set a career high with his eighth win. He went six innings and gave up solo homers by Votto and Jose Iglesias . Tanner Roark (6-7) had a rough time Tuesday. He lasted only 3 1/3 innings ? his shortest start of the season ? and gave up five runs.

The teams conclude the series Wednesday, with neither one looking for another confrontation but not backing away, either.

“I wouldn’t be surprised if it sparks again,” Musgrove said, noting that Bell ran back onto the field to join in the fight. “We don’t take lightly what happened tonight.”

Pirates: Dickerson was back in left field after missing three games with a sore groin.

Reds: Reliever David Hernandez will be activated before the final game of the series on Wednesday. He’s been on the injured list with shoulder fatigue.

Pirates: Dario Agrazal (2-1) makes his seventh start since his major league debut June 15. He gave up a career-high three homers in a 6-3 loss to the Mets on Friday.

Reds: Luis Castillo (9-4) is coming off his worst start of an All-Star season. He gave up a career-high six runs in five innings of a 12-2 loss to the Rockies on Friday.