OAKLAND, Calif. (AP) -- San Francisco Giants manager Gabe Kapler plans to use his position to speak out against racial injustice and provide a voice for those who aren't heard.

Kapler and several of his players knelt during the national anthem before their 6-2 exhibition victory against the Oakland Athletics. Kapler shared his plans when he addressed the team earlier Monday, and he said everyone would be supported by the Giants no matter what they decided to do.

Right fielder Jaylin Davis, who is African American, and first base coach Antoan Richardson also took a knee as shortstop Brandon Crawford stood between them with a hand on each of their shoulders. Davis held his right hand over his heart, while Richardson, who is Black and from the Bahamas, clasped his hands in front of him.

Much discussion went into each person's choice, and Kapler said some of the Giants reached out to other organizations. Kapler said the Giants would continue to have such important discussions together as a team and "make them a part of the fabric of our clubhouse." 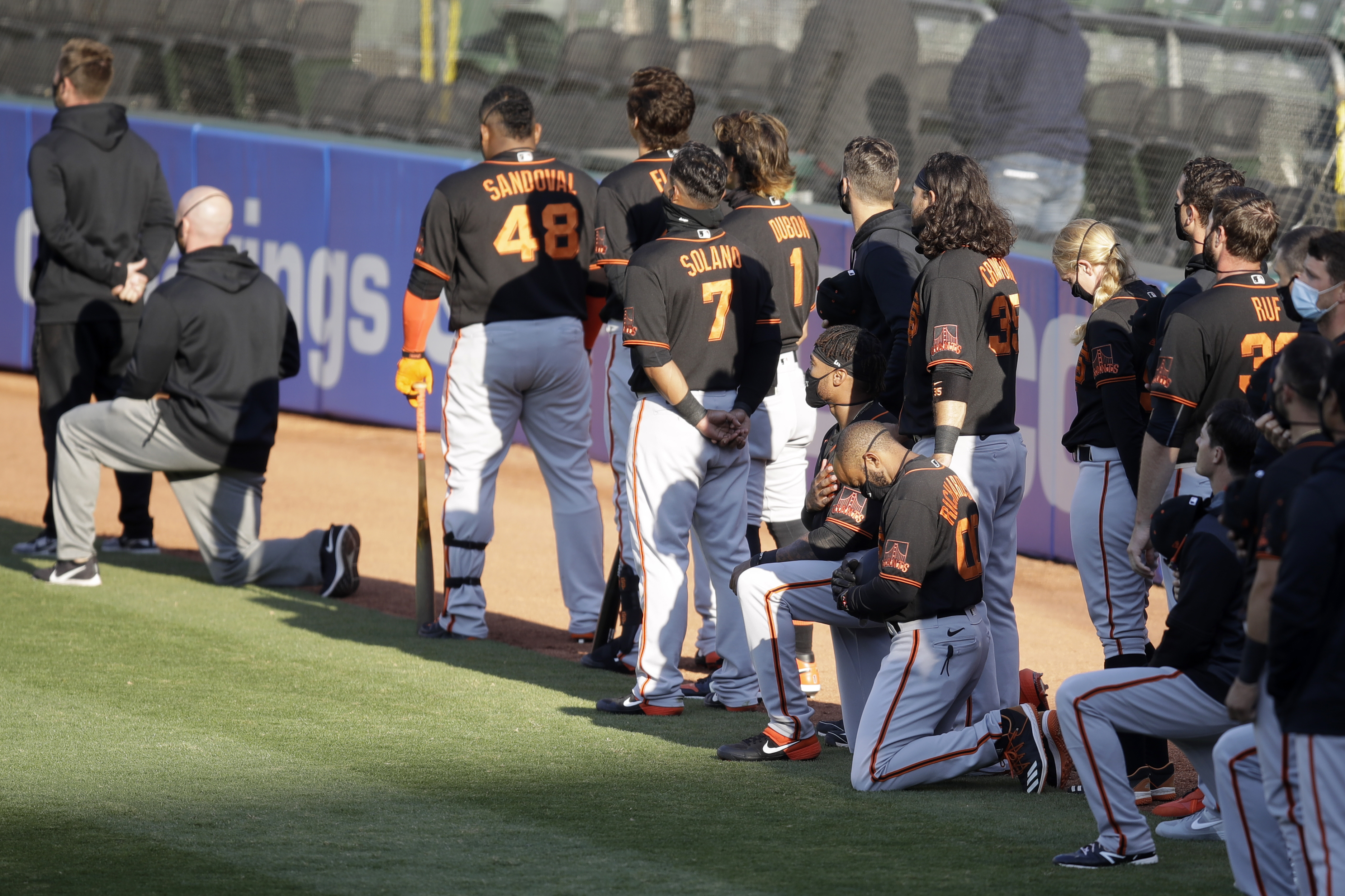 It was on the same field where former A's catcher Bruce Maxwell in 2017 became the first major leaguer to kneel for the anthem.

In San Diego, Angels reliever Keynan Middleton kneeled and raised his right fist during the national anthem before the team's 1-0 victory over the Padres.

Angels manager Joe Maddon said Middleton told him in advance he wanted to kneel, and the team was "totally supportive" of the decision.

"I'm very proud that he stood up for his beliefs tonight. I really am," Maddon said. "It's not easy to do that, a young man like himself, being the only one out here doing that."

Keynan Middleton kneeled and raised his fist during the national anthem prior to tonight?s game. pic.twitter.com/eHt7IdmNKA

Kapler, beginning his first season managing the Giants after two disappointing years guiding the Phillies, didn't say for certain how often he would kneel except that "we're going to have 60 chances in the regular season to make the same decision that we made today, to either stand or kneel or do something different. Right now it's another opportunity tomorrow night."

Kapler has been outspoken about social injustice and racial issues and athletes' roles in helping spur positive change.

"They felt strong about the issue so they knelt," A's pitcher Mike Fiers said.

Former San Francisco 49ers quarterback Colin Kaepernick started taking a knee during the national anthem in 2016 to protest racial inequality and police mistreatment of minorities. He was roundly criticized for years, but public sentiment has changed since George Floyd's death in May.

Floyd, a Black man, died after a white Minneapolis police officer pressed his knee into Floyd's neck while Floyd was handcuffed and saying that he couldn't breathe.

Also Monday, Alyssa Nakken -- baseball's first woman on a major league staff -- got a chance to coach first base for San Francisco.

"Congratulations on making history!" Hunter Pence posted on Twitter shortly after the final out.

MORE: Removing Our National Anthem from Sports Would Be a Disgrace