Barry Bonds Belongs in the Hall of Fame. No Question. 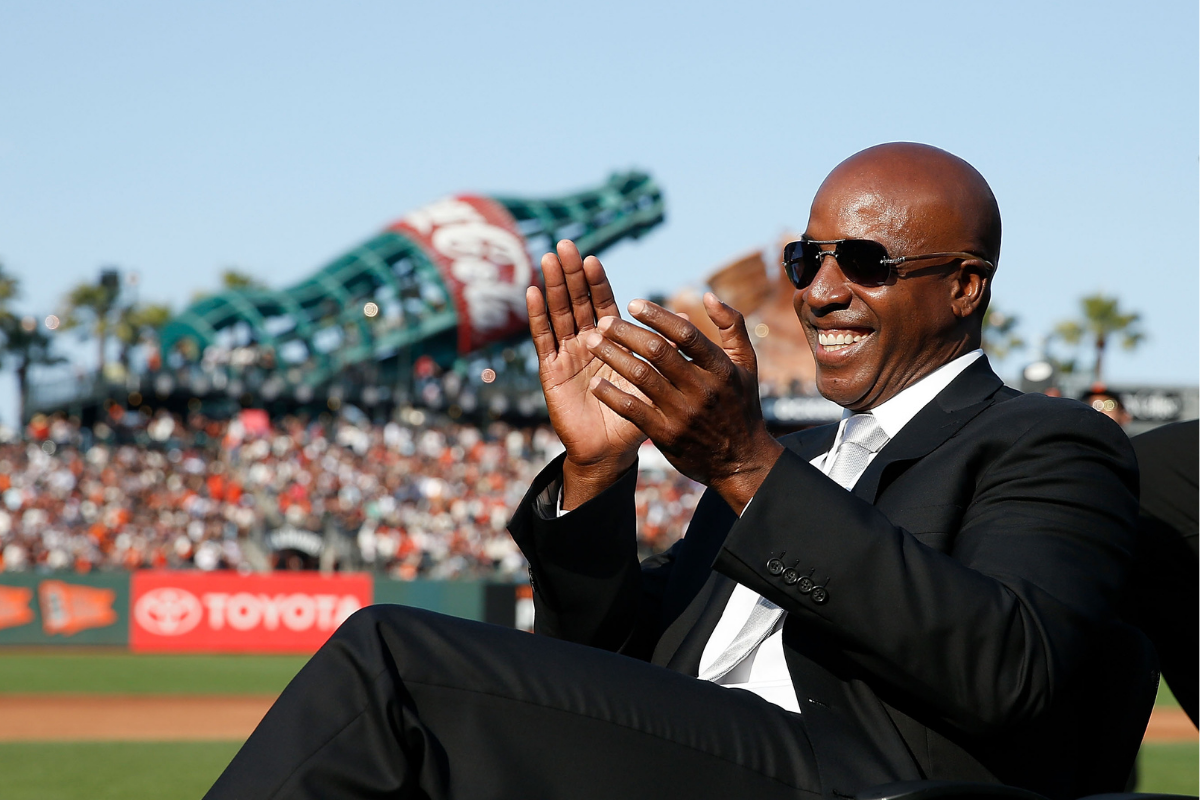 There are a handful of humans in the discussion for best baseball player of all time. They are, in my opinion, Babe Ruth, Barry Bonds, Willie Mays, Hank Aaron and eventually, Mike Trout.

Trout is so good at such a young age that he could retire today and be a Hall-of-Famer. Ruth not only changed baseball but saved it with his never-seen-before power-hitting abilities. Heck, he even had more than 20 awesome nicknames. Aaron held the career home run crown until Barry Lamar Bonds came along and, well, gave everyone something to talk about.

So let’s talk about it.

Barry Bonds deserves to be in the National Baseball Hall of Fame. He does. You can’t keep the greatest player ever out of the game’s museum of best players. It’s like no Michael Jordan in the Basketball Hall of Fame or no Tiger Woods in the Golf Hall of Fame.

Bonds is currently part of a group of Major League Baseball’s all-time greats on the outside looking in. They not only changed how the game is played, but they also were some of the best to ever step on a diamond.

Is Barry Bonds in the Baseball Hall of Fame?

RELATED: Barry Bonds’ Before and After Photos Tell His Entire Story

I like to imagine this group gathering around a poker table during baseball’s Hall of Fame induction weekend. The gambling-addicted Pete Rose is all in on every hand. The illiterate Shoeless Joe Jackson is struggling to read his cards. Barry Bonds, Mark McGwire and Roger Clemens are banging out bicep curls under the table.

But make no mistake, they all deserve recognition in Cooperstown. Bonds, whose career was clouded with steroid and performance-enhancing drug allegations, most certainly deserves enshrinement in the Hall.

It’s silly to pretend Bonds isn’t the single greatest power hitter in the modern era. He crushed a Major League-record 762 home runs and is baseball’s disputed home run king. He earned more walks than anyone in the history of the game, because he’s the most feared hitter to ever live.

Don’t believe me? How many players have been intentionally walked…with the bases loaded?

It’s also just as silly to pretend Bonds didn’t magically evolve from a point guard’s physique to that of an NFL linebacker. The Bay Area Hulk’s head even appeared to change shape over the course of his career.

But we can recognize both. And we should. It doesn’t make sense to keep him out of the HOF and still count all of his statistics and games he played. If that were the case, then John Smoltz, Greg Maddux, Curt Schilling and the 446 other pitchers technically never served up home runs to Bonds.

What Bonds did as a member of the San Francisco Giants was unfathomable. He joined the team as a 27-year-old two-time MVP Award winner and hit 586 home runs from that point on until his last year as a 42-year-old in 2007.

In 2001, he broke Mark McGwire’s single-season home run record. No. 71 came against Los Angeles Dodgers pitcher Chan Ho Park on Oct. 5. He finished with 73 homers and knocked in 137 RBIs while hitting .328. The behemoth outfielder crushed at least 40 long balls in eight seasons with San Francisco.

He and teammate Jeff Kent carried the Giants to the playoffs four times from 1993-2007. Bonds even walloped eight homers in the 2002 postseason, in which San Francisco fell to the Anaheim Angels in the World Series.

Bonds broke Hank Aaron’s career home run record in 2007 when he blasted No. 756 on Aug. 7 against Washington Nationals pitcher Mike Bacsik. The sports world stood still as Bonds, immediately raising his arms in celebration, watched the ball sail into a frenzy of fans beyond AT&T Park’s right-center field wall. He finished his final year with 762 career homers.

Not only is Bonds’ baseball-reference page hilarious to peruse, it is incredibly easy to get lost in the many lists of factoids from his playing career. Here are just a few of my favorite:

Before he was the size of a WWE wrestler depositing moon balls into McCovey Cove beyond the right-field concourse at AT&T Park, he was already on track for a Hall-of-Fame career with the Pittsburgh Pirates.

He won the 1990 and 1992 National League Most Valuable Player award with the Pirates. Bonds hit more than 30 home runs, stole more than 30 bases and hit higher than .300 in each of those seasons. It was clear that even before the steroid allegations he was a rare talent heading for superstardom.

Said talent was easy to spot even when Bonds was a teenager.

The Giants actually initially drafted him in 1982 but were unable to sign him because they didn’t meet his $75,000 demand. Bonds instead headed to Arizona State University, where he hit .347 and 45 home runs for the Sun Devils. Though he was hated by teammates for his arrogance, as Jeff Pearlman detailed for ESPN, he emerged as one of the best college players in the nation.

The Pirates made Bonds their first round pick (6th overall) in the 1985 MLB Draft and he quickly rose through the club’s minor league system. He showed promise as a speedy slugger in his early 20s and by 25 he was the league’s MVP.

This day in #PGHistory: At Three Rivers Stadium, Barry Bonds hits his 100th home run – as the Pirates defeat the Padres 4-3. pic.twitter.com/Eo2eroSZQW

Explain to me how you keep these honors out of Cooperstown:

Maybe you glossed over that list and cried out, “Steroid Use!” If so, that’s perfectly fine. You’re entitled that same opinion held by a majority of baseball fans and members of the Baseball Writers Association of America (BBWAA), who vote each year for potential Hall of Fame inductees.

The pile of evidence that Bonds knowingly took anabolic steroids is a mile high. The U.S. government reportedly found a positive drug test of Bonds in a 2007 raid of the Bay Area Laboratory Co-Operative (BALCO), a supplements lab in California founded by Victor Conte whose clients allegedly consisted of many MLB players.

Bonds did nothing but deny performance-enhancing drug use until 2011, saying he was misled by his personal trainer, Greg Anderson. He said he thought he was taking flax seed oil and arthritis cream, and he never tested positive by the MLB. Believe what you want.

Still, it doesn’t make sense that former MLB commissioner Bud Selig was inducted into the Hall of Fame in 2017.

Selig is credited with baseball’s rise in popularity during the late 1990s after the 1994 strike, but only because he turned a blind eye at the sport’s painfully obvious rampant PED use. It wasn’t until 2002 that he addressed the steroid era and started cracking down on PEDs under the league’s joint drug program.

One drug Bonds has been linked to — human growth hormone (HGH) — wasn’t even banned by MLB until 2005.

Yet the line of players tied to steroids who haven’t received and may never will receive enshrinement in Cooperstown remains unmoved. Players like Bonds, Roger Clemens, Sammy Sosa, Manny Ramirez and Gary Sheffield have fallen short of the need 75 percent of the vote.

Others like Mark McGwire and Rafael Palmeiro were never close to that number and fell off the Hall of Fame ballot. Future names on the ballot — Alex Rodriguez and David Ortiz — will face difficulties getting in as well. Longtime New York Yankees shortstop Derek Jeter was a sure lock among first-time candidates in 2020, joining five-time All-Star Larry Walker, whose 383 career home runs in 17 seasons are barely half of Bonds’ total.

Five players — Mariano Rivera, Edgar Martinez, Harold Baines, Mike Mussina and Roy Halladay — were inducted in 2019. Bonds fell short of the 75 percent needed, as did Clemens, who won an incredible seven Cy Young awards but was named in the Mitchell Report at the end of his career.

Bonds may seem far from getting in, but history shows there’s a chance he could earn more than 75 percent of the Hall of Fame voting. Andre Dawson and Don Drysdale, among others, shared similar situations, though the circumstances are of course different in Bonds’ case.

Ryan Thibodaux has been collecting ballot information and compiling it here, and it shows even more support for Bonds among publicly known ballots. The former Pirate and Giant still needs more than 50 votes based off 2021 HOF tracker figures, however.

It doesn’t take a rocket scientist to know that Barry Bonds was one of the most gifted players to ever play the game of baseball. Even before the steroid allegations, he was a two-time MVP in Pittsburgh and likely on track for Cooperstown.

The San Francisco Giants legend deserves a spot in Cooperstown, even if that means an asterisk on his plaque. You can’t try to hold Bonds accountable while letting Selig off the hook. It doesn’t work that way.

The late Joe Morgan, the former Hall of Fame’s vice chairman, argued to keep steroid users out. Reggie Jackson, another storied Hall-of-Famer, has argued the opposite side. And as The Undefeated notes, racists like Cap Anson taint the Hall already. Plus, players still use PEDs and drugs in today’s game and were using long before the steroid era. Ever heard of greenies or Doc Ellis’ LSD no-hitter?

Several suspected steroid users such as Ivan Rodriguez, Jeff Bagwell and Mike Piazza have already garnered induction in recent years. Bud Selig, the overseer of the steroid era, has also been enshrined.

This article was originally published September 16, 2019. It was updated following the 2021 HOF ballot voting, with Bonds still on the outside looking in.