Barry Bonds’ No. 25 Gets Retired, Reminding Us He’s Still a Cheater 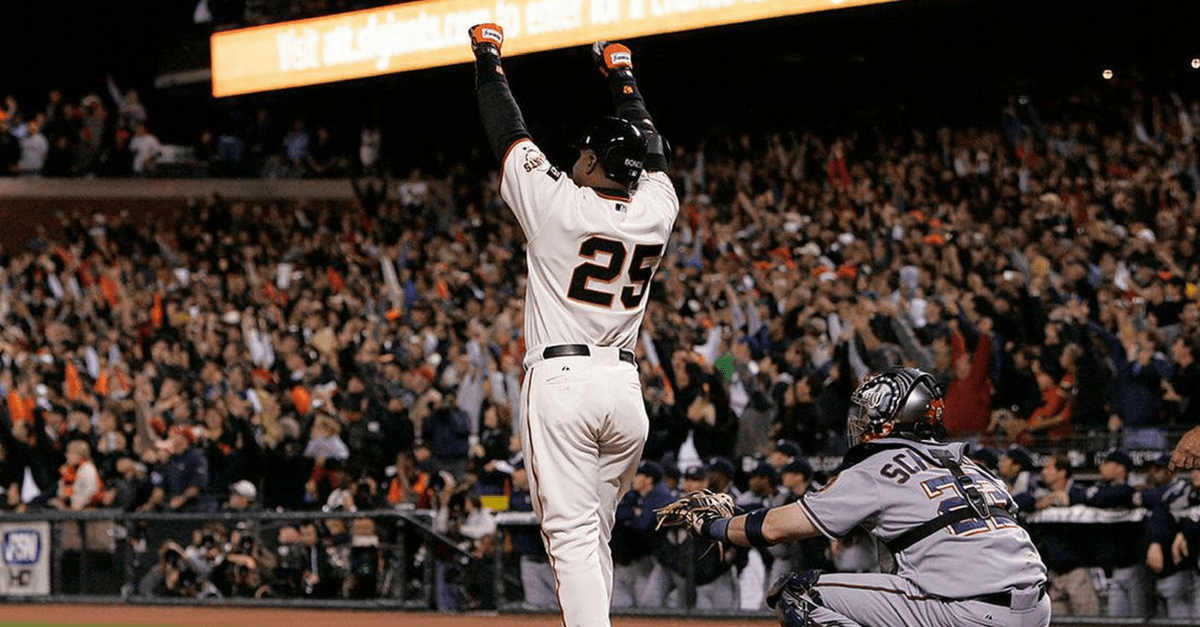 Babe Ruth owned two entire decades. Ted Williams was on base 48.2 percent of the time while he played, the all-time record. Randy Johnson changed the way pitchers are built — plus, he made a bird explode. All of them are legends, but none were the scariest.

Like him or not, Barry Bonds was the single most feared baseball player in the long and storied history of the game. No one can come up the plate with the bases loaded in the ninth inning, his team down two runs, and be intentionally walked except for Barry Lamar Bonds.

Having said that, Barry Bonds is still the biggest cheater in baseball history.

To be honest, you don’t take steroids and hit 762 career home runs on accident. Bonds had a ton of skill to go along with his power — he’s the only player in baseball history to hit at least 500 home runs and steal 500 bases, plus he won eight Gold Gloves as an outfielder.

Those numbers alone should eventually land the game’s all-time home run king in the Hall of Fame, but he missed out on induction for the sixth year in a row in 2018, getting only 56.4-percent of the 75-percent he needs to be inducted into Cooperstown.

Steroid use is keeping Bonds out, for now.

Surrounded by former teammates, Giants legends like Willie Mays, family and friends at AT&T Park, Bonds gave San Francisco the thank you they deserved. He’ll forever be a legend in that city.

?I think the park thing is more to me than the number thing, because I built this park. That?s all,? Bonds said. ?When I walk in this ballpark, I know whose house it is.?

Bonds apologists combat his unnatural growth from his time with the Pittsburgh Pirates versus his time in San Francisco as a young man growing into a slugger’s body.

It’s not growing up, folks. You don’t naturally double in size.

Would Bonds still have broken Hank Aaron’s legendary record, as well as set the all-time MLB record for career walks and intentional walks?

It’s hard to say, because it’s really unknown for how long he was juicing. What is certain, though, is Bonds cheated the system.

He was indicted on perjury charges and obstruction of justice during the BALCO scandal for lying about his use of performance-enhancing drugs that did not show up during MLB drug screenings.

He admitted using what was called “the clear” during his grand-jury testimony.

Bonds won the NL MVP award seven times, three of which all came earlier prior to the 1994 season. Bonds was an incredible baseball player, but the truth is that his numbers are unnaturally inflated by his PED use.

?Without question he is the best player I ever managed in my 22 years as a major league skipper. Let all of us be thankful that we had the opportunity to see one of the greatest players that?s ever lived for so many years.?

It’s hard to justify discrediting an entire career, but there is a huge asterisk next to Bonds’ name in the minds of every professional baseball fan because of it.

Barry Bonds will make the Hall of Fame one day, and having his jersey retired by the San Francisco Giants during a game against the Pirates is a fitting tribute to the legend.

READ MORE: Barry Bonds Shows He’s Still Got Some Homers Left in Him