The 1989 film "Field of Dreams" is defined by one quote that's embedded in movie and baseball fans' memories. I describe it so loosely because anyone who's seen it knows what I'm talking about.

Farmer Ray Kinsella (played by Kevin Costner) hears the mysterious voice coming from his cornfield. We eventually find out who will come, but where are they going?

Where is the Field of Dreams? 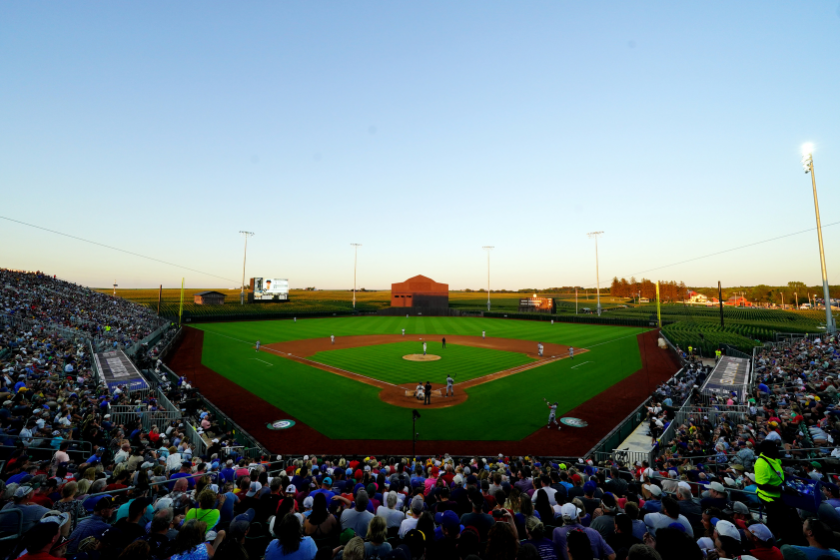 RELATED: Where is the "Field of Dreams" Cast Today?

"They'll come to Iowa for reasons they can't even fathom. They'll turn up your driveway not knowing for sure why they're doing it."

Specifically, they'll be coming to a spot right outside of Dyersville, Iowa. It's located at 28995 Lansing Rd, Dyersville, Iowa. Dyersville is located near the easternmost part of the state, not too far from Dubuque, the Illinois border and the Mississippi River.

In the movie, which received an Oscar nomination for Best Picture, Kinsella must turn the cornfield of his family farm into a baseball field after having a vision of iconic White Sox outfielder Shoeless Joe Jackson.

In real life, the Field of Dreams movie site is a big tourist attraction mostly on the land of a farm formerly owned by the Lansing family. It isn't just collecting dust these days, either. It commonly hosts youth baseball tournaments and games as well as events like concerts.

Spend a Night in The Field of Dreams House

Best sunset view ever? We sure think so. #Iowa #Baseball #FieldofDreams pic.twitter.com/pRJ78mPkJg

According to the movie site's official website, you can do more than just take a 30-minute tour of the home and the farm (which will run you $20 for adults and $12 for children).

Fans of the iconic movie can spend the night in the three-bedroom farm house to truly soak in the "Kinsella Experience." Rates begin at $500 but vary depending on the night, but the views overlooking those cornfields are priceless. Just don't run away if you hear voices when you walk outside.

The website also states anyone who rents the place out receives a gift basket including a bottle of wine, a DVD copy of "Field of Dreams" with popcorn to munch on and a book, "If You Build It," by Dwier Brown, who plays John Kinsella.

The famed movie set played host to the New York Yankees and Chicago White Sox in the Field of Dreams game last year. The first game was supposed to be in 2020, but it was canceled due to the COVID-19 pandemic.

The little baseball diamond seen in the movie sits right next to the site of a full-fledged ballpark that Major League Baseball built.

The stadium for the regular-season game between the Cincinnati Reds and Chicago Cubs holds 8,000 people. Fans will get another look at the stadium when they tune into Fox to see, but the town of Dyersville is ready for the influx of tourism. Karla Thompson, executive director of the Dyersville Area Chamber of Commerce, spoke about the economic impact the annual game has on the community.

"Tourists wanted to check out the stadium in case they didn't get tickets or couldn't come to the game," Thompson told the Des Moines Register. "We still saw an increase in tourism after the game as well."

The ball field pays tribute to Old Comiskey Park, the White Sox's home stadium until 1990. The main difference is beyond the outfield, particularly right field and left field, feature a rows cornstalks. The area behind center field is cleared for the bullpen. What's neat is that MLB built the stadium beyond the original corn of the movie site. Fans can even walk through the corn to get to the new shiny stadium.

A post shared by The Field of Dreams Movie Site (@thefieldofdreamsmoviesite)

Cincinnati and Chicago will look the part for the game, too. Both teams will don throwback jerseys to pay tribute to the game's history.

Here are the jerseys and hats the Cubs and Reds will wear during this year?s Field of Dreams Game pic.twitter.com/LvCdUCciYD

Maybe we'll see the Boston Red Sox or Los Angeles Dodgers play in the corn in the future. For now, it's built, and they're coming.

MORE: How Kevin Costner Getting Cut From His College Baseball Team Launched His Acting Career