Jackie Robinson is known for a multitude of moments throughout his career on the baseball diamonds of the Negro Leagues and the ones across Major League Baseball. They're other moments that didn't take place under God's light, where Jackie stepped up for his fellow ballplayers long after he had hung up his cleats for good.

When Jackie Robinson retired from the game of baseball at the age of 37, he had amassed a resumé and stat sheet that made any debate over his Hall of Fame candidacy irrelevant. Winning Rookie of the Year in 1947, then MVP in 1949, Jackie topped it all off with a World Series ring in 1955. Some players spend their entire careers working to achieve just one of those accomplishments, but Robinson was cut from a different cloth.

To me, Jackie's career numbers change depending on what light you hold them up to. With the game-changing to more of an offensive slugfest, it's easy to see how the smaller minutia of a player's game can be overlooked. Jackie Robinson's career is unlike any other, in that, the small intricate details of his personality, his character and his ability to play the game shine through.

And in one particular forgotten aspect of the game, Jackie's tenacity and skill is unmatched.

Jackie Robinson stole home better than anyone to ever step on third base.

Jackie Robinson and the 90-Foot Dash to Safety 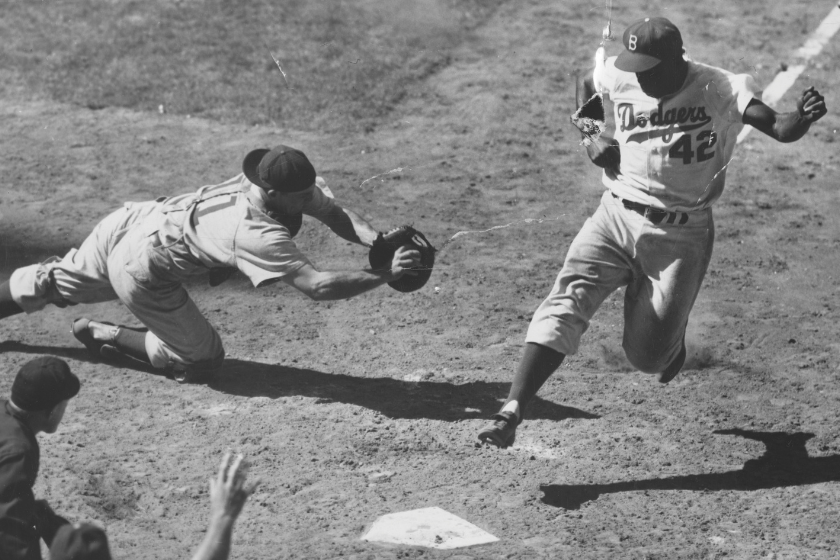 In today's game, the sight of a runner breaking from third base will turn the oldest fan into a kid again. It's something we rarely see and it's truly a thrill unlike any other. Why? Players steal second and third all the time, right? So what makes stealing home so difficult?

The answer is timing.

When taking off from second, a runner can get a late jump and still make it safely due to a bad throw. The throw from the catcher is important, as is the actual pitch from the pitcher. Noah Syndergaard of the Los Angeles Angels is famously slow to the plate, which requires a catcher with a quick pop-time (the time it takes a catcher to catch the ball, pop up from their crouch and release the ball) to be his full-time catcher. Third base offers a similar difficulty, but it adds in the fact that the catcher may have to throw around a right-handed batter.

When stealing home, those defensive impediments are gone. It's just you racing the pitch.

Jackie Robinson made 31 attempts at stealing home and beat the pitch 19 times in his career, the most of any player in the Live-Ball Era.

You read that right. Jackie Robinson, who only stole 197 bases in his career, stole home more than any other player to ever take the field. Rod Carew, who holds the record for the second-most stolen bases in MLB history, is the only other player since to steal home more than 15 times. Even the stolen base king, Rickey Henderson, only stole home successfully four times.

One of the greatest moments of Jackie Robinson's career came in that 1955 World Series between the National League Champion Brooklyn Dodgers and American League Champions, the New York Yankees. The Yankees led with Whitey Ford on the mound for Game 1, and he took the mound in the top of the eighth inning with a three-run lead. Jackie finds himself on third after reaching second base on an error and then advancing on a Don Zimmer sacrifice fly to center that scored Carl Furillo.

With his team down by two runs, the 36-year-old Robinson took his lead off third. That's an overlooked piece of this story. Can you imagine current day Evan Longoria or Josh Donaldson stealing home or really any base at this point in their careers? No? Well, Jackie Robinson did exactly that and did it in the World Series and against two Hall of Famers.

Jackie took his lead off of third base, waiting for Ford to take his delivery towards Yankees catcher Yogi Berra. The millisecond that Ford takes his eyes off Robinson, our speedy hero is off like a rocket. Jackie Robinson is racing a baseball thrown from 60 feet and 6 inches away from home plate and has a 30-foot disadvantage, with third base sitting 90-feet away from home.

But none of that matters. Because when Jackie Robinson wants to steal home plate, he's going to do it. Even if every fan in Yankee Stadium called out to Whitey Ford that Jackie was off and running, it wouldn't matter.

Berra immediately stands in an attempt to get in position to stop Jackie Robinson stealing a run. The pitch arrives in his glove, but it's too late. Umpire Bill Summers has already made the call. Jackie has avoided the tag and is safe at home.

Almost 70 years later, no other player has accomplished a straight steal of home plate. Several have tried like Lonnie Smith of the Atlanta Braves in 1991 and Manuel Margot for the Tampa Bay Rays in 2020, a feat he tried to accomplish against the Los Angeles Dodgers. Fun fact: this wasn't the first time a player tried to steal home in Game 1 of the 1955 World Series either. Billy Martin, who would go on to manage the Yankees, unsuccessfully tried to swipe the plate a few innings before Robinson.

At times like this, it's hard not to be romantic about baseball.

Baseball is a game built on inaction. In between the highlights is a weighted stasis, a thick hazy of pedestrian activity. It's the reason the current game can't compete with bombastic leagues like the NBA or NFL. Basically lives in the slow moments.

That's also where Jackie Robinson seemed to thrive, in the slow moments of the game. Except to Jackie, he could slow down any moment he wanted to.

The Risk of Safety 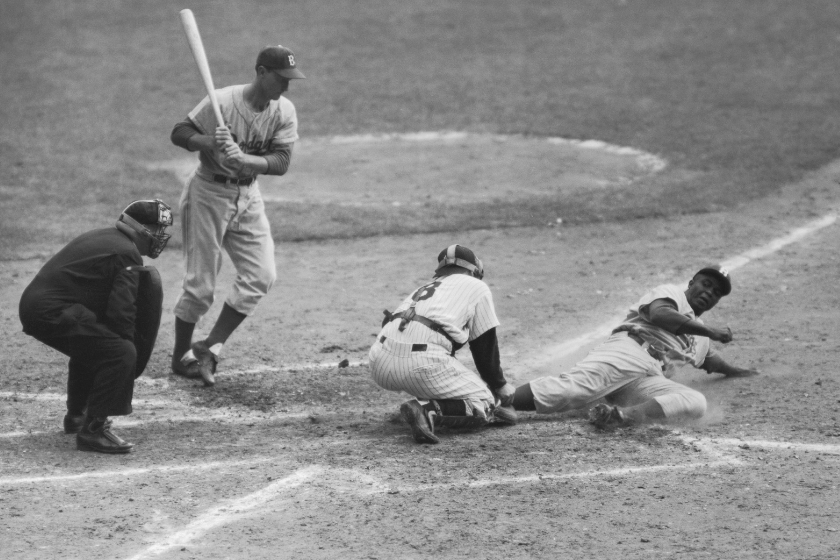 So much of Jackie's career in the Major League was spent in unsafe spaces. Whether it be on the road in Philadelphia or Pittsburgh, Jackie's safety as the player who broke baseball's color barrier was always in jeopardy, thanks to the people around him who were supposed to be in control. How poignant is it, that in one of the riskiest moments that can happen on a baseball diamond, Jackie was safe more than any other player.

But that's just who he was. Jackie once said "Life is not a spectator sport. If you're going to spend your whole life in the grandstand just watching what goes on, in my opinion, you're wasting your life."

Jackie was never going to be content with playing it safe. That wasn't how he took the field, or took the stand to defend St. Louis Cardinals outfielder Curt Flood, or stood up for Black and Hispanic coaches towards the end of this life. Each steal of home was a risk, but a necessary one to Jackie.

Jackie Robinson was fearless and he was rewarded more than any other player to leave the safety of third base in the pursuit of stealing home. 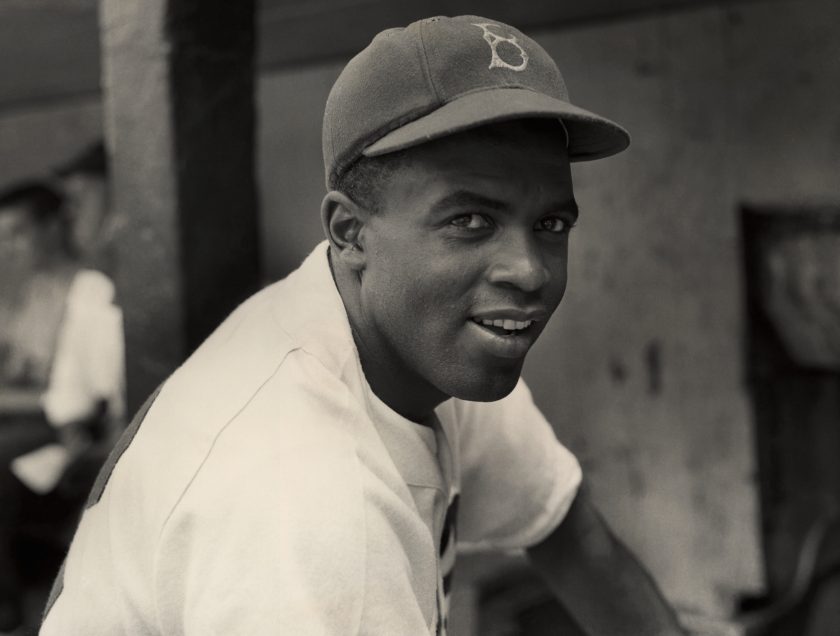 Jackie Robinson was the perfect baseball player. He knew how to play the game with strength, both physical and mental, as well as how to play without fear.

Two decades later, at Robinson's funeral, Reverend Jesse Jackson gave a eulogy that inspired tears of joy and remembrance. "His feet danced on the basepaths, but it was more than a game. Jackie began playing a chess game, he was the black knight. In his last dash, Jackie stole home and Jackie is safe."

For 10 seasons, Jackie Robinson stepped out onto a Major League field carrying players like home run king Josh Gibson, baseball mogul Rube Foster and unmatched hitter Oscar Charleston, and thousands of other Negro League legends who never got the chance to play in the Majors.

After being denied the opportunity to play in the Majors for so long, Jackie was done waiting. If he wanted something, he was going to it. Over his decade-long career, Jackie brought their fire and drive along with him as he raced around the bases.

If Jackie Robinson was going to steal home, you had no chance of stopping him.

MORE: 25 Athletes Who Served in the Military and Sacrificed Their Careers