John Rocker was Major League Baseball's greatest villain during his playing days with the Atlanta Braves, Cleveland Indians, Texas Rangers and Tampa Bay Devil Rays. Not in the way that LeBron James was hated by NBA fans for leaving Cleveland and creating super teams, or the way that Aaron Hernandez was disavowed for, well, breaking the law with seemingly no remorse.

The former Braves pitcher, for lack of a better word, was an asshole. In a famous Sports Illustrated article written by Jeff Pearlman in 1999, he verbally spat on nearly every ethnicity and minority group possible, almost as if he was trying to become the world's most terrible person.

What Did John Rocker Say? 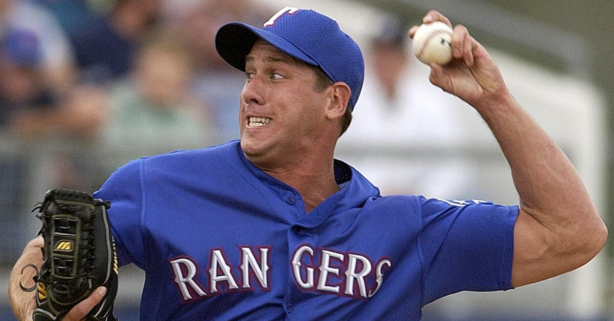 Here's just an excerpt from that article:

"I'd retire first. It's the most hectic, nerve-wracking city," Rocker said on the possibility of ever playing for the New York Mets or New York Yankees. "Imagine having to take the 7 Train to the ballpark looking like you're riding through Beirut next to some kid with purple hair, next to some queer with AIDS, right next to some dude who just got out of jail for the fourth time, right next to some 20-year-old mom with four kids. It's depressing... The biggest thing I don't like about New York are the foreigners. You can walk an entire block in Times Square and not hear anybody speaking English. Asians and Koreans and Vietnamese and Indians and Russians and Spanish people and everything up there. How the hell did they get in this country?"

That, along with defending former teammate and Chicago White Sox manager Ozzie Guillen for calling a sportswriter a "fag" and hurling anti-gay slurs in a restaurant located in a heavily LGBT-populated Dallas neighborhood, is why the Statesboro, Georgia, native was the most hated baseball player over his six-year career from 1998 to 2003.

So what happens when you put someone as volatile as the 6-foot-4 former National League relief pitcher on an island with 17 other people competing for a $1 million prize? Just about what you would expect.

Legendary hothead John Rocker will be on #Survivor. What other athletes would you want to see on the show and why? pic.twitter.com/fAFlpohuw9

John Loy Rocker and then-girlfriend Julie McGee participated on Survivor, one of the most successful and addicting reality shows ever. The 29th season -- Survivor: San Juan del Sur: Blood vs. Water -- of the hit reality series premiered on CBS in September 2014, and it pitted loved ones against each other.

If you've never seen Survivor, I'll try to briefly explain it. Two tribes both build shelter, make fire and find food and water on a remote island. They then compete against each other in challenges that are either immunity challenges -- if a tribe loses this they must vote someone off that night -- or reward challenges; the winner of the latter gains a reward of some sort.

Usually, the best players are under-the-radar personable people that also do well in challenges. They make friends and don't ruffle too many feathers.

Basically, the complete opposite of Rocker.

The bullpen pitcher with 332 strikeouts to his name originally tried to conceal his identity. He told other contestants he was former MLB pitcher John Wetteland, who actually kind of looks like him. Rocker selected an orange buff and thus was placed in the Coyopa Tribe. He aligned himself with a teammate and tribemate named Val Collins.

The first of Rocker's disastrous series of events on the show was when he faced off in a challenge against his girlfriend, McGee. She balanced a ball better and beat the piss out of him in the challenge, and he had a pretty misogynistic response for host Jeff Probst. (Scroll to 2:30 in the video above)

"Um, remove the friend part; I'm losing to a girl. I just got beat by a girl."

John must've forgotten that we're in the 21st century. Either way, it was hilarious watching him lose an athletic challenge.

Rocker and the Coyopa Tribe voted off Nadiya Anderson in the first tribal council, an event in which members of the tribe who lost an immunity challenge have to vote someone off. Voting off Anderson likely played a role in his later departure from the island.

Nadiya's sister, Natalie Anderson, yelled at Rocker following his final immunity challenge. She brought up his past racist and homophobic comments and told the Coyopa Tribe to vote him off.

That's when Rocker told her:

"If you were a man, I'd knock your teeth out" and "take all the stuff down and let's fight."

Many players on the show knew of Rocker's controversial statements back when he was an MLB player. Jeremy Collins, Val's husband, told people about Rocker's past and vowed that he would come after Rocker after he failed to save Val from being voted out. Rocker actually played a part in voting her out as well.

Rocker did relatively well in the physical parts of the game. He failed to understand the personal side of it, however. He won a challenge. He found an immunity idol, which protects players from being voted out if used during council. But any momentum came to a screeching halt following his argument with Natalie.

At the following Tribal Council, Rocker thought tribemate Baylor Wilson was being voted out and opted not to use his immunity idol. He was blindsided and voted off, 5-2. Josh Canfield, who had a boyfriend playing for opposing tribe Hunahpu, played a major role in the plot to blindside the man with a homophobic past.

Like that, Rocker (with an immunity idol still in possession that could've saved him) was gone on Day 8 as the third castaway voted off.

Most contestants are crushed when they exit the game so early. Rocker, however, was not.

He told Parade Magazine in 2014 that he was miserable and couldn't wait to eat after departing.

"I was happy to get voted out. I lost 19 pounds in 10 days. I never knew when I was going to eat again. It was miserable," Rocker said. "I thought going into it that there would secretly be bottled water and some food given to us but that was not the case. It is very real and very miserable. Once I got voted off all I wanted to do was eat."

Rocker isn't the only former professional athlete or coach to compete on the show, nor is he the first former Major League Baseball player to do so. Longtime MLB player Jeff Kent did well for himself on the show in season 25. Former NBA player Scot Pollard, former NFL player Brad Culpepper and former NFL and college football coach Jimmy Johnson all were Survivor contestants as well.

The former Braves pitcher basically was as well liked as he was when pitching in front of 50,000 angry New York Mets fans. Obviously, his personality didn't mesh well on one of the most cut-throat TV shows out there. Surprise, surprise.

Here's to hoping this is the last we hear of John Rocker.