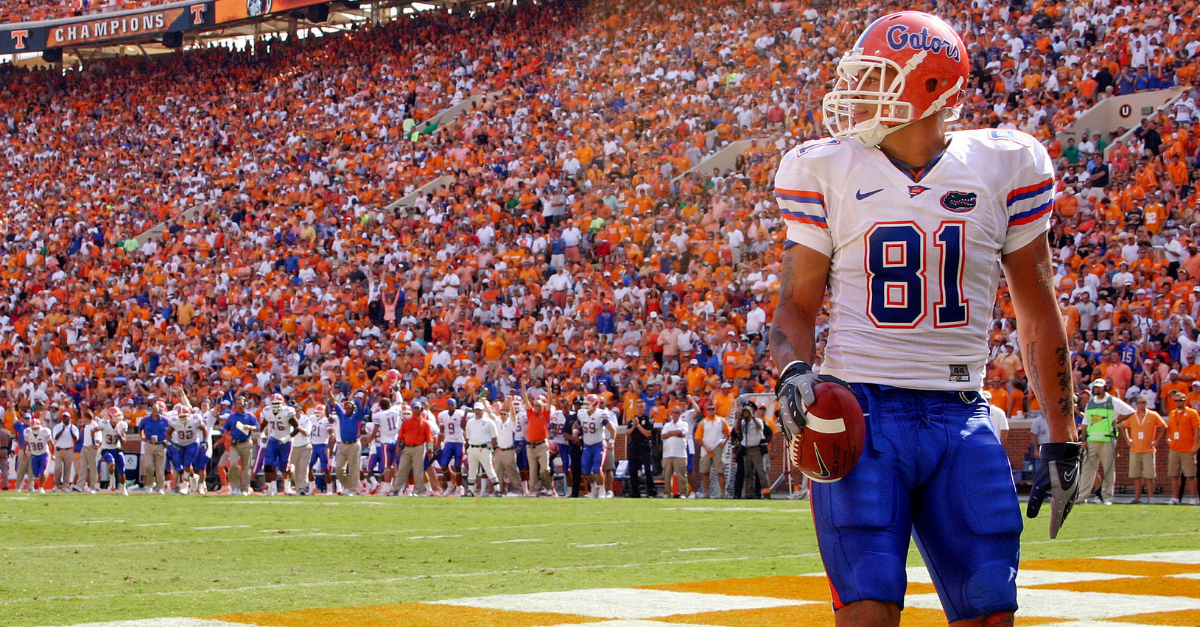 Aaron Hernandez’s life is a whole lot to unpack. Like, just returned from a three-week European vacation and don’t feel like emptying your luggage back into the closet.

His “chaotic and horrendous existence” began in Bristol, Connecticut, where an erratic upbringing featured his parents involved in crime. That, coupled with an older child allegedly molesting him as a young boy, inner battles over his sexual orientation, death of his father in 2006 and CTE in his brain are all likely part of why Hernandez evolved into a monster.

Hernandez was convicted for the first-degree murder of Odin Lloyd in 2015 and indicted on double murder charges of Daniel de Abreu and Safiro Furtado in Boston in 2012, while also settling a case regarding the Miami shooting of Alexander Bradley in 2013. He was acquitted of the Boston charges in 2017, and three days later, he hanged himself with a bed sheet in his prison cell in the Souza-Baranowski Correctional Center in Lancaster, Massachusetts, while serving a life sentence.

What’s overlooked about Hernandez’s tragic life and terrific but shortened playing career is the impact his time at the University of Florida had on him.

In Gainesville, he developed into a bona fide star college football player but also showed painfully obvious signs of turmoil and cries for help that no one really answered.

Meyer saw what the gifted Hernandez could become on a football field. He was a 6-foot-2, 240-pound tight end, but he ran like a wide receiver and could give linebackers fits in coverage. So Meyer enlisted Tim Tebow and assistant coach Steve Addazio, who had local ties to Connecticut, in persuading Hernandez away from the University of Connecticut, where he wanted to play with his brother D.J.

According to The Boston Globe, Meyer at one point flew up to Bristol Central High School, where he convinced the principal to let Hernandez graduate more than a semester early. By 17, he was on UF’s campus learning the playbook while adjusting to college life hundreds of miles away from home.

At such a young age, Hernandez wasn’t ready for the rigorous schedule of a student-athlete. He struggled in the classroom and had to take remedial courses at nearby Santa Fe Community College. According to friends, he never emotionally handled the death of his father, Dennis Hernandez.

Still, Hernandez first encountered trouble with the law during that transition freshman phase, the first of two incidents in what was just the tip of the iceberg of Hernandez’s run-ins with police.

Hernandez’s first real sign of his looming rage came in a bar — The Swamp Restaurant — when he was 17 and out with none other than Tebow.

The bulky, tattooed tight end, obviously not of drinking age, failed to pay a two-drink bar tab and sucker punched the bar manager in the head, rupturing his eardrum. Hernandez said he thought a fan had paid for the drinks and admitted to hitting the manager.

Any sensible person would expect charges to be filed, a felony or something to come of this. Surely one can’t swing on strangers and get away with it, right?

Tebow and Hernandez called up Meyer, who worked his typical magic (read: he called the team’s unofficial defense lawyer, Huntley Johnson, to resolve things) in covering up incidents like these. No charges were ever filed and the incident went unreported for years. The school said there was no settlement or agreement with the victim.

This made it clear to Hernandez: He could get away with much more than your average person simply because he played football for Florida.

Months after the bar fight in 2007, Hernandez was investigated for a double shooting in Gainesville. Nothing came from it.

Three men were sitting at a stoplight on their way home after spending time at a night club. A man walked up and fired five shots into the car, hitting one in the back of the head and one in the arm. One passenger described the shooter as a large Hispanic man with tattoos and picked Hernandez out of a police lineup.

Hernandez and his accompanying teammates who were at the same nightclub — the Pouncey brothers and safety Reggie Nelson — were wanted for questioning by a Gainesville police detective. They didn’t arrive for four hours.

Why? The detective, Patty Nixon, learned they were visiting with the same lawyer who had advised Hernandez in the bar fight.

Each player answered questions, except for Hernandez, who refused. The man shot in the head underwent immediate surgery following the incident and later told police the suspect may not have been Hernandez but assumed it was because he was involved in an altercation at the club earlier.

What no one mentioned until years later was that Hernandez had a friend from Bristol staying with him at the time and would’ve been a person of interest. Again, no arrests were made.

Hernandez’s string of trouble followed into the season opener of the 2008 season. The tight end was suspended for the first game against Hawaii for failing a drug test.

Smoking weed was commonplace for Hernandez, who blazed up often in high school and reportedly told his lawyer, Jose Baez, he was high every time he stepped on the field at UF.

Reports of Hernandez failing multiple drug tests over his time at Florida — which would’ve had to have been brushed aside by Florida Gators football staff — didn’t surface until 2010 during the pre-draft process.

That certainly affected his draft position, but the New England Patriots took a chance on him in the fourth round of the 2010 NFL Draft. He wound up becoming an NFL star and Super Bowl champion during his three seasons in New England.

Despite all the bad and ugly Hernandez found himself in off of the field, he was still able develop into the best tight end in the country for the Gators.

After seeing limited action as a freshman in 2007, he began to break out during Florida’s national championship season in ’08. He finished with 381 receiving yards on 34 receptions and five touchdowns, including a team-leading 57 yards on five catches in UF’s 2009 BCS National Championship win over Oklahoma.

The following season, Hernandez won the John Mackey Award for the NCAA’s most outstanding tight end. He was Tebow’s go-to receiver, hauling in 68 passes for 850 yards and five touchdowns.

His 68 receptions not only led all tight ends that year, but he also set the UF records for most receptions by a tight end in a season and in a career (111).

It was clear Hernandez’s skill set was ready for the NFL, but he wasn’t.

Many teams had Hernandez off their draft boards completely, but Robert Kraft and Bill Belichick felt he was worth the risk as a mid-round pick. Though he was a bit undersized for a tight end, his talent as a pass-catcher was never a question.

Not even the Patriots — the Last Chance U of the NFL known for taking risks on wayward players (LeGarrette Blount, Aqib Talib, Randy Moss, Josh Gordon) and sometimes striking gold — could keep Hernandez away from his old hometown crowd and inner demons.

They released him when he was arrested and charged with the murder of Odin Lloyd, a semi-pro football player who was dating Hernandez’s fiancee’s sister.

Regardless, it’s clear Hernandez wasn’t ready for college football when he stepped foot on campus. It didn’t help that Meyer expedited his transition to the university, a move that ultimately may have turned him into a superstar athlete but a dangerous villain.