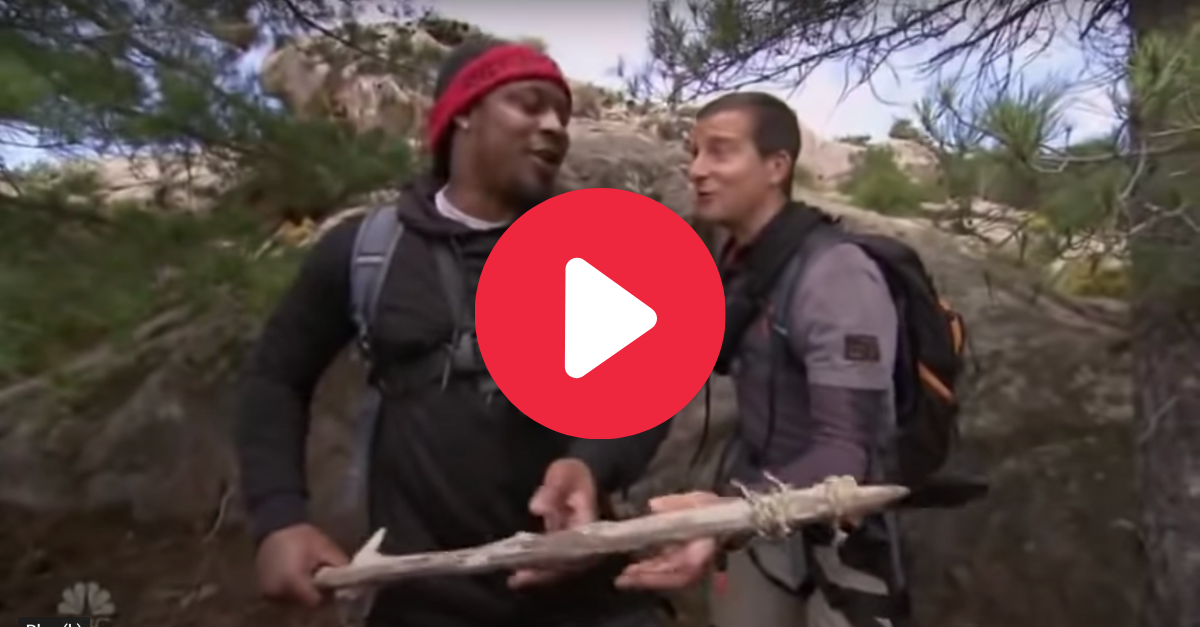 Marshawn Lynch is a true national treasure that we must protect at all costs. Sure the NFL running back is a Super Bowl champion, five-time Pro Bowl player and scored nearly 100 touchdowns in all with the Seattle Seahawks, Buffalo Bills and Oakland Raiders, but that isn’t what makes him everyone’s favorite player.

The “Beast Quake” originator has never taken life seriously and has an incredible sense of humor. Remember his golf cart joy ride in college? How about his hilarious high school interview or the time he returned to Seattle and brought a million Skittles as his plus-one?

Beast Mode may be a fun-loving guy off the field, but he’s one of the most ferocious competitors on the gridiron. That’s how he earned his well-known nickname. Lynch never backed down to any human being, but it turns out he’s a bit skittish when he’s out of his element.

It’s fitting that a man who’s made millions of dollars “running wild” against NFL teams joined forced with the one and only Bear Grylls on the NBC TV show “Running Wild with Bear Grylls.” Lynch is one of many athletes and celebrities that have starred on the show such as Shaq, Drew Brees, Deion Sanders, Zach Efron and Barack Obama.

Lynch, who hails from Oakland, California, joined the adventurer and survival expert in the middle of France’s Corsican mountains back in 2016 for an episode. The two-day adventure where the French Foreign Legion trains its soldiers absolutely did not disappoint.

The fun begins when Grylls spots a pile of fresh pig poop, signaling that a wild hog was nearby. Grylls hands Lynch a makeshift spear and, despite asking for a gun to kill it, the NFL star seems ready to engage. Until he spots the hog that probably weighs more than he does.

“We finna go run up on a hog right now,” Lynch begins. “That ain’t no little ass animal. That big ass thing right there? Hold on, didn’t you say this thing was aggressive?”

They eventually scare the hog to its bloody death on a cliff and have to rappel down the mountain to get it, which Lynch is not exactly a fan of doing. He even gets to chop it up! The full episode contains a ton of moments, quotes and life lessons that had us in stitches such as:

Marshawn Lynch then leaves a message for viewers at the end of the episode.

“Would I do it again? Probably not. But I would encourage you if you haven’t done anything like this, do s*** you ain’t never done before. That’s what Beast Mode is all about right there.”

What will Marshawn Lynch do next?