"Moneyball" is the story of the unexpected success of the Oakland Athletics in the early 2000s. It was first told as a book by Michael Lewis in 2003 and then adapted into a movie in 2011. The movie stars Hollywood legend Brad Pitt as Oakland A's General Manager Billy Beane and focuses on the 2002 season.

The A's had reached the ALDS in 2001, but in the ensuing offseason, they lost their superstar first baseman Jason Giambi (MVP in 2000, runner-up in 2001), closer Jason Isringhausen (67 combined saves in '00 & '01) and outfielder Johnny Damon. 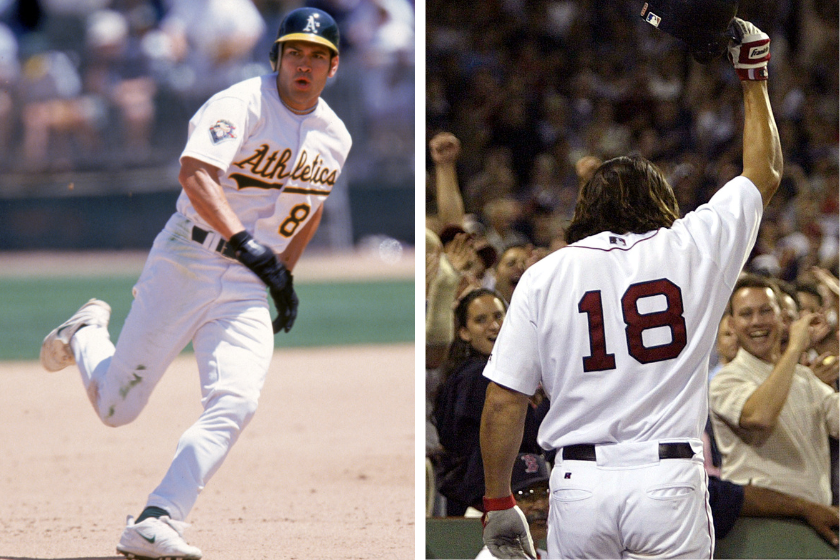 These departures and the A's extremely low payroll made a return to the postseason seem downright implausible. The book/movie go on to tell a very compelling story of how the A's season goes.

That's not what we're here to discuss. Instead, let's focus on Damon's departure specifically. In the movie, Jonah Hill's character Peter Brand (based on real-life former A's executive Paul DePodesta) uses Damon as a way to prove to Beane he has a sabermetrics view that Oakland needs. Brand says:

"You're trying to replace Johnny Damon. The Boston Red Sox see Johnny Damon and they see a star who's worth seven and half million dollars a year. When I see Johnny Damon, what I see is... is... an imperfect understanding of where runs come from. The guy's got a great glove. He's a decent leadoff hitter. He can steal bases. But is he worth the seven and half million dollars a year that the Boston Red Sox are paying him? No. No. Baseball thinking is medieval. They are asking all the wrong questions. And if I say it to anybody, I'm-I'm ostracized. I'm-I'm-I'm a leper. So that's why I'm-I'm cagey about this with you. That's why I... I respect you, Mr. Beane, and if you want full disclosure, I think it's a good thing that you got Damon off your payroll. I think it opens up all kinds of interesting possibilities."

While this is a great part of the movie, and leads to the A's acquiring Scott Hatteberg (played by Chris Pratt), Jeremy Giambi and David Justice, it's incredibly dismissive of Damon as a player. In some ways it seems like the Red Sox/Damon are to blame for the competitive disadvantage the A's are facing. This completely undersells Damon's value as a baseball player, and it pissed off Damon too, as he mentioned on the Section 10 podcast:

The most unfair part of this whole thing is the Damon/Red Sox contract might be one of the best examples of a contract working out for a team. So, what Brand says is bad value was incredibly beneficial to the Red Sox. 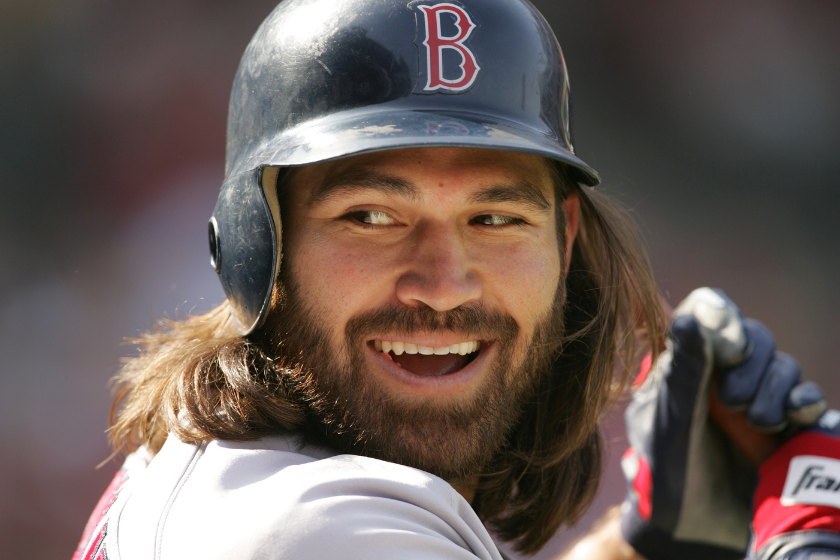 The Damon/Red Sox union was a perfect match from the beginning. The 2001 Red Sox offense was seventh in the AL in runs, eighth in on-base percentage and last in stolen bases. The team also saw poor production from the top of the order as Sox leadoff hitters put up a .243/.312/.354 slash line for the season (compared to the AL average of .270/.331/.397).

Damon did all of those things well. His 2001 was disappointing as his slash was .256/.324/.363, but his season was really a tale of two players. In the beginning of the season, the A's played Damon in feft field, but when he was switched to center field in June, his offensive output took off.

The Red Sox signed Damon to a four-year, $31 million deal in December of 2001. The best part for the team was ensuring Damon's time in Boston would coincide with most of his prime. An MLB player's prime is said to be between the ages of 27 and 30. Oftentimes in free agency, a team will need to provide extra years at the end of a contract to have a player during their prime years. Avoiding this risk was the first win for Boston with this deal.

Damon got his side of this deal as well. His $7.5 million salary in 2002 was more than three times the average MLB salary ($2.3 million). While Damon was taking home an impressive fee, the Sox were still making out very well. Craig Edwards of FanGraphs theorized the cost of a win in free agency in 2020 was around $8.6 million and this piece by Matt Swartz has the 2006 number at $4.8 million. After adjusting for inflation that meant it was $4.3 million for one win when Damon signed his deal before the 2002 season. His performance in Boston would be the second win for the Sox.

He also was part of two amazing Red Sox playoff runs while playing a vital role in a couple of the most memorable postseason moments. Unfortunately for Damon, these were both good and bad moments. On the downside, Damon's gruesome collision with Damian Jackson in Game 5 of the 2003 ALDS still haunts Sox fans. The most shocking aspect is Damon only missed two games after this hit, returning in Game 3 of the ALCS. Click to watch the replay at your own risk.

On a more positive note, Damon delivered the blow that seemed to seal the Red Sox epic 2004 ALCS comeback. Damon led off the game with a single to left field. He would try to come around and score on a Manny Ramirez single one batter later but was thrown out at home. Fun fact, Ramirez had 0 RBIs in the 2004 ALCS.

David Ortiz hit a two-run home run immediately after Damon was thrown out to give the Sox a 2-0 lead. Damon returned to the batter's box with the bases loaded in the top of the second inning. On the first pitch of the at-bat, Damon sent a deep fly ball into the right field stands, giving Boston a commanding 6-0 lead. Two innings later he did it again, this time hitting a two-run home run and extending the lead to 8-1.

Damon was also worth 16.5 WAR over his four years in Boston. Going back to Edwards' theory, this should have cost the Red Sox $71 million over the course of Damon's contract. Instead, the Red Sox were paying less than half of that.

To repeat, Damon's contract in Boston was used as an example in "Moneyball" of antiquated thinking in baseball and one that was sure to provide poor returns for the Sox. Maybe avoiding that stink was why the character had to be given a fictional name?

Helping Out the Rival 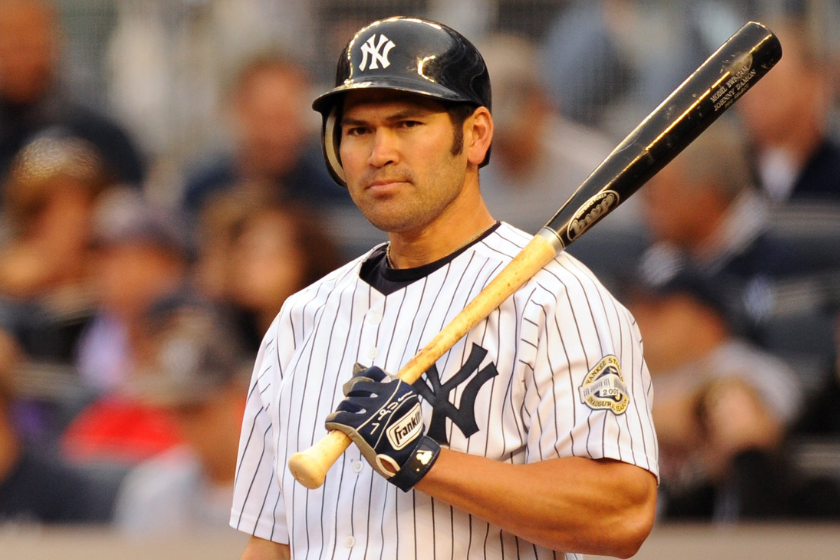 When the contract was over after the 2005 season, Boston felt it was time to cash in their chips. Damon left to sign another four-year deal with Derek Jeter and the dreaded New York Yankees. The main difference between the two deals was the Red Sox paid $31 million for Damon's aged 28-31-year-old seasons while the Yankees paid $52 million for seasons aged 32-35.

It seemed like New York would regret spending this investment on an aging outfielder who seemed to have his best years behind him. However, Damon proved to be one of the best free agent values a team has had for the second time in his career.

He again was incredibly durable, never playing less than 141 games. He put a .285/.363/.458 slash line, which included a higher OPS than his time as a Red Sox. Damon also averaged 102 runs, 19 home runs, 74 runs batted in and 23 stolen bases as Yankee, all comparable or better than his Boston run.

Damon also was worth 14.4 WAR during his time in the Bronx. His contract with New York should have cost the Yankees $69.1 million (remember the 2006 number was $4.8 million for 1 win) but they paid just three-fourths of that.

Damon accomplished quite a bit as a professional ballplayer. Despite what "Moneyball" tried to say, he was also one of the best free agent values during the early 2000s. And in case you haven't seen the movie or read the book, this story probably spoiled it for you that the A's lose to the Minnesota Twins in the end.

MORE: 15 "Moneyball" Quotes That Prove Baseball is a Game of Adapting or Dying