Bush League: Astros, Verlander Should Be Embarrassed for Denying Access to Reporter 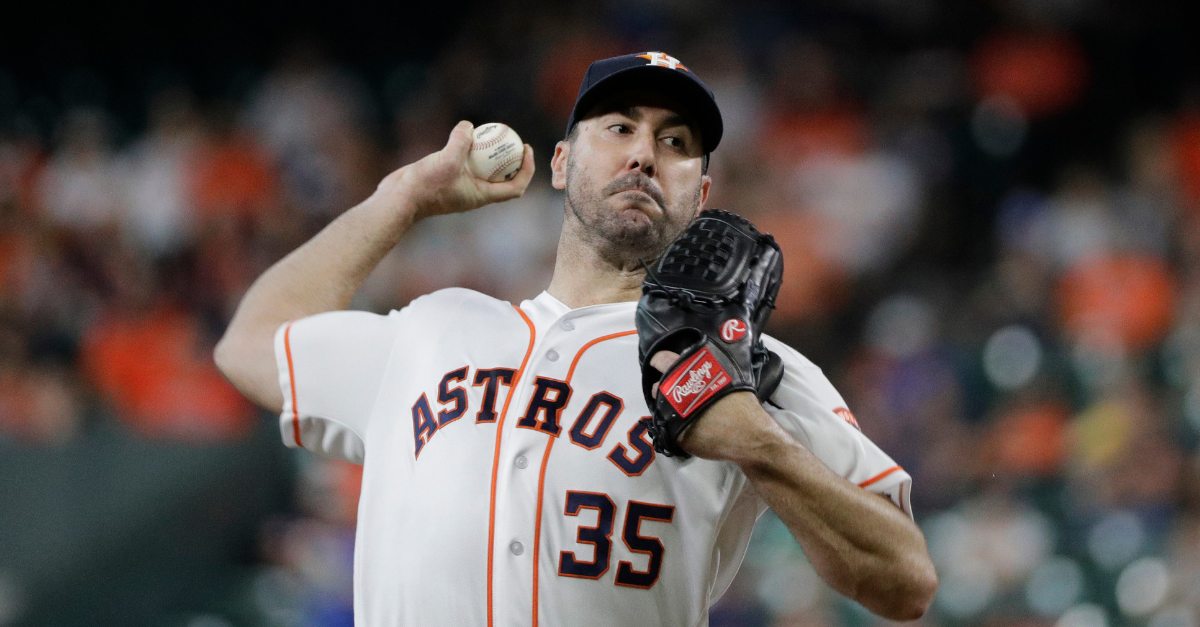 Look, it’s fair to not like a reporter. Sometimes working members of the media miss the mark, like Darren Rovell when he got dragged for telling LSU gymnastics they couldn’t put up a congratulatory billboard.

In the heat of the moment after a painful loss, I totally understand an athlete not wanting to play 20 Questions with a horde full of quote-hungry journalists. That’s why Major League Baseball has already seen one manager curse out a reporter while one of his players threatened him for no good reason.

But amid Justin Verlander and the Houston Astros’ latest bush league stunt, this trend has got to stop.

In case you missed it, I’ll give you the full run-down of what happened.

Verlander threw a heck of a game Wednesday night. He truly did. The 36-year-old pitched a complete game, struck out 11 and surrendered two hits, both of which were solo home runs. Verlander received little run support and the Astros lost, 2-1. It was the largest single-game upset in 15 MLB seasons.

Verlander was probably not happy, but it happens. It’s baseball. Verlander should know that by now.

We hear from Justin Verlander after he loses to his former team despite throwing a complete-game two-hitter and striking out 11. pic.twitter.com/2Y6s1voKTD

Here’s where the Bush League-ness begins.

Anthony Fenech, a Detroit reporter for the Detroit Free Press, made his way down to the clubhouse along with other reporters but was barred by Astros security officials from entering. Verlander told Astros vice president of communications Gene Dias he would not speak to reporters if Fenech was present.

Why? Because of what Verlander called “unethical behavior in the past.” The pitcher tweeted that vague phrase then said he reached out to the Free Press asking for a substitute from the paper. The Free Press reported his agent left a voicemail for sports editor Chris Thomas on Wednesday at noon and one for executive editor Peter Bhatia Thursday morning, not even close to a reasonable enough heads up to send someone else instead of Fenech for a game THAT NIGHT.

Although I tried to avoid this situation altogether, I’ve still reached out to @freep multiple times today with no response. They’re still not interested in my side of the story.

Strike one. That’s not how this works, JV. You are not the sports editor of that newspaper. You don’t get to decide which reporters do and don’t ask you questions. You don’t get to decide who can and can’t do their job. Your job is to throw baseballs and, when the time comes, answer questions from all credentialed media however you please. Hell, do what Marshawn Lynch did to the NFL media if you don’t feel like talking.

Whether you feel like Verlander had the right to pull this doesn’t really matter, because it isn’t allowed in the MLB’s Collective Bargaining Agreement, as Fangraphs‘ Dan Szymborski tweets. The Houston Astros violated their contractual obligation with MLB at Verlander’s request.

Then, the club embarrassingly backed him in a statement:

“Reporter Anthony Fenech was delayed temporarily from entering the Astros clubhouse following last night’s game. This course of action was taken after taking into consideration the past history between Fenech and one of our players, Justin Verlander, Verlander’s legitimate concerns about past interactions with Fenech, and the best interests of the other media members working the game. We chose to prioritize these factors when making this decision.”

Fenech contacted MLB vice president of communications Mike Teevan and was granted access to the Astros’ clubhouse but only after Verlander was finished with his postgame media session. Fenech said he approached the losing pitcher that night, to which he said, “I’m not answering your questions.”

That, right there, is all you have to say. No one has a problem with that. Verlander can say that and get in zero trouble.

But denying access to a reporter? Nope, sorry. Inexcusable.

MLB backed Fenech and the Free Press in a statement:

“Per our Club-Media Regulations, the reporter should have been allowed to enter the clubhouse postgame at the same time as the other members of the media. We have communicated this to the Astros.”

As did the Baseball Writers’ Association of America president Rob Biertempfel:

“The Baseball Writers’ Association of America is alarmed by the Houston Astros’ decision to restrict the clubhouse access of a reporter from the Detroit Free Press after Wednesday’s game against the Detroit Tigers. This action by the Astros violated the MLB club-media regulations, which are laid out in the Collective Bargaining Agreement, and the BBWAA expects MLB to respond accordingly and promptly.”

I don’t know what past history Verlander and the Astros are referencing, but I’m going to use context clues here and guess he and Fenech still have some bad blood from their time in Detroit.

The Tigers beat Justin Verlander again. They continue to win the trade.

I don’t know why Verlander harbors hate toward Fenech. What I do know is if I were making $28 million and was still one of the best pitchers in baseball as I approached 40 years old, it would take a lot to get under my skin.

Fenech said in a statement he was extremely disappointed with the Astros:

“I’m extremely disappointed with the Astros’ inexplicable decision to limit my Baseball Writers’ Association of America-credentialed clubhouse access on Wednesday night. In my time as the Tigers beat writer for the Free Press, my foremost goal has been fair and ethical coverage. I am confident that goal has been clearly and consistently achieved in my body of work and with the personal and professional way I build relationships across baseball. As I do with every player in the clubhouse each season and dozens around the game whom I have covered over the past five years, I wish Justin Verlander good luck and good health for the remainder of the season.”

What happens next should be some sort of fine from MLB, which I’m sure Verlander and the Astros were fully aware of. That doesn’t excuse the fact that Verlander acted like an immature baby afraid to face a single reporter.

Verlander will be in the Hall of Fame one day and the Astros are a perennial World Series contender, but they should both feel embarrassed for themselves after this saga.